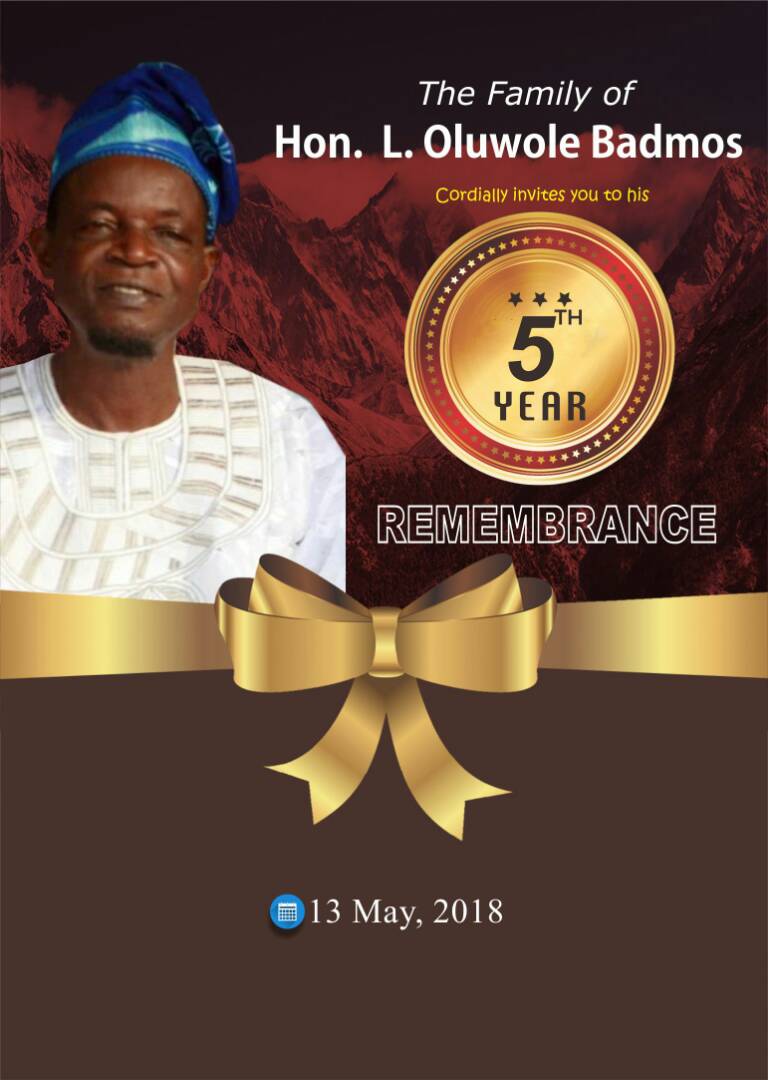 Talking about a remarkable day for the entire family of late Hon. Laisi Oluwole Badmos, father of CSP Dolapo Badmos, the 13th of May, 2018, can never be forgotten in a hurry by the family as dignitaries and celebrities thronged Ruby Garden Event Centre by Oando Filling Station, Lekki to celebrate with CSP Dolapo Badmos and her siblings as they remembered their dad 5 years after his death.

Hon. Laisi Oluwole Badmos, in his life time, according to his daughter, CSP Dolapo Badmos, was a man of honour; a man of integrity and an epitome of Peace, who played politics of peace that was devoid of rancour and bitterness. In her post on social media about her dad she wrote: “5 years down the lane, daddy, your death is still fresh in my memory. The vacuum created by your death can never be filled. The shoes you left are too big for anyone to wear. It is painful. How I wished you stayed, at least, 5 years more, but who are we to question God.

“During your lifetime, you believed whatever happens to a person is known to God. That is why you always said: “Amuwa Olorun Ni” i.e. it’s destined by God. We believed God destined you to leave that early, and who are we are we to question Him?”

“Daddy, we are still living the exemplary life you taught us. You radiated love and peace, while you were alive. The path which we your children have vouched to follow”.

“You cared so much about integrity and honour of your name (no wonder you remained honourable till your death) that integrity and honour of your name we will uphold at all cost! You played politics of peace devoid of rancour and bitterness, I could imagine how harrowing it was to maintain love and played politics without bitterness in Nigeria politics, no wonder you died without any political enemy, as tough as politics is, you left with your shoulders held high, no blemish on your name. Adieu my daddy! You came, you saw and you conquered. Rest on daddy. We love you dearly”.

WHAT YOU NEED TO KNOW ABOUT LATE HON. L OLUWOLE BAMDOS

The late Alhaji Hon. L. O. Badmos hailed from the family of the late Pa and Ma Gbadamosi Omotayo of Ado-Ekiti. He was married to his heartthrob, Mrs. Elizabeth Ebunolorun Badmos, a union that produced successful children and wonderful grandchildren.

Alhaji Badmos fondly called Educationist, by associates was an astute politician and a business man. As an Educationist, he tutored younger ones to excellence. He was a teacher, who raised enviable hands.

As a politician, he was loved by all and sundry, this was evident when his constituents voted him to represent them in the State House of Assembly in the year 1983, an election that was defended against every challenge.

Alhaji was a mobiliser, a grassroots man and a lover of his people, the attributes that earned him the title “My Leader”.

He played politics devoid of hate, violence, rancour and corruption, no wonder at his death, condolences came in waves from all political parties.

As the Executive Chairman of Ado Ekiti Local Government, My leader implemented both human and infrastructural developmental projects many of which are still very evident in Ado-Ekiti taday. Hon. L.O. Badmos, all through his life, stood for tranquility, discipline, truth and  reliability. He was an embodiment of peace and hardwork.

ABOUT THE NGO TO IMMORTALISE HIM

An NGO was announced by Lieutenant Ayo Badmos, one of the children of the late Badmos to immortalise him. It would be a foundation registered in his name Hon. L. O. Badmos Foundation.

A foundation that will ensure youth development by paying WAEC and JAMB fees of indigent students from Ado-Ekiti. There would also be an edifice that will serve as a skill acquisition centre to train younger ones who may need to acquire required skill.

Sheik Lukman Badmus, Imam Abdulhammed Abduazeez, Sheik Jamiu Badmus, Ustaz Shamsudeen, Ustaz Sodiq, Ustaz Mutiu were the clerics on ground from Jakfaz Central Mosque, Akute, Ogun State to pray for the children, family members and friends. They started with recitations from Holy Quran before the children were invited to the podium.

Flanked by Dr. Boboye of the FRSC on the headtable was the Ogun State Commissioner of Police, Mr. Ahmed Iliasu, who also came with his entourage to honour CSP Dolapo.

Saheed Balogun, a veteran actor, Filmmaker, Director and Producer, compered the event. He spiced the event with jokes. There were lots of side attraction.

Undisputable Juju Queen and the President, Association of Juju musicians of Nigeria, Queen Ayo Balogun, was the musician of the day. Queen Ayo Balogun is an Entertainer who knows how to make people dance.

AND RUKAYAT GAWAT OYEFESO TOO

Rukayat Gawat Oyefeso, a top Islamic female musician and daughter of a popular TV personality, Alhaji Rasaq Aremu Gawat, who also won the City People Entertainment Award for female in 2016 and City People Music Award for Islamic Artist 2017 was at the event with her full band. She was invited by the M.C. to perform for 30 minutes.

The life and time of the late Hon. L Oluwole Badmos was read by one of his sons, Lt. Col. Ayodeji Badmos, who spoke about their father and the foundation they have registered to immortalise him.

The event was planned by Ebony Events who was flown in from London by CSP Dolapo Badmus. CEO Luminee is the fashion designer, while Jumrash Concept made the Aso-Oke. Foods were served by Ademoj and Pisces Catering Services. Small chops by Laredo Small Chops. Fish served by Simply Delicious, while the drinks were served by Bonix Drinks. And Faaji decoration did the beautiful decor. The efforts of these people made the event a memorable one. Let it be on record that everything was a surprise that day. Lest we  forget, City People gathered from the Grapevine that the event planner was flown in with 7,000 pounds. Delectable Ushers by Orange Events added colour, while Palmwine was served by Ofada Boys. To crown it all, CSP Dolapo Badmos and her younger sister Omolara Badmos Ajose played a perfect host to the guests.