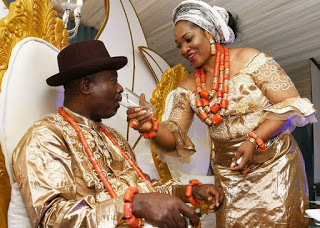 ABOUT THE COLOURFUL ENGAGEMENT

The memorable traditional engagement was held on Saturday, 11th August, 2018, at the bride father’s house at 15, Oke Esho Street, off Oba Adesida road, Akure with the  families of the bride and groom in attendance. The pretty and elegant bride was looking glamorous in her stoned-sky- royal blue Asooke by Ferdiedem Fashion, matched with champagne gold shoes and bag. The prefect make-up was the touch of RubyzBeautyPro run by Usman Adetutu Bisola, while the handsome groom was looking supper in his sky and navy-blue Aso-Oke Buba, Sokoto and well-designed Agbada on top. The engagement was anchored by a former teacher of the bride, who retired as a principal, Mrs. Ola Akapa aka Iyawo Isobo. She played the role of both Alaga-Iduro and Alaga-Ijoko and for the 2 hours that the event lasted, there was no dull moment for both families and guests.

The 95-year-old father of the bride, Pa Samuel Olatunji Eddo, looked good in his Agbada, though owing to old age, he was represented at the reception held at OSDPC Hall, Ijabo by his brother, High Chief Olu Eddo, the Sasere of Akure kingdom. Mrs. Oluranti Fasoranti stood in for the late bride’s mother,   Mr. & Mrs. Mike Momoh represented the groom’s parents, Prince Daniel Ojite Ohwovoriole. They all looked good in their attire. The bride’s father is a crossbreed of Ondo and Edo States.

The beautiful couple was ushered into the well-decorated reception venue at the OSDPC Hall at Ijapo Estate, Akure by friends including wives of Ondo state commissioners. The couple was looking good and radiant  in their champagne gold Irobo outfits, as they danced to the beat of Ayo Rawlings Band.

GOV. AKEREDOLU  AT THE RECEPTION

Ondo State Governor, Arakunrin Rotimi Akeredolu (SAN), who was the chief host of the event, could not attend the traditional wedding, but he was at the reception. He arrived in company  of his Chief of Staff, Chief Gbenga Ale, Rt. Hon. Taofeek Abdusalam Commissioner for Works, among others in his entourage.

Her Excellency Arabinrin Betty Anyanwu-Akeredolu, wife of Ondo State Governor, Arakunrin Rotimi Akeredolu (SAN), came to support and honour the Ondo State Commissioner for Women Affairs and her new husband as they exchanged vows. Mama dignity as the first lady is called looked good in her Aso-Ebi.

WIFE OF THE DEPUTY GOVERNOR, MRS. AJEWOLE, WAS THERE

The wife of the Deputy Governor of Ondo State, Mrs. Ajewole Agboola, arrived before the couple was ushered in at the reception. Aside the fact that she is close to the bride, she was there to also represent her husband, Arakunrin Alfred Agboola Ajayi, who couldn’t make it to the party.

PRESIDES AT THE EVENT

One of the important personalities, who honoured the couple was the State Chairman of APC (All Progressive Congress) in Ondo State, Engr. Ade Adetimihehin, who stormed the reception in company of his Exco members.  Aside being a VIP guest, he also doubled as the Chairman of the occasion and during his speech, he advised the couple to live as one and not allow a third party to meddle in their marriage. With him was the Deputy Chairman, of the APC, Chief Dele Falusi.

WEDDING CAKE BY SALT AND SUGAR

The 9-round-step cream cake which had a touch of rose added class to the party as the wedding cake was a beauty to behold Hon (Mrs.) Celica Ifayose, a member of the Federal Commission on PCC, coordinated the cutting of the cake. The cake had cream and gold with royal beads on it.

The wedding account between Barr. Matthew Tive and his heartthrob, Hon. Omowunmi, would not be complete without mentioning the excellent decor done by Akure-based event decor, P-Square Decoration at Oyemekun road, Akure. The hall was transformed into a pleasant and warming hall. Psquare played with Sky blue white with rose and candle light to brighten the hall. The décor was a job well done.

Not many knew that the bride, Hon Omowunmi Olatunji and Hon. Adijat Adeleye Oladapo, are best of friends and their friendship is over a decade now. They were both 2- term lawmakers at state House of Assembly, while Hon Adijat was a lawmaker in Ogun state, Hon. Omowunmi was a lawmaker in Lagos State. Aside being the chief bride’s maid, this elegant and stylish Ogun celebrity lady was very supportive as she was up and doing till the party ended. She came in company of Mrs Omolola Jadumiye (CEO Ogefinz Makeover) and Engr. Tunde Olaleye.

That the groom was a UK- based person is no longer news as his friends stormed Akure in a big way. Orode Moses Oyiki, a barrister and advocate of the Supreme Court of Nigeria and Ireland, was the best man. He flew in from UK to honour his friend. Others are:  Patrick Mogbolu, Victor Edughele, Henry Ibhade (FCA), Paul Ezike, Shaka Bello, Christopher Okoduwa, Patrick Ihezie, Abiodun Olatidoye, Barr. Bola Olodo, Kehinde Adeniyi, Dogood Waribebe and Mogbolu Victor were present to support the couple.

The gist will not be complete without mentioning the special performances by Tola Sax, who literally set the hall on fire with her praises, while the award-winning Ondo state Cultural troupe thrilled the guests, as Anike pekelemei also performed.

Mrs. (Rev.) Oladapo is one of the sisters and a second mother of the bride.  According to her, she had been nurturing the bride for over 20 years before the bride’s mother pass on. She disclosed that the bride’s mother handed over Omowunmi to her. She and her husband, Dr. Oladapo, were happy for the couple and they shared in their joy. Rev. (Mrs.) Oladapo gave the opening prayer at the traditional marriage,

Prince Afolabi Obasuyione of the APC Ondo Central Senatorial district aspirant was one of the few celebrities who witnessed the traditional marriage before he left for another function.

OF ASSEMBLY SPEAKER TOO

Going by the Yoruba tradition, the dowry of a bride paid to the bride’s family is usually returned  to the groom’s father. Though dowry is always part of the (Eru Iyawo) brides kit. In Omowunmi’s case an undisclosed amount was paid by the groom and it was received by High Chief Olu Eddo,  the Sasere of Akure kingdom on behalf of the family. It was, however, later returned to the groom’s family by the bride’s family saying that their daughter is not for sale, but they took #500 (five hundred naira) for the bride’s father, according to him that is their own tradition.

These two celebrities men of God, Prophet Gbenga Akinbiyi General Overseer of CAC Promise Land Akure and Pastor Tuoyo Ojuyah are the senior pastor of KICC, Akure Ondo state and his wife, Mrs Bunmi Ojuyah came to honour the couple. The bride is a member of both churches. Prophet Gbenga Akinbiyi led the opening prayer at the reception.

THE EDDO FAMILY IN ATTENDANCE

Though, the Deji and  paramount ruler of Akure Kingdom, Oba Ogunlade Aladetoyinbo, Odudun II, could not attend the event, but his staff of office was there to represent him. Also the Oba Oyedele Olumoyegun, the Oniju of Iju Odo came too.

Honylinks Event and Jokem Fruties & Event took charge of the drinks and fruit respectively and they ensured the guests were satisfied. The reception was anchored by two popular masters of ceremony (MC) Steve Shotomiwa aka Sweet Steve and Olamiposi Odofin anchored the party, while Oluomo Ayo Rawlings Rogbuwa, who is the official musician for Ondo state government, was on the band stand as he thrilled guests with his music.