A correspondence between Oba (Dr) Lamidi Olayiwola Adeyemi III, Alaafin of Oyo and Oba (Sir) Adesoji Aderemi I, the Ooni of Ife in 1976, on the SOOKO of ITAKUN in IKIRE in the attempt to wear the mystical Great Beaded Crown.

The Oni of lfe,

My Dear Oni of Ife,

My attention has been drawn to a publication in the Sunday Sketch of July 18,1976, Page 2, showing the installation of Oba Mudashiru Akinloye Oyekanmi as the new Sooko of Itakun, Ikire. As it can be seen in the photograph, the caption reveals that some Chiefs from lle-lfe gave the Oba a beaded-crown on your behalf.

As you are aware, the issue of minor chiefs wearing beaded crowns has generated hot controversies which prompted the government to enlist the support of leading Obas to give it some guidelines on the matter in order to arrive at a wise judicious decision on “who is who” among crown-wearing Obas in Oyo State.On the other hand, you will recollect that apart from the Council of Obas facing the problem posed by minor chiefs scrambling for beaded crowns, it was your good-self who told us in one of the meetings of the Council of Obas that you are the only ruler in Ife Division who is traditionally entitled to wear a beaded crown.

From a careful consideration of the photograph in question and the timing of awarding of a crown to a minor chief under Akire of Ikire after telling members of the Council in their meeting that the Akire himself has no right to wear a beaded crown, it appears to me that an elder Oba of your high position has reduced the burning issue of beaded crowns to a thing similar to awarding a contract to a contractor of one’s liking irrespective of qualification and expertise for the job.

Personally, I do not think you are helping the issue if you sent your Chiefs all the way from Ife to install a Chief with a crown when the leading Chief- the Akire – in the area has no crown.

I am requesting that when next we hold our meeting, you should assist us to get a list of all minor chiefs who have received modern crown from you.

However, let me draw your attention to what you said publicly at the Conference of Obas and Chiefs in Ibadan which took place between 7th and 9th of May, 1959 concerning the vexed topic of indiscriminate wearing of beaded crowns by Chiefs who were not entitled to do so. Before I quote you, I should say here that those of us fighting tooth and nail now, to preserve our fathers’ traditional dignity have seen in your 1959 endeavours on beaded crown issue, a befitting struggle championed by you to nip in the bud the germination of a deadly seedling among edible ones. Surely you must have got some historical record to support the crown you passed on through your Chiefs to the Sooko of Itakun. In order not to keep us in the dark on this, it will be praise-worthy if you can let me have the history for my perusal and understanding. 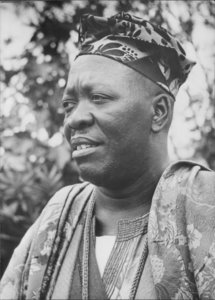 “In the course of our deliberations at Benin City last year we touched on, the question of indiscriminate award of spurious titles to people by the Obas and Bales as also of illegal wearing of crown by chiefs who were not entitled to do so. It was hoped then that the Council, now Committee of Obas and Chiefs would be able to deal with this matter in their meetings during the year but circumstances did not afford it an opportunity of meeting until shortly before this Conference just in haste to give decision on very urgent matters and to discuss some bills. I regret to say that during the year, there have taken place many illegal wearing of crowns in, for instance Oshun Division, llesha Division and in other little known villages of the coastal district. At llesha I gather that it has caused some bad blood.

You will agree with me, gentlemen that it is a serious lapse in our custom and tradition for a chief to dare to put on his head a beaded crown to which he has not succeeded! What glory, what honour is there in a crown which one’s father never wore, never bequeathed!! Those who persist in wearing beaded crown unlawfully may one day be called upon to surrender them; I can only advise them to discontinue doing so before they are compelled to abandon them: I also feel to warn those who are just thinking of wearing crown illegally to try to have some confidence in themselves. They should cease to suffer from inferiority complex. They should try to have the courage to restrain themselves from following the path of perversion – No amount of distortive history can right what is fundamentally wrong. Don’t let us deceive ourselves, it is not the hood that makes the rank: it is not beaded crown that makes an Oba. For instance, you have in the hierarchy of chiefs great rulers such as the Olubadan of Ibadan, the Shohun of Ogbomosho, the Timi of Ede to mention just a few who never wear a beaded crown the fact is that non-wearing of beaded crown by them does not detract a jot from the importance and the dignity attached to their titles and their personalities. 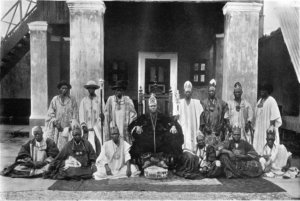 Behold the Timi of Ede any day in his Akoro headgear which is the proper thing for him to wear and you find a dignified ruler who is very confident of himself and his ancient title: the same ‘holds good for the Shohun of Ogbomosho who has never bothered himself about the beaded crown which his village heads have made so cheap. And what of the Olubadan of Ibadan, head of more than three quarter of a million people; his dignity, indeed his greatness lies in his simplicity. A word is enough for the wise.”

My dear Oni, this stand you took in 1959 is still today as valid as it was then. In fact, it is more valid because of the present chaos associated with spurious wearing of beaded crowns by unqualified chiefs.

I have just laid my hands on the ‘Divisional Officers’ Returns on the wearing of beaded crowns by the traditionally entitled Obas in Oyo State’ Ref. No. CB. 201. On page 2 of the document No. 6 under Oshun South Division, there are six names of traditional rulers forwarded for consideration for beaded crowns. And apart from Oluwo of Iwo and Olowu of Owu who are I regarded as historically and traditionally possessing beaded crowns, all other rulers from that I division are regarded as Bales, including the Akire of Ikire. To have donated a beaded crown to a chief under Akire, no doubt, is bound to complicate this matter now and in the future. Please let me know the traditional importance of the beaded crown given to Sooko of Itakun in Ikire.

THE ALAAFIN OF OYO.

The Alafin of Oyo,

“My dear Alafin of Oyo,

I must say that this is no less a news to me than it is to you although I was aware that at the request of the Sooko of Itakun, Ikire concerned, a number of Sookos from lle-lfe went to Itakun to rejoice with him on the occasion of his installation merely as a Sooko.

A Sooko is a member of royal family in lle-lfe and being a member does not, by custom and tradition, entitle him to wear a crown, beaded or otherwise. There are a good number of Sookos in Ife Division. None wears a crown. Traditional ceremonies at installation of a Sooko consist merely of a white cloth in form of sash being wound round the head and not of wearing of a crown.”

I said that the issue is a news to me as it is a surprise because it only came to my knowledge through the press publication you referred to in your letter. I made up my mind at once to call and am calling the Sookos in Ife for explanation, and severe reprimand by me for allowing themselves to be associated with an occasion of an illegal wearing of a beaded crown by the above named Sooko.

Finally, I wish to refer to my speech made at the conference of Obas and Chiefs in Ibadan in 1959 which you have quoted profusely and to restate and assure you that I still stand not only by it but also by any other statements I might have made publicly at any subsequent meetings of the above conference or Council on the vexed issue of illegal wearing of beaded crown by Chiefs traditionally not entitled to do so.

NB: As a result of Oba Adeyemi’s letter, Oba Aderemi stopped the Sooko of Itakun from wearing the beaded crown.

How Ooni of Ife Oba (Sir) Adesoji Aderemi (I) Stopped The Sooko of Itakun From Wearing A Beaded Crown a.k.a Adenla In 1976 After Aláàfin Of Ọyọ Ọba Làmídì Adéyẹmí (III) Fired Him A Powerful Letter was last modified: May 17th, 2017 by Reporter