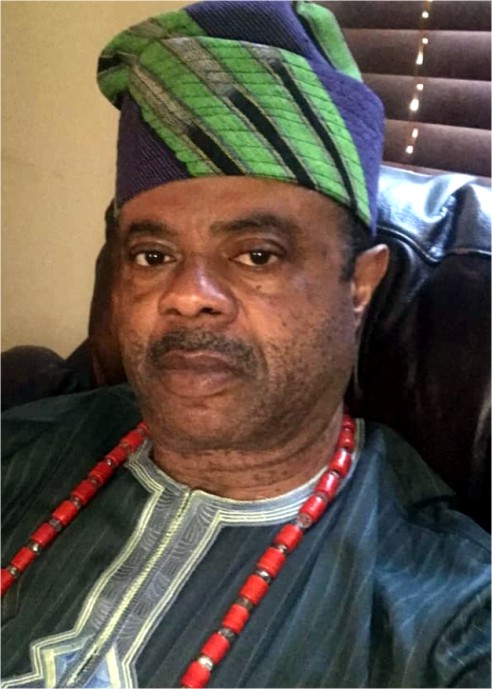 History is about to be made in Ile-Ife, Osun State as Prince Olalekan Fasesin, Oba-elect from Obalejugbe Royal House of Ita Agbon in Ile- Ife, Osun State will be installed the first Oriade town’s King. This Osun-born, but London-based pilot and care provider was elected king in May, 2017, as the Aladeokin of Oriade Town, but before then the late monarch, Oba Okunade Sijuwade, had approached him to be the king of Elekolo community. Aside from his dialect, he fluently speaks German language. Last week, City People’s, Adeola Shittu spoke with the Oba-elect as he divulged his plan for his town among other issues. Enjoy!

Congratulations on your forthcoming coronation as the first Oba Oriade community. Who is Prince Olalekan Fasesin,  Oba-elect?

I’m from the family of Obalejugbe Royal House of Ita-Agbon in Ile-Ife in Osun State. I am a care provider and a trained and licensed pilot, who resides in Britain. I had my primary and secondary education at Ila Oragun before I came to Ile-Ife where I did my ‘A’-levels at then Oyo State College of Arts and Science (OSCAS) after which I travelled to Britain to study Computer Science at the Hasting School of Management Studies in Clapham Common, London. I later went to Germany and learnt Metal Fabrication in Daimler-Benz in Bremen.

How did you feel when you were approached to become the king?

I felt happy and highly honoured. Though, this was not the first time I am being offered the Kingship position by my people. The offer came even during the reign of our late Kabieyesi, Oba Okunade Sijuwade, who joined his ancestors in 2016.  The late monarch approached me and said he wanted me to be the king of Elekolo community.  I saw the offer as an opportunity for me to contribute my quota to the development of my community. Coincidentally Oba Okunade Sijuwade joined his ancestors and that led to the delay. All I know is that man proposes, but God disposes, and I know that there is time for everything and when the time came, Oba Adeyeye Ogunwusi was installed the Oonirisa and Paramount Ruler of Ile ife Kingdom, who also consented to my being installed  the Aladeokin of Oriade Town. As someone who believes that God wants to use me as an instrument of effecting positive development in the lives of the indigenes and the community as a whole and whose priority is to improves life, I accepted the offer with joy and I have since pledged my support to see that Oriade community becomes a place of pride. It will interest you to know that for donkey years my community had been administered by village head (Alaga) who had given according to the best of their ability.

Now, history was re-written in 2017 when I was elected as the first king of Oriade, I felt so happy and honoured for that opportunity and I believe with the support of God Almighty, our Kabiyesi Oonirisa, Oba Adeyeye Enitan Ogunwusi, Ojaja 2, the Paramount Ruler of Ile-Ife Kingdom and with my people and friends support, my reign will witness rapid development in the town.

You were chosen in 2017 as the Oba-elect, but you are yet to be given staff of office, why did you wait till now?

I am a man who believes so much in God’s grace and I know that God’s time is the best. This is the time God wants me to be officially installed. Until recently, the current administration led by Governor Oyetola held meeting with us, I was not in the country then but thanks to technology, I joined them through conference  phoning and he gave his words that he was ready to perform my coronation whenever I am ready and back home. I thank Kabieyesi Oba Ogunwusi Adeyeye for his support, prayer and affection towards me all this while.  Please be informed that I am not the only Oba-elect who will be crowned the king on the day, we are going to be many that day. The state government will also be on ground to present staffs of office to all the Obas that day, and you know without staff of office our rulership will not be in the government gazette. So, these are some of the things that caused the delay, but with the recent development, in a couple of weeks, it will happen.

How soon will it be?

I want to believe it will be very soon. Though I might not be able to give you a date now, but after our meeting with Kabiyesi, Oba Ogunwusi, we will communicate the date to the media but all I know is that it is going to happen very soon.

As the first king of Oriade, how ready are you for the task ahead?

Hmmmmm! If I am not ready, I won’t accept the offer, I am very prepared even though it is a rural and agrarian settings, but Oriade will be transformed  to a town.  They have to live with the fact that they now have a king and not a Baale, I foresee a very challenging task ahead of me, but owning to my passion and determination to contribute my quota to my community, I will say I’m very ready to serve my people and I believe with their cooperation, in a space of time, the communities will be turned into a town with the support of God and my team of friends both home and aboard. I will say I’m ready for the task ahead of me.

How prepared are you for the challenges?

Life itself is very challenging and no good thing comes cheap and whatever will be good will always start on a rough note. Like I said, the task ahead of me is very challenging. I will be making a lot of sacrifice in the interest of my people and the community at large. We will need to educate our people on the importance of the changes that will take place. We need to open up our roads for investors to come and many other things and all this will not come cheap, but notwithstanding, I have constituted a committee that will seek the interest of the community and at the same time prepare for the challenges ahead. I will not be facing the challenges alone, rather I would do so with my committee of friends like the Yoruba will say, eni yan laso mi, we are ready.

What is your relationship with the late Ooni of Ife, Oba Okunade Sijuwade?

The late monarch was someone I regarded as my mentor and my role model and I cherished him so much. He was based abroad before he was invited to become the Ooni and he reigned for over 30 years. I learnt a lot from him. During his lifetime we had this father-and son-relationship and he would remain my mentor.

How do you intend to balance your role as Kabiyesi with your business and your social life?

My mentor and role model was in business before he was asked to ascend the throne of his forefathers and while he was the Kabiyesi, his  business was flourishing and in my case, it won’t be different. I have capable hands who will do that for me. On the issue of social life, at my age, is there anything new again and I have this belief that age determines what kind of life you want to live, because the way I am today is not how I will be tomorrow and I won’t be in the same place tomorrow, the situation and the level would determine what is going to happen there and who says I can’t create that fun I need at Oriade town, so let’s leave that level till then.

For the benefit of our readers, can you put us through the history of Oriade town? Is it in the with Oriade local government area?

Many people don’t know that we have two Oriade communities in Osun State. The popular Oriade is the Oriade local government area, but my own Oriade community is under Ile-Ife or better says one of the reserved areas that make up Ile-Ife kingdom. Let it be known that Ife owns two-third of the biggest forest reserves in the South-West of Nigeria. According to history, it was said that during the olden days, Ife accommodated many foreigners, who came to reside in Ife.  To avoid clashes with other guests in their land, the Ife people allow them to go cultivate and live in their farmlands, far away from their town. The migrants, of course, paid levies on the farm proceeds to Ile-Ife.

Many believe that your relationship with the current Ooni of Ife, Oba Adeyeye Ogunwusi, gave you the opportunity to become a king?

(Laughs….) You see, different people with different impressions, I’m just hearing this for the first time and as I said earlier, I am from a royal family and if not for the demise of Oba Sijuwade, I would have been a crowned king long ago. I believe God’s time is the best. So, if Kabiyesi Adeyeye now finds, me worthy and he feels I should become an Oba in his territory because he believes or trusts I could develop the community to a standard, because Ife as a whole needs developments, then he cannot be wrong in that regard. Kabiyesi Adeyeye Ogunwusi is a dynamic father to all and he believes in human capital and infrastructural development. Kabieyesi  takes all of us as his children and he encourages you once he realises you have progressive ideas and good sense of patriotism. He believes he can’t do it alone. He needs capable hands and people who could key-in to his vision to develop the communities, and he has people like me and others as Obas, so with this, my submission to your guess is as good as mine as to the aim of Kabieyesi Ooni Adeyeye’s dream of transforming Ile-Ife to a tourist center and why should I not identify with his sterling qualities and impactful vision.

On a finally note, what are some of your plans for the good people of Oriade?

Since I was elected 2 years ago, I have been meeting with people, contacting expatriates and have also met with some investors who are ready to invest in the community. Like I said, it’s a reserved area and the community is being dominated mostly by farmers, so I am in talks with the United Nations (UN one of its projects have to do with rural development and as soon as we have their reply, we will kick start the project. Also in the area of agricultural preservation, I am in talks with the IITA, so that they can come in and show our farmers how to maximize their benefits from such expert advice. We are ready to key into their programmes for the development of our community. I’m in talks with my friends both home and aboard to come and invest there. I am ready to open up the Oriade community to investors. The movement has started and there is no going back.