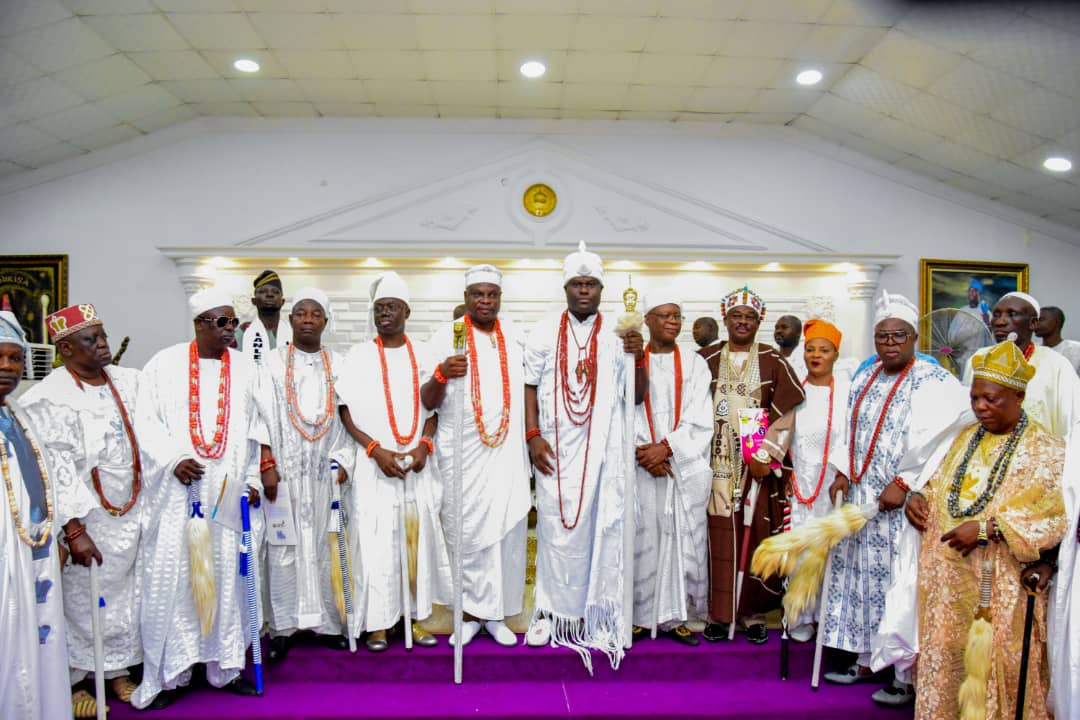 The Arole Oduduwa & Ooni of Ife, Ooni Adeyeye Enitan Ogunwusi Ojaja II, on Saturday re-echoed the need for descendants of Oduduwa, Yoruba in particular to be united as members of one big family from the same source in Ile-Ife.

Ooni Ogunwusi made the call at his Ile Oodua Palace, Ile-Ife, while playing host to indigenes of Otun-Ekiti and descendants of Olofin Ogunfunminire, who visited Ile-Ife to reunite with their root.

While establishing that all towns and settlements across Yorubaland have their roots in Ife, Ooni Ogunwusi noted that objective research has equally revealed that the Yoruba people of South-West Nigeria have the oldest DNA, which is about 120,000 years.

“There is nothing like Yoruba in Ifa corpus, it is like an alias given to us. We are all from Ile-Ife, we are ara’fe. Scientifically it has been proven that only the Yorubas that have the ghost DNA which gave the emergence to the likes of the sickle cell over 90 per cent of sickle cell history and genealogy is within us and our forbearance call them Abiku. The spirit and reincarnation of ghost spirit. You can hardly find that in the world.

“At some point, we once lived together as one big happy family and the likes of Oore of Otun played a pivotal role as the spokesperson of Oduduwa, our progenitor, the thinking and thinktank. We started the Parliamentary system.

“The meaning of Ajero is the Parliamentary structure where you debate so this formed part of the things we are re-establishing today. We are reestablishing everything in Yoruba land today like the kingship system and the dynasty of Oyo, Benin, Ila and others.

“Ila championed the Igbomina people being headed by Ifagbamila one of the sons of Oduduwa.” The Ooni explained.

While addressing newsmen, the Oore of Otun-Ekiti and Paramount Ruler of the Moba people in Ekiti, Lagos and Kwara states, Oba Adekunle Adeagbo, who led hundreds of his subjects to Ile-Ife, described the event as a historic homecoming for sons and daughters of Otun-Ekiti and other Moba towns across Yorubaland. He added that it was equally done to celebrate the ongoing five-year coronation anniversary of the Ooni of Ife who he is the overall head of the Oodua race worldwide.

“Historically like you have heard from our father, Ooni himself, we migrated from Ile-Ife to our current locations in Ekiti, Kwara and Lagos states. We decided to visit our home, Ile-Ife again to pay homage to my father the Ooni and reconnect with our ancestors.

“This is my first homecoming as the Oore of Otun-Ekiti and it won’t be the last. The Ooni is a father to all of us in Yoruba land and we shall continue to rally round him. I am so happy and the only thing I can say is that I thank God almighty.” Oba Adekunle said.

Similarly, the Olota of Ota, Lagos State, Oba Abdul-Ganiyy Obalenge and other monarchs led several Awori chiefs and indigenes to Ife, during which the Ooni launched the Olofin Nations Assembly, to unite all Awori indigenes, who are descendants of Olofin Ogunfunminire.

READ ALSO: HELP! MY GUYS THING IS TOO BIG FOR ME!

Help! My Guys Thing Is Too Big For Me!