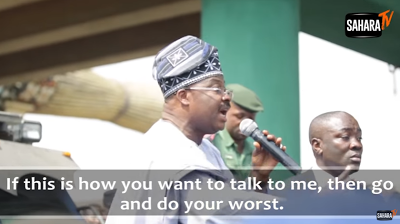 The recent protest staged by the students of Ladoke Akintola University of Technology, Ogbomosho has generated enough social media buzz. Not that it’s new to witness such between students and constituted authorities. But the twist is in the way the protest was handled and the resultant effects on average Nigerians.

LAUTECH is jointly owned by Osun and Oyo states despite being situated in Ogbomosho, Oyo state. In recent times, there have been myriad of problems bedevilling the institution and there is no sign of possible solutions in no distant time. For the past eight months, the students of the institution have remained at home. They decided to approach one of the constituted authorities whose governmental ineptitudes have made the students remained at home. Probably the other constituted authority was beyond their reach. He should be probably busy with his ‘Opon Imon’ somewhere in Oshogbo.

The agitation was mild except for the raucous shouts of No, no, No…… The students themselves lacked some spiritual growth in the fine art of Aluta. Some of them should have gone to Obafemi Awolowo University for just one year tutorials. I recommend Awo hostel for the guys and probably Moremi hostel for the ladies. During Aluta, there is no gentle man or woman. It’s a struggle against oppression. It’s a wake up call to the constituted authorities that things are unbearable and an immediate remedy is not negotiable. That’s the essence of Aluta. The constituted authorities should have known better.

Governor Abiola Ajimobi was tactless. He spoke like a typical ‘omo eleran’ born and brought up in Iwo Road. For the first time, I am wrong that Yoruba leaders are highly cerebral. Ranging from his grammatical infelicities to his body language, you will be shocked and ashamed to be called a Yoruba man for the first time. Even Baba Adedibu, ‘orisa Molete’ would have done better if he were to be alive. At a time, the governor couldn’t find a reason for the insult of protesting before his excellency. He was shocked to see them agitate instead of begging as usual. A constituted authority? The students must be crazy. They probably didn’t know they were in the office of the executive governor of Oyo state and not a local government chairman.

“What course are you doing? Are you saying that to me? Se student ni iwo yi? Beeni, iwo. Bring the boy for me. OK, if this is how you are going to answer me, I am not gonna talk to you. elo se ife inu yin. This government will not tolerate nonsense from anybody. Your management, government and other governments lack fund. Se emi lo ti school yin ni”

He simply failed where he ought to have succeeded in explaining issues to the students. Honestly, the body language of Ajimobi suggested that he has been the Lord of lords in Oyo state. He hated the guts of the students because he has never been challenged in that manner all his life.

Let’s go back to the throes of an average student of Ladoke Akintola University of Technology. The students are wasting away at home while their peers are busy pursuing their careers in other schools. Does Ajimobi know the economic, social, academic and financial implications of this strike at all? If he didn’t close down the school as he has claimed, who did? My father? Both the students and their poor parents who cannot afford the luxury of private schools are losing out badly. No thanks to his executive rascality and dereliction of duties. There are many Ajimobis in the corridors of power in Nigeria. They see us as pawns. They expect us to beg even when they fail. What saddens me most is not the tactlessness of Ajimobi but an attempt to rationalize what the governor has done by some overzealous aides. May they receive senses.