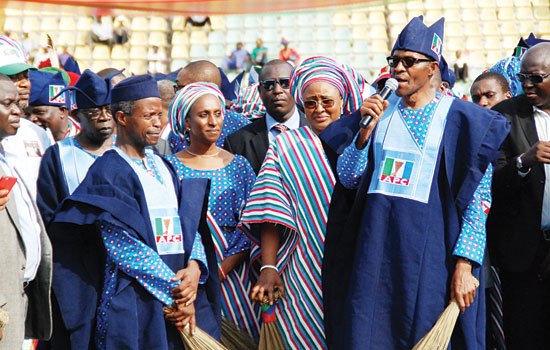 In a bid to ensure hos return to office for a second term, President Muhammadu Buhari on Friday arrived in Katsina, heading to Daura, his hometown, to participate in the rescheduled presidential and National Assembly elections holding on Saturday.

The presidential aircraft conveying the President, his wife, Aisha, and some of his aides landed at Umar Musa Yar’Adua International Airport, Katsina, about 3.25p.m.

Buhari was received at the airport by Governor Aminu Masari of Katsina State, the Minister of State for Aviation, Senator Hadi Sirika, members of the National Assembly from Katsina State, heads of Federal Government agencies in the state and other government functionaries.

The President left the airport in a presidential helicopter for Daura at about 3.50p.m.

While in Daura, Buhari, the presidential candidate of the All Progressives Congress in Saturday’s elections, is expected to join other eligible voters at Kofar Baru 003 polling unit, Sarkin Yara Ward, Daura, Katsina State, to cast his vote.

Buhari, on February 14, rounded off his nationwide campaign in Katsina and later proceeded to Daura for the February 16 presidential and National Assembly elections before it was shifted by the Independent National Electoral Commission to February 23.

The governorship, House of Assembly, and Federal Capital Territory Area Council elections were also shifted from March 2 to March 9.