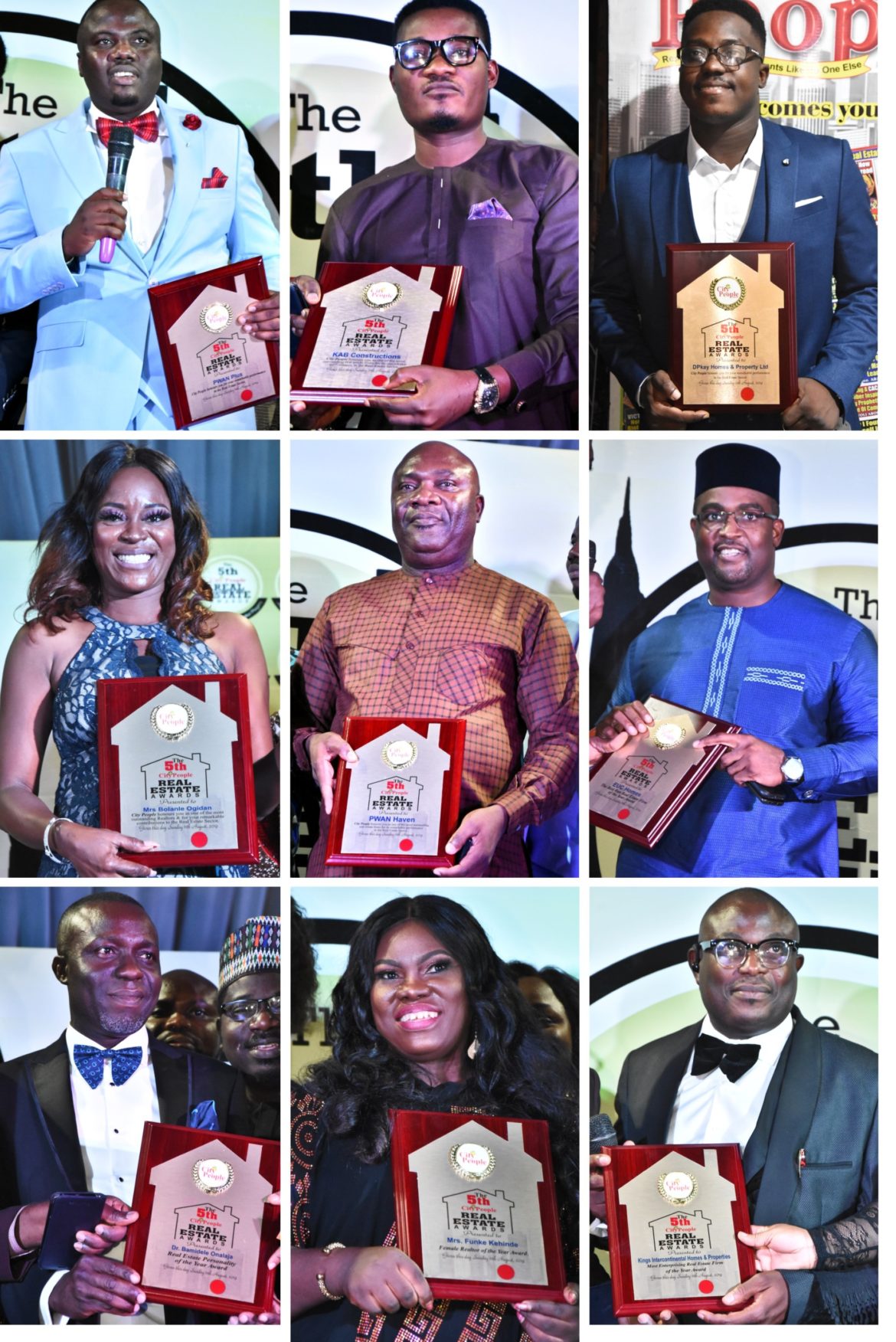 Sunday 11th, August 2019 was the day City People set aside to celebrate top real estate players across the country. This year’s event was colourful, and it will remain indelible in the mind of every participant. The event took place at the spacious TimeSquare Event Center in Ikeja, Lagos. Below are top real estate firms and individuals who emerged winners at the 5th edition City People Real Estate Award.

One of the real estate firms that won big when City People held its 5th real estate awards was Kings Intercontinental Homes & properties.

The Managing Director, Aare Adeleke Adebesin has done wonder by creating an Application for the company, that will help resolve various challenges from their new and old subscribers.

The company was honoured as the Most enterprising Real Estate Firm of the Year.

Prince Kazeem Eletu-Odibo is the face of Osapa London, a community in Eti-Osa in Lekki, Lagos opposite Jakande Housing Estate. He is one of the prominent sons of late Chief Bamidele Eletu Odibo

In the last few years, he has transformed Osapa to a new London.  He has spent over 600 Million on road constructions and drainages.  Prince Kazeem Eletu-Odibo was able to invest heavily on the needed facilities and infrastructure.  Today, Osapa London is known as small London.  He has also brought the community on to global recognition.  He has been able to transform the community from Osapa Village to Osapa London.

He was honoured For His Outstanding CSR Projects In The Lekki Axis. The awards was received by Mrs Bolanle, who is Prince Kazeem PA.

Presently, the company is handling a very big project around  Ikota in Lekki axis, Lagos; a project that will change the face of the area.

City People honoured KAB Constructions as one of the best companies for his outstanding performance in the real estate sector.

He is one of the biggest real estate players in Lagos. He is popularly called double MD because he sits on the board of all the affiliate companies in the PWAN Group, and recently launched PWAN Legend.

He has a very wide experience in real estate ranging from prospective, acquisition, sales, and real estate consulting/management which spans over 10 years. He has attended real estate training and seminars both in Nigeria and abroad.

Mrs Funke Kehinde is one of the big players in her sector.  She moved into real estate 5 years ago after working for over 10 years as a Facility Manager.  Passion and drive for clients’ satisfaction led her to float Brilliant Concepts, to cater to the real estate needs of her numerous clientele who want to be a landlord.

In the last few years, she has won several awards from top real estate companies who she sells for.

She was the cynosure of all eyes, as she dazzled in a black gown. She was showed love by the presence of REMS (Real Estate Millionaires)

She was honoured for her outstanding performance in the real estate sector, as the Best Realtor of the Year.

EUC Homes is one of Nigeria’s indigenous real estate development and investment companies.  The EUC Homes is currently the biggest landowner in Ibeju Lekki axis.

The MD of the company, Chief Ben Odunzeh has a cordial relationship with the Obas in the whole axis.  A few days ago, he was conferred with a Chieftaincy title (Babalaje of Ibeju-land), by Oba of Ibejuland, Oba Rafiu Olusegun.   Since the company began operations a few years ago, EUC Homes has been well managed to favour its subscribers, home and abroad.

This year, City People honoured the company with the award of the Best Run Real Estate Firm of the Year.

Coveland Limited is a new real estate firm of about a year old.  The company is positioned to support government efforts in bridging the housing deficit.  In the last one year, the company through the MD of the company, Ms Tolulope Ige, has made many Lagosians become Landlord. City People honoured the company as Real Estate Revelation of the Year.

Mrs Bamidele Elizabeth is an outstanding property player.  She is a woman who has distinguished herself in a male-dominated sector.  She is the CEO of a luxury property company, Godmade Homes.

She set up Godmade Homes after many years as a Civil Servant.  The company plays big in the highbrow areas in Lagos. The company has a lot of multi-million projects on-going

Mrs Bamidele was an early comer.  She dazzled in a very lovely white gown

She was honoured for her remarkable contributions in real estate. She won the Best Female Luxury Development Company of the Year.

The beautiful woman was honoured by City People as an Outstanding Female Property Player of the Year.

PWAN Premium is another subsidiary of PWAN Group.  The firm is co-run by an amiable couple, Dr Dennis Oberabor as MD and his lovely wife, Vera Oberabor, who is the Executive Director of the company.  This is one of the subsidiaries of PWAN Homes.

The company, PWAN Premium was honoured for is remarkable performance in the real estate sector.

Mrs Bolanle Ogidan is one of the top realtors in Lagos.  She is the MD of MCdedict Homes Limited.  She has sold over 50 plots in the last few years. Currently, she is one of the big fishes in her category. she was honoured as one of the Most Outstanding Realtors of the year award.

Dr Augustine is the Chairman of PWAN Homes, while Mrs Jayne Onwumere is the Group Managing Director of the company.  The company is run by this amiable couple.

Over the last few years, this company has created many subsidiaries and it is still waxing stronger. The company was floated by Mrs Jayne Onwumere to solve housing challenges in Lagos, while the husband is the Chairman of the company.

The two couple were honoured by City People as the Most Outstanding Real Estate Couple of the Year.

PWAN Group is one the leading real estate firms in Nigeria.  It was set up many years ago by a visionary woman, Mrs Jayne Onwumere.  Presently, it has over 12 subsidiaries that are also doing well as companies.

PWAN Group is a property marketing and information company, located in Lekki axis.  In Lagos today, you can hardly hear people mentioning top property firm without the name PWAN Homes. The company, PWAN Group was honoured as the Most Impactful Real Estate Firm of the Year.

Mr Debo Adejana is the MD of a popular real estate firm, Realty Point Limited.  He is known for his popular slogan, Sack your Landlord.  He is one of the most active real estate players in Lagos who mentored and offer advice to those who have an interest in real estate

He was being honoured for his remarkable contributions to the real estate sector.

PWAN Haven is also a subsidiary of PWAN Group.  The MD of the company is Dr. Frederick Efeoghene Okpaje.  PWAN Haven is just 2 years old company, but is has provided housing to many Lagosians. One of the core values of the firm has been their integrity.  City People honoured the company as one of the most outstanding real estate firms for its remarkable performance.

DPkay Homes & Property is one of the few real estate firms that is playing big in the Lekki-Ajah axis of Lagos.  They have up to 8 estates in Lekki axis alone.

The MD of the company is Prince Dele Akinola.  This man has done enough to ensure all the properties of the company are free from government acquisition and Omo Onile trouble. It is for this, City People honours your company fir its remarkable performance in the real estate sector.

This real estate firm is a subsidiary of PWAN Group, headed by an energetic young woman, Mrs Obianuju Chinwura, the Managing Director of this promising real estate firm.  In the last few years of operation, PWAN Prime has done well in providing safe and secured landed properties for its subscribers.

And, one of the things that has helped the company today is because of the creativity and ideas of this man, Aare Adetola EmmanuelKing. City People honoured him as the Most Creative Real Estate CEO of the Year.

Mrs Bamidele Elizabeth is an outstanding property player.  She is a woman who has distinguished herself in a male-dominated sector.  She is the CEO of a luxury property company, Godmade Homes.

She set up Godmade Homes after many years as a Civil Servant.  The company plays big in the highbrow areas in Lagos. The company just launched another mouth-watering project at the Parkview Estate, in Ikoyi, called Elizabeth Court Grace.

She won the  Best Female Luxury Development Company of the Year.

Dr Bamdele Onalaja is the MD/CEO of the reputable property company called RevolutionPlus Property.  In the last few years, he has done laudable projects in the real estate sector.  He also launched his foundation, Chris Bamidele Onalaja Foundation (CBOF) a few months back to provide for the needy in the society.  He, through his company also signed a lucrative deal with Lagos State to promote Sports.  He has spent millions of Naira doing various things that can help develop society and real estate projects.

He emerged the Real Estate Personality of the Year.

He is one of the most accomplished young men in the Real Estate sector.  He is the MD/CEO of Landwey Investments which has built several estates in the Lekki/Ajah axis.

He’s one of the most active real estate players in Lagos. He emerged The Youngest Real Estate Player of the Year.

Olori Aderonke EmmanuelKing is the wife of Adron Homes boss, Aare Adetola Emmanuel-King.  But this pretty woman is not only a wife, but she is also an asset.  She has remained the brainbox in the expansion of Adron Homes & Properties beyond the shores of Africa.  Her creative ability reflects in the ever-fresh ideas she injects into the business as seen in Adron Home’s various promos, customer appreciation and other creative ideas the company comes up with.  She has an eye for details.  She is also very, very good with figures.  All of these have helped Adron Homes become the big brand it is today.

She was honoured with the Most Enterprising Real Estate Woman of the Year.

Dr Kennedy Okonkwo, a real estate guru, who has done well to be awarded the Doyen of Real Estate at 2019 City People Real Estate awards.

BOD Properties won one of the best awards; it got a recognition award for it positive role in the sector. Also won big are: Femi Ayinuola & Company Limited, Builder Kunle Awobodu, the new President of The Nigerian Institute of Building won big. Builder (Mrs.) Modupe Ogunbanjo also was honoured. Chariot Group, owned by 2 hardworking brothers, Otunba Muyiwa Akinbolagbe and Akinlolu Akinbolagbe, was honoured.