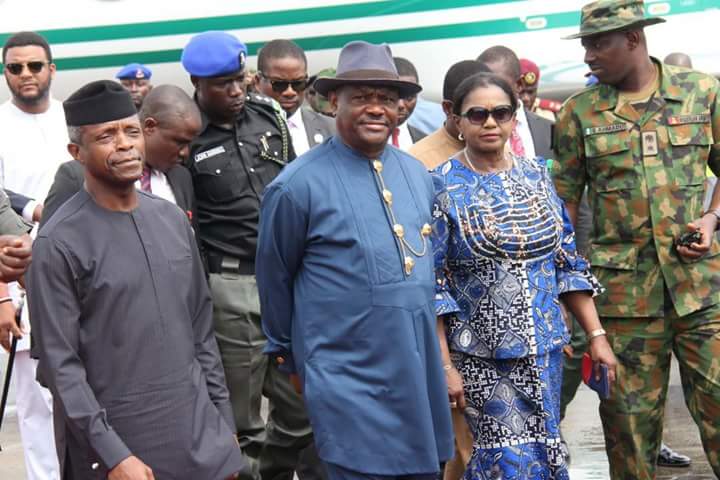 Members of All Progressives Congress (APC) in Rivers state on Monday laid down their swords and pledged support for the success of Governor Nyesom Wike-led government.

Led by Senator Andrew Uchendu (Rivers East), the members under the aegis of “Elected and appointed members of the APC” told reporters in Port Harcourt, the state capital that the war of attrition was over.

At the press conference was the State Secretary of APC, Charles Bekee and spokesman, Chris Fynbone among other party chieftains.

Uchendu expressed willingness of the opposition party to accept Wike’s call for peaceful coexistence of all political parties.

He said this call was in tandem with Minister of Transportation, Rotimi Amaechi’s appeal in his Easter goodwill message.

The senator announced an end to all forms of hate speeches in the state, saying “it is time for governance.”

“We want to allow Governor Wike to discharge his constitutional responsibilities, primary roles of the government are provided in the constitution of the Federal Republic of Nigeria to provide security for lives and property in the state, no other person takes that responsibility l, and we are saying, we will join in that boat but only one captain will be piloting the boat and that captain is Gov. Wike, we will only help him to take the boat to the shore

“When two captains are in one boat, there will be no headway. His clarion call we hope is one that should signal the end of politicking and the beginning of governance.

“It is our considered opinion that Rivers people must now become the centre of all politics and governance.

“We cannot continue to toy with the lives of our people or take them for granted any longer.

“A key indicator of good governance is the return of peace and security in the State.

On what should be the focus of Wike, Uchendus said: “Revitalization of the C4i Security architecture of the previous administration is necessary in fighting these criminal elements.

“Rehabilitation of sons and daughters roaming the streets of foreign lands because of the cancellation or stoppage of their scholarship awards.

“Completion of some of the laudable pro-people projects embarked upon by the administration of the Rt. Hon. Chibuike Rotimi Amaechi. These done, we can expect to begin to see some changes.