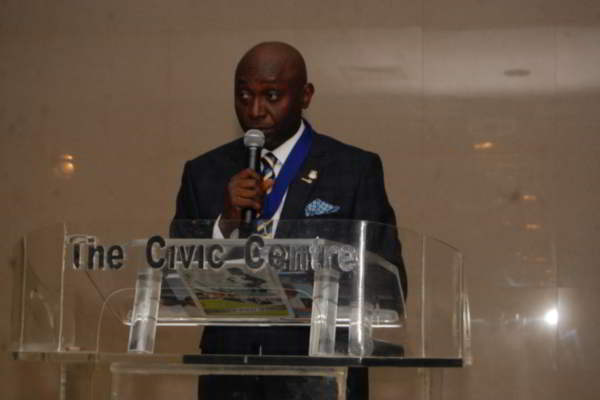 Wednesday, 12th July, 2017 was a special day for the Lagos branch of Nigerian Institution of Estate Surveyors and Valuers, as it officially installed the 25th Chairman and the Executive Committee of the NIESV which is now referred to as ‘The Very Branch’.

ESV Olurogba Orimalade is the new Chairman. The handling over ceremony was at Civic Centre, Victoria Island, Lagos, and it was well attended by captains of industry and creme de la creme in the Nigeria Real Estate sector and the inauguration was tagged “The Investiture of Our Branch Chairman and The Executive Committee members”

ABOUT THE NEW CHAIRMAN

ESV Olurogba Orimalade is a graduate of University of Lagos and an alumnus of the Lagos Business School. He is a fellow of both the Nigerian Institutions of Estate Surveyors and Valuers (NIESV) and the Royal Institution of Chartered Surveyors (RICS). ESV Olurogba has worked in manycompanies, such as: Messrs, Adegbemile Akinlosotu & co (formerly Fox & co), Intercontinental Properties Limited and Rogba Orimalade & co, where he is presently the Principal Partner.

ABOUT THE LADY OF THE DAY

The chairlady at the event was Professor (Mrs) Mobodupe Moronke Omirin a Professor of Estate Management. The woman has a first class  degree in Estate Management, making her the first female Nigerian to attain the honour in the field. She urged the new executives to be more vibrant in delivering their core duties. She also charged the Nigeria Institution of Estate Surveyors and Valuers to be good example wherever they found themselves, especially in the built environment.

ABOUT SPECIAL GUEST OF HONOUR

The special guest of honour of the event was Chief Jonathan Adio Obafemi Olopade (OFR). He is the President of Metropolitan Club, Lagos. He not only came, he also delivered a powerful speech. This man of substance would be 91 years in few days time. In his speech, he charged Estate Surveyors and Valuers to be more active, that they are losing their grounds to Lawyers. He stressed that, there was no time he heard an Estate Surveyor went to court to defend their clients. He also said, the profession is highly regarded in England and that should be the case in Nigeria and said the profession should not be relegated to the background. He wondered how and why a Surveyor would recruit Lawyer to work for them, he said it negates their profession. Chief Jonathan concluded his speech by charging the new excos to always learn from those who have acquired knowledge over the time.

ESV Olurogba Orimalade is the new Chairman of the Lagos branch of Nigerian Institutions of Estate Surveyors and Valuers, while ESV Dotun Bamigbola is the Vice Chairman.

In his speech, he commended the effort of Lagos state government with the current advancement in the state’s information technology and development strides in urban renewal and infrastructure. He stressed that, his area of concentration can be classified into 5 key areas; Branding; strategic engagement (public and private sector); public enlightenment; membership expansion.

Also at the event, the immediate past Chairman, ESV Offiong Samuel Ukpong. He praised  ESV Olurogba Orimalade for the support he got while he was the Chairman.

Why Constructing Road With Cement Is Better...