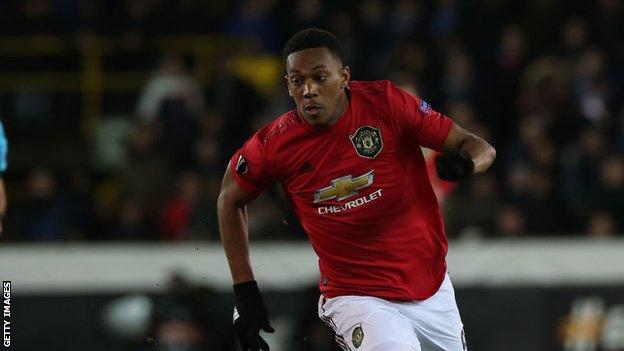 Manchester United manager Ole Gunnar Solskjaer felt his side were “a bit sloppy” as they drew 1-1 with Club Bruges in the first leg of their Europa League last-32 tie in Belgium.

The visitors started poorly and fell behind when Emmanuel Dennis lobbed Sergio Romero early in the first half.

“I don’t think it was one of the best games anyone’s seen,” Solskjaer said.

“It was a difficult game against a well-organised team in difficult conditions.

“We got an away goal, we got a draw. We go home next week so hopefully we can finish the job.”

The game was played in heavy rain and strong wind for large periods, while Solskjaer also felt the ball that is used in Europa League games did not help improve the quality of football on display.

“I think you can ask any of the players, that ball doesn’t help anyone play football,” he added.

“It’s just different and difficult to play with. You can get one and try!

“But it’s the same for the two teams, of course. But the conditions weren’t nice, the wind and the rain.”

The two sides will meet again at Old Trafford on 27 February.

After back-to-back Premier League defeats in January, Manchester United have enjoyed an upturn in form in recent weeks with three wins and a draw in their four games before the trip to Belgium.

An impressive 2-0 win at Chelsea on Monday gave United the ideal platform to build on but six changes to that side threatened to disrupt any momentum they were building and so it proved as the visitors put in a disjointed and uninspiring performance for large periods of this game.

United’s three-man defence – particularly in the opening half-hour – looked fragile and exposed and Ole Gunnar Solskjaer’s side failed to heed an early warning when Nigerian striker Dennis got in on the right before Victor Lindelof scrambled away.

Consequently, they were punished after 15 minutes when Mignolet launched a pass down the pitch and Dennis got in between two defenders before coolly lifting the ball over the onrushing Romero.

From then on Bruges looked certain to add to their lead as United struggled to settle but a mistake at the back was clinically pounced on by Martial as he ran on to a poor throw-in, outpaced a defender before beating Mignolet at his near post.

Martial has often struggled to live up to the high expectations placed upon him when United paid £36m to sign the forward from Monaco in 2015, making him the most expensive teenager in world football.

However, he was the standout United player in this game and was unlucky not to add a second when Mignolet pushed his shot onto the post just before half-time.

Martial has now scored in back-to-back games and, with 14 goals to his name already, he is on course to surpass his previous best tally for a season – the 17 he scored in his debut campaign for United in 2015-16.

Another positive to come from the game was the late cameo from Bruno Fernandes. The Portugal midfielder – signed from Sporting Lisbon in January – was introduced with nine minutes to go but his desire to get the ball and his positive, forward-thinking was yet another indication that he can become a key player for United in the coming seasons.