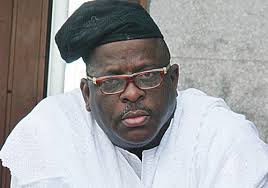 •What No One Will Tell You He Did On His Sick Bed!

Not many people know that late Senator Buruji Kashamu who died a few days ago, spent his last days making up with a lot of people he had issues with in his life time. That is the big news coming out of the household of the late Ijebu-Igbo politician. And we can categorically confirm that on his sick bed, towards his last days, he called up very many people, one by one, to apologise and beg for forgiveness. He sought for forgiveness from his known and acclaimed enemies.

He also spent his last days to arrange adequately for his children. He settled as many of them as possible, insiders reveal.

City People gathered that he knew he was going to die. Insiders say he had a premonition of his death and he specifically told many of those he spoke to that he had a few days left to spend on earth, though many of them didn’t quite  believe him at first. He specifically gave instructions to his young wife, Susan, Lawyers and Political aides. We gathered that he passed on instructions to his followers in Ogun PDP to align with the OGD Group.

He was also able to make up with some of his female friends towards his last days. There was a big businesswoman friend of his who he had disagreements with a few years back and he suddenly called her up to plead with her. He also made up with 2 former South-West governors. He also had a telephone conversation with an Elderstateman who he had issues with. We even gathered that he withdrew some cases he had filed in court.

How did he know he was going to die to have made him embark on peace moves before his death, many have been asking? Many say it was because he was spiritually gifted. He was a good Muslim who spent a lot on Moslem activities. In his life time, he took care of many Muslim clerics and donated generously to religious leaders. The late Senator Buruji Kashamu was a man of many parts. He was a caring husband, doting father and an exemplary grandfather. He was also a dutiful brother, uncle and leader, who spared no cost in giving hope to all who came across him. He was an entrepreneur and a politician of note.

Early in life, he floated Kasmal Group of Companies, an indigenous conglomerate with interests in the real estate business, hospitality, Oil and Gas, automobile, investment and entertainment industry. He was also the Chairman of the Group Kasmal SAL and SICB Industries in the Republic of Benin.

On the political front, he was a foremost leader and major financier of the PDP in Ogun State until he went the way of all mortals on the 9th of August, 2020. He once served as the Chairman, Organisation and mobilisation Committee of the PDP in the South West zone of Nigeria, comprising the six states of Ogun, Lagos, Oyo, Osun, Ondo and Ekiti.

The late Senator Kashamu meant different things to different people. Some described him as a controversial person. But, those who knew and came across him during his lifetime would really attest to his generous and down-to-earth nature. He gave freely and unconditionally. That was why they called him Alaanu Mekunu. He was genial and yet firm; he was very courageous, yet kind and tender-hearted. He was a fighter for Justice and gave all he had to any cause that he believed in. Although, he was wealthy, he never forgot his roots. That, perhaps, explained his uncommon ability to connect with the grassroots.

Born on the 19th of May, 1958, the late Senator Kashamu had his primary education at the Ansar Ud Deen Primary School, Oke-Sopen, Ijebu Igbo, Ogun State. After his primary education, he moved to Lagos where he worked and attended evening classses. He later sat for the West African Examination Council’s GCE as an external candidate. Realising his flair for business early in life, the late Senator Kashamu attended Pitman College in the United Kingdom where he took business courses to prepare himself for the enormous task of business management. He later enrolled for an Executive Diploma in English Language of the University of Lagos, Akoka, Yaba, where he bagged a Diploma in English.

He had over 90 per cent of the shares in the ultra-modern cotton ginnery in the Republic of Benin, a neighbouring french-speaking West African country; while the balance is held by some private banks and individuals. The late Senator Kashamu was involved in the business of importation and exportation of goods and commodities for over 25 years. For him, the saying that the height great men reached and kept was not attained by a sudden flight, but was attained, while their companions slept, they were toiling in the night, could not be truer. He maintained such a high energy level and tight schedule that saw him stay awake till late in the night. He would call up his business and political associates at anytime so much that you wonder if he ever slept! He was a workaholic with an unbelievable level of energy.

As has been attested to by many across the length and breadth of Ogun State and beyond, that the late Senator Kashamu was a philanthropist of note. It could be safely said that his philanthropic gestures smoothened his foray into politics. Indeed, giving was his second nature. He once said he could not stop giving because the Almighty Allah kept blessing him as he gave to people of all races, creed and status. In 2009, he founded the Omoilu Foundation, a non-profit organisation, to empower the people. Consistent with his belief that government alone cannot meet the needs of the people, the late Senator Kashamu used the Foundation to reach out to thousands of people within Ogun East Senatorial District, Ogun State and beyond.

The foundation embarked on various initiatives such as granting of interest-free micro-credit schemes, scholarship, payment for surgeries and hospital bills, and several other empowerment schemes. Not many gave him a chance when he happened on the political scene in Ogun State. They asked how old he was in politics; what he knew about politics and where he was coming from. When all those could not do, his detractors launched a campaign of calumny to cast aspersion on his person. They sought to haunt him with some of the trials he had in his eventful life. This was inspite of his exoneration by the courts.  But the late Senator Kashamu remained undeterred. and the rest, as they say, is history.

Imbued with an uncommon native intelligence and a sharp memory, the late Senator Kashamu has his own unique approach to party politics and organisation. Although, he was quick to say he was not your regular politician but a businessman in politics, the late Senator Kashamu believed that the welfare of the people was the whole essence of not just govenment, but party politics. A clear-headed and highly calculating individual, Senator Kashamu’s foray into politics began in 2008 when the former Otunba State Governor, His Excellency, Governor Gbenga Daniel and other chieftains of the PDP in Ogun State invited him to help mediate in the intra-party crisis that nearly crippled the government and party in the state.

He soon established a platform then known as “OGD OMO ILU” through which he sought to rally all the various contending interests. His intention was to get everybody to support the then Governor Gbenga Daniel-led government. To calm  frayed nerves, he helped many to set up their businesses; others, he gave vehicles and cash. The foundation soon metamorphosed into what many called the “Omoilu Movement” as it spread across the 20 local government areas in the state. Again, on realising that no nation or people can be greater than the level of its human resource, the late Senator Kashamu also made education one of the cordinal objectives of the Omoilu foundation. Now, besides empowering people from all walks of life with hundreds of units of vehicles and motorcycles, a good number of indigent youths are on the foundation’s scholarship in various private and public institutions across the country and beyond.

The late Senator Kashamu showed that one did not need to hold public office before one could make an impact on the welfare of his people. Indeed, analysts said that his foray into the politics of Ogun, nay the Southwest, raised the bar of party politics in the state and zone. This was attributed to the uncommon passion and generosity that he brought to bear on his political sojourn.

During the 2015 general elections, he contested to represent Ogun East Senatorial District in the Senate on the platform of the PDP and won, defeating his closest rival with over 15,000 votes. Thus, he became the highest elected official of the PDP in Ogun State being the only PDP Senator from the state and one of the five PDP Senators from the South West geo-political zone.

As a grassroots politician, who was always interacting with his constituents, he attracted many laudable projects to Ogun East Senatorial District. The projects cut across the educational sector, healthcare, rural electrification and the provision of potable water to communities. He also facilitated the distribution of various mobility aids, equipment and tools to his constituents. In the educational sector, the late Senator Kashamu facilitated the building of 19 schools and the rehabilitation of three others, with, at least two in each of the nine local government areas that make-up Ogun East Senatorial District.

During the 2019 general elections, he contested to be the governor of Ogun State on the platform of the PDP, having emerged PDP’s governorship candidate. Quite unlike the typical Nigerian politician, when he lost the election, he was the first candidate in that election to concede defeat and congratulated the winner-the incumbent Governor of Ogun State, His Excellency, Prince Dapo Abiodun (MFR). he did not stop there. He visited the Governor at his Iperu country home to congratulate him.

With these and several other initiatives too numerous to capture in a single piece, the late Senator Kashamu showed that he was a rare breed, a consummate entrepreneur and an uncommon political leader for whom politics was not a do-or-die affair. Indeed, his ears and heartbeat resonated with the people, especially the masses. He lives for the people. Little wonder, he was aptly described as “Alaanu Mekunu” (a Yoruba expression for “the helper of the masses”).

A detribalised Nigerian who spoke French, English and Yoruba fluently, the late Senator Kashamu was an employer of labour, a manager of men and resources with an uncanny ability to seamlessly multitask and coordinate activities.

Until he breathed his last on the 8th of August, 2020, during a brief illness, the late Senator Kashamu was a devout Muslim who had an unwavering belief in the Almighty Allah. He demonstrated that in politics, as in life, it is the impact that you make on the sands of time that counts, not the years. That is why he would continue to live in the hearts of the many men, women, youths and children whom he loved and touched their lives in several ways than one, while he sojourned on this terrestrial plane.