How TUFACE & I Set Up RUMOURS 6 Years Ago Breakfast With Niteclub Guru, DOTUN OMOTOYE 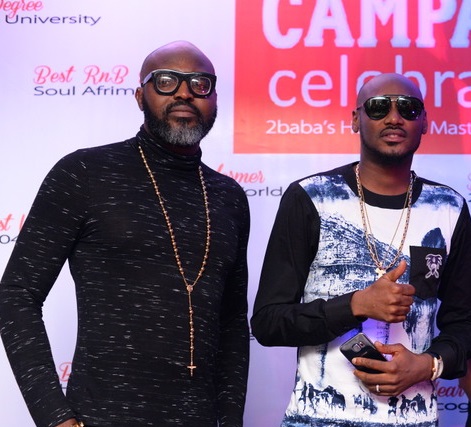 When you mention the name Dotun Omotoye, only a few would know who you that is but the name Dotun Rumors would sure ring a bell to a lot of Lagosians. This popular night owl who loves to party in his own club runs the prestigious Rumors night club with his friend and business partner, Innocent Idibia popularly called 2Baba. Unknown to many, Dotun’s nightlife has been part of him since he was a teenager and this is why he finds himself in the night business. Dotun hosted City People’s publisher, SEYE KEHINDE, Society Editor, TAYO FAJORIN-OYEDIJI and Showbiz Reporter, DANIJI EMMANUEL in his house where he revealed the inspiring story of how he got into the business over two decades ago, how he met Tuface Idibia 6 years ago and the journey of the clubs he had ran before Rumors.  Enjoy the interview.

How have you been able to cope with the such of job you do?

As a matter of fact, it is no longer a job, it’s a lifestyle. I find myself living on the opposite side of what people do on the ordinary. My job entails me living like a nocturnal being. Exist only at night, sleep during daytime.

How many years have you been in this business?

As far as I am concerned, I have been doing this for 25 years.

How did it all start for you?

In the course of growing up, from my high school I went to a boarding house. I went to Federal Government College, Sokoto. I was one of the types you would call back in the days the waywards of the school. One way or the other, we found ourselves breaking fence, which was what we used to call it back then. Normally, on the weekends, you are not supposed to be out of school but one way or the other, we would sneak out of school and go party, hangout and the likes. So the partying thing was something I set myself into since I was a teenager and one way or the other I have invested a lot in night life, so it was more like a call for me. At the end of the day I had no choice than to follow the path of what I have become

Was music your initial attraction at the start?

No, my initial attraction was partying, I just loved to party, I loved music. As a child from a Christian family, my father was the type that would not spare any of his children from been engaged with church activities. I was in the choir, so anything that had to do with music sort of absorb me. It wasn’t the singing aspect of it; it was melodious aspect of it.

Tell us about yourself before Rumors

Dotun before Rumors… Let me put it this way, there was a place in GRA called Newyorkers. Before I left the country in the 90s I used to hangout in Newyorkers. When I returned to the country, I found myself been attracted to the same spot. Newyorkers was the thing everybody talked about back then. I came back and noticed that Newyorkers had lost its steam. The owner of Newyorkers is my friend; we had a sit down and agreed that I take over the running. That was how I transformed it to Manhattan and later Lacachette. The need to evolve and do something different came on me and I went into partnership with another friend and we started the project, The Place together. After the place, Lacachette wasn’t doing so well and I found myself going back to Lacachette to see how I could turn it around. That I did with a very good friend, Innocent Idibia. The brand Rumors belong to Tuface and I. From the way it is, we have established a few outlets here and there and the only thing I can see happening to Rumors is a spread.

How does Rumors compare to other clubs?

Well, for Rumors, It’s a premium lounge; it’s not a regular club. It is a place you come into to build contact. We are not very particular about what you have to spend, though that is important, the whole idea is to create an atmosphere where people could come into and meet like minds in a party atmosphere.

Whats the next project for you?

Your relationship with Tuface Idibia.

Tuface is a very good friend. There are very few men like Tuface Idibia. I knew him first as a customer back when I was doing the Lacachette project. He used to come around as a customer. Tuface is one person that did not see himself as people saw him. He was very peaceful and easy going. One day, I sat with him after we had built a strong relationship and I advised him to invest his money in the nightclub business. I told him if he was open to it we could go into partnership. Somehow the whole idea got to him and that’s how we started till this day.

How long ago was this?

The first Rumors started 6 years ago.

Nightlife, how do you handle it?

Literally speaking, it’s my life but the content doesn’t belong to me anymore. I live practically for people. Rumors as it were is supposed to be a place where you come, hangout, do your thing, be happy and leave but when people come to Rumors and ask of me and I am not around, it becomes sort of flat. Recently we opened Rumors VI and I found myself been torn between Ikeja and VI. Most people identify me with Rumors Ikeja. Rumors Festac is been handled by Tufac Idibia’s younger brother, Charles Idibia. Been a region where Tuface grew up, his brand has been able to hold Rumors Festac. Rumors VI needed me to push it when we opened it, and Ikeja started to miss me when I went to VI. My point is, the culture of the business is something that I put a lot of my personality into. A lot of the customers relate with you like they are co-owners. When people come around, they see the place like its our home and once I am not around, they turn back.

How do you balance work and family?

I am a family man, I am married with 4 children. My family does not stay in Nigeria. Once a while after a long work, I take a vacation to be with my family and sometimes when I am working, after work, I sleep.

How do you balance working at night with your life?

I found a way to balance it as a business and at the same time as an entertaining venture. It is not like Banking where you walk into it and everything has to be strictly professional, No, you have to have a way to bend your rules.

What type of person is Dotun?

Dotun is an easy going person. He is the kind of person that just wants to be happy. I have come a long way in life; I have invested a lot of time and money in nightlife. I know how much I have spent as a teenager on nightlife. I am just grateful to God that all I have sown in nightlife I have been able to get back.

How difficult is it balancing the nightlife with your family abroad?

Your wife’s brand, why did you pull back on it?

Her brand honestly I want to see grow. She is a woman with a lot of talent but family comes first. The children’s demands and upkeep does not give her the time to do anything. When you have 4 children with you in a place like London, you sure would be so tied to family. It would become practically impossible for you to do anything else. Her talent is not buried and one way or the other she would still do a comeback, maybe not commercially but she loves to sing and she sure has a lot to offer.

I grew up in a very tough part of Lagos. I am a proud son of Agege. Growing up in Agege, if you can grow up in Agege then there is no other place on God’s green earth that you won’t be able to survive. Agege is made up of a lot of parts, the violence part is there, the street part is there, so I grew up with a whole lot of school of thoughts. Let me put it that way.

How TUFACE & I Set Up RUMOURS 6 Years Ago Breakfast With Niteclub Guru, DOTUN OMOTOYE was last modified: July 25th, 2017 by City People

Naked Man Cuts Off His Own Penis in Broad Daylight, Runs Through the Streets Covered in Blood