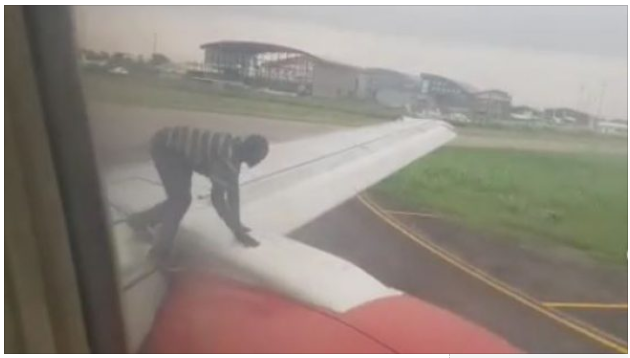 Passenger on board a Port Harcourt bound plane panicked on Friday after an unidentified man prevented the aircraft from leaving Murtala Muhammed Airport in Lagos.

According to Otto Orondaam, founder of Slum2School Africa, the man ran from the bush towards the plane that was taxing on the runway ahead of take off.

The pilot, who reportedly sighted the man, was said to have slowed down the aircraft belonging to Azman Air, after which the man climbed the engines and dropped his bags inside.

The man was reported to have taken hostage of the plane for over 30 minutes after which security officials of the Federal Airport Authority of Nigeria (FAAN) apprehended and whisked him away.

“For 30 minutes we have been stuck at the runway at MMIA by an unidentified man who ran to the aircraft with a bag. Security has not showed up and everyone is panicking,” Orondaam said.

“The guy approached the plane with gloves and started walking around and under the aircraft holding a bag which he dropped inside the engine.

“Thanks to the Pilot of the Azman Airline for quickly observing and taking swift action. He has finally been apprehended and we’ve all disembarked from the flight. FAAN authorities showed up 23 minutes into the scene but were scared to approach him. Security eventually shows up after 37 mins.”

When newsmen contacted Henrietta Yakubu, FAAN spokesperson, she said a statement will be issued on the incident.