US drone back on Earth after two years in space 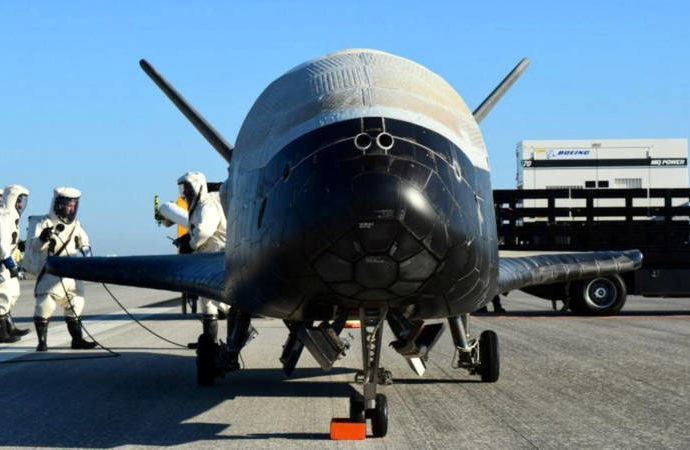 After a nearly two-year sojourn in space, the US military drone X-37 B is back on Earth, fueling wild ideas about its mystery mission.

Looking like a small version of an old NASA space shuttle, the craft touched down Sunday in Florida, ending a 718-day voyage around the Earth, the US Air Force announced.

Just under 30 feet (9.1 meters) long and with a nearly 15-foot wingspan, the X-37 B was blasted into low Earth orbit atop a rocket.

Since its first flight in 2010, it has sparked all kinds of speculation about its real purpose.

Some think it might be a space-based bomber that could strike objectives on Earth at a moment’s notice.

Others suspect it is a potential “killer satellite,” capable of destroying or damaging enemy satellites.

Or perhaps it is a super spy plane, orbiting Earth to keep watch on enemy territory as needed.

Fears that the world is on the brink of an arms race in space is behind some of those theories.

Satellites are crucial to the functioning of national economies as well as military operations, and the United States, China and Russia are all thinking about ways to defend them against attack.

No doubt they are also looking at ways to attack their adversaries’ satellites.

In 2015, the mysterious behavior of a Russian satellite fueled speculation that Moscow was developing attack satellites capable of maneuvering in space to zero in on other satellites.

But many experts doubt that the X-37 B is the prototype for a true weapon of war or espionage.

“The X-37 is the size of a pick-up truck — it would be difficult to have an effective weapon on board,” says Victoria Samson, an expert with the Secure World Foundation, an advocate of sustainable development in space.

Moreover, the X-37 B would not be very maneuverable once in space, because its only source of power are solar panels.

“Generally speaking, to maneuver up in orbit requires a tremendous amount of fuel. So I can’t imagine that they would be doing a lot of maneuvering,” Samson said.

Mark Gubrud, a physicist and expert on military space technologies at the University of North Carolina, says the idea that it is a maneuverable spy satellite doesn’t make much sense either.

“It has very little maneuver capability in orbit, and it can’t reach high altitudes, only low Earth orbit,” he said in an email.

“If you want to make a stealthy, maneuvering satellite, you will not weigh it down with wings and landing gear and make it so visible from Earth that even amateurs are able to track it.”

The X-37 B’s fourth flight was spotted six days after its launch in 2015 by a network of amateur satellite trackers, according to the website Spaceflight101.com.

It disappeared for several months in 2015 following a change in orbit, and again in February 2017 after another maneuver, but was later found again, the website said.

In reality, experts today think the X-37 is more likely a test bed rather than a potential weapon, just as the Air Force said it was in one of its few public statements about the system.

They think it is being used to test sensors and equipment in space that can then be brought to the ground to see how they have performed.

Rocketdyne, a US company, announced that on the latest flight, it tested an ionic thruster used by satellites to move in space.

“If the US military wanted to quell concerns, they could,” simply by putting out more information about the X-37 B, said Samson.

“Maybe it’s in their interest to keep people guessing.”

US drone back on Earth after two years in space was last modified: May 10th, 2017 by Arinze Ago

First Attempts to Bring People Back From...

The Brain Of Intelligent people Is More...