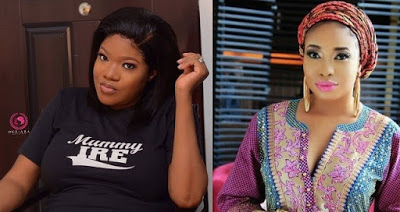 Nollywood actress, Toyin Abraham, has threatened lawsuit against Liz Anjorin, her colleague in the movie industry, over the “defamatory statements” made against her.

The movie star took to her Instagram page on Monday to share a ‘cease and desist’ legal document served on Anjorin.

She also drew her colleague’s attention to the post she shared, where she accused her (Abraham) of sponsoring an article against her (Anjorin).

“We refer particularly to three posts on your Instagram page @LizzyAnjorin and specifically your post of September 14, 2019, which mentioned our client’s being a link to the other two posts. It is our understanding from the combined reading of your three Instagram posts that,” the statement read.

“You alleged that security officials at the Saudi airport conducted a search on your person for hard drugs ostensibly acting on a tip-off from our client. The evidence you have against our client is simply because one of her fans with Instagram handle @m_adeoye had a tete-a-tete about you with a blog @gistlover.blog1. You unfathomably assumed the blog belongs to our client, that our client sponsored the article.”

The film star said she was no longer going to speak on the issue or “wrestle with pigs” as her team and attorneys have taken up the case.

“Silence is not golden. Rather than wrestle with a pig, it might be ideal to let the pig know that it belongs in the pen. No longer speaking on this, my management team and attorneys are taking this up,” Abraham wrote in the document’s caption.

In the document, Anjorin was asked to delete all defamatory posts made about Abraham and retract her “unfounded claims” about the actress in a letter of apology — to be published on her Instagram and forwarded to the office of her lawyers within 24 hours.

According to the document, failure to comply would result in a lawsuit which would see the claimant pay the sum of N500 million in damages and publish an official letter of apology on two daily national newspapers.

“Ms. Abraham is a famous actress who has built an enviable reputation based on her hard work and widely recognized talent. Nevertheless, we have been informed that you have been maliciously spreading inaccurate and unfounded information that is damaging to her,” the document read.

The document stated that Anjorin’s publication has “caused serious and irreparable injury to our client’s reputation in the estimation of right-thinking people.”

“This letter serves as a final warning and a pre-suit notice to the effect that, should you refuse to comply within 24 hours of the receipt of this letter, you shall leave us with no choice than to commence legal action against you for the damages of 500 million and the publication of an apology in two national daily newspapers as well as criminal proceedings without further recourse to you.”