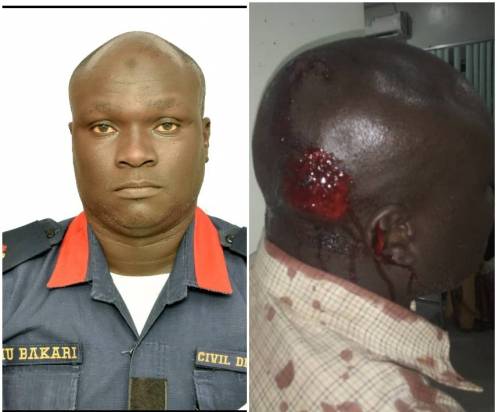 Son of the Shehu of Borno, Kashim Abubakar-Elkanemi, has been filmed in a video driving at top speed as knocking down an official of the Nigerian Security and Civil Defence Corps in Maiduguri, Borno State.

The incident occurred on November 16 at the Ramat Square Maiduguri when some children of Borno prominent personalities pulled a street racing stunt with dozens of expensive cars under a group known as “Yarwa Squad”.

Eyewitnesses confirmed that the ‘power-drunken children’ were angered when Bakari cautioned them against holding car racing on the main road.

As a result, Shehu’s son and one other driver drove at Bakari with the intention of killing him, according to those present at the scene.

“The officer was crushed by the Shehu’s son for asking them to stop the race in order to prevent an accident.

“Bakari came to beg us to stop the stunts but some youths started insulting him and calling him names.

“Some of the youths were saying that Maiduguri belongs to them and they had the right to do whatever they wanted.

“In fact, some of them were saying ‘who are you (NSCDC officer) to stop the son of the Shehu from doing whatever he wants. This is his father’s land.’

“While the argument was going on, two vehicles sped towards the officer in an attempt to hit him, but the officer narrowly escaped.

“However, the Shehu’s son made another turn with the vehicle and knocked down the security officer,” an eye witness told PRNigeria.

The officer, as seen in the video, was left on the ground with injuries.

WATCH As Shehu Of Borno’s Son Knocked Down NSCDC Officer With Car was last modified: November 19th, 2019 by Damilare Salami