Home News Why OSUN Governor Is At War With Predecessor
News 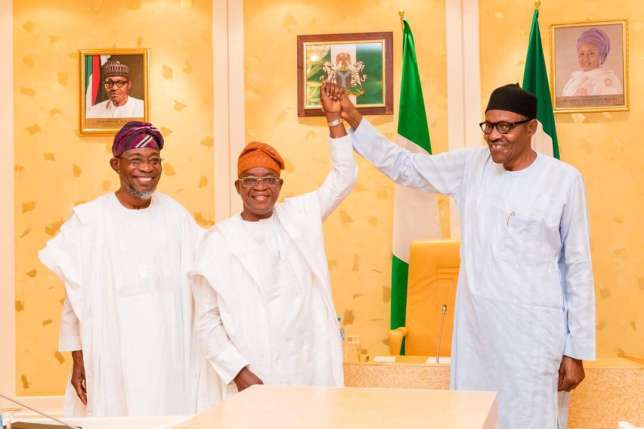 •Details Of The Fight Between Gov. OYETOLA & AREGBESOLA Revealed

For months now, there has been palpable tension all over Osun State over the ongoing cold war between Governor Gboyega Oyetola and his predecessor Ogbeni Rauf Aregbesola. The story has been all over town that all has not been well between the 2 gentlemen. As the story goes, the 2 have been barely tolerating themselves since Oyetola took over. Oyetola we hear is not too happy with some of the last-minute appointments that Aregbesola made towards his last days. He also does not like the overbearing influence of certain members of Aregbesola’s Oranmiyan political family.

So bad did the situation get that a few days back, Aregbesola, who is now the Minister of Interior had to openly dismissed insinuations that he was at war with his successor, Adegboyega Oyetola.

Aregbesola spoke in Osogbo during his recognition as the Amirul Waziril-Muminina by the Chief Imam of Osogbo, Sheik Musa Animasahun, at the Osogbo Central Mosque.

Oyetola and many members of his cabinet were conspicuously absent at the ceremony.

There have also been insinuations that Oranmiyan, the political group of the ex-Governor, was not being given recognition in the present administration. But Aregbesola, who spoke in Yoruba language while addressing the gathering, explained that Oyetola’s inability to attend the event was due to his trip to Saudi Arabia for Ummrah.

He said his relationship with Oyetola remains very healthy.

He added that the renovation of the Osoabo Central Mosque was funded by the Osun State Government with inputs of the present governor, who was then the Chief of Staff to the Governor.

So bad did the fight get that Governor Gboyega Oyetola and his predecessor, last Thursday, both visited Chief Bisi Akande, a former Governor of the state and Interim National Chairman of the ruling All Progressives Congress (APC).

The meeting between the trio lasted for over 4 and a half hours where they discussed state matters.

In a post by Ismail Omipidan, the Chief Press Secretary to the Governor “To celebrate the New Year, Mr. Adegboyega Oyetola, Governor, The State of Osun, and his predecessor and Minister of Interior, Ogbeni Rauf Aregbesola, were at Ila, the country home of a foremost Political leader, Chief Bisi Akande, yesterday”.

After the merriment, the trio spent quality time, 4 and half hours to be precise, discussing state matters. Osun TI N DARA O”.

For some time now, the duo of Akande and Asiwaju Bola Tinubu, the national leader of the APC have been working to resolve the political differences between Oyetola and Aregbesola which has led to a confrontation between their supporters.

What Aregbesola said at the turbaning revealed a lot more.

Aregbesola, who spoke in Yoruba language after he was turbaned by the Chief Imam of Osogbo,  Sheik Musa Animasahun that Friday said his relationship with his predecessor was cordial and had spoken before the event. He revealed that the Osogbo Central Mosque was not renovated with his money but that of the state government which also has the approval of the present governor, who was the then Chief of Staff during his administration.

“The whole of my cabinet contributed to the successful renovation of the mosque because we took the decision collectively. I am inaugurating this mosque in the name of the incumbent Governor, Alhaja Isiaka Adegboyega Oyetola because his not being here was unavoidable as a result of his journey to Mecca for the Umrah and we must all understand that I have no disagreement with him. We have talked today and he has contributed to the success of this programme”, he said.

Earlier in his lecture, Professor Afeez Oladosu of the Department of Islamic Studies, University of Ibadan, admonished the Minister not to relent in extending mercy to the downtrodden as a way of reciprocating the blessings of God in his life. He advised the

Minister of Interior of the consequences of becoming too powerful and secluded from the populace, urging ‘him not to relent in helping the less privileged in the society.

Oyetola was said to have ignored his predecessor, Rauf Aregbesola’s son, Kabiru Aregbesola and Tunde Rahman, an aide of APC National Chairman, Asiwaju Bola Ahmed Tinubu from occupying the enviable position of Chief of Staff, as presented to him by his political godfathers.

To the chagrin of many, Oyetola, announced his preferred candidates against those forwarded to him by his principals.

The statement made available to the media by Adeniyi Adesina, the Chief Press Secretary to the governor, revealed Diji Akintola as the governor’s choice for the plum position, while Prince Oluwole Oyebamiji and Adeyanju Abdulahi Binuyo were appointed as Secretary to the Osun State Government and Deputy Chief of Staff respectively.

The appointment according to informed sources signaled the beginning of a cold war between Oyetola and his predecessor, Aregbesola who would have preferred Kabiru, to be the new Governor’s Chief of Staff.

Recall that Gboyega Oyetola was Aregbesola’s Chief of Staff during his 2-term as Osun State Governor.

It took Governor Oyetola close to 4 months to select members of his cabinet, causing tension in his camp. However, he resolved the situation by appointing his preferred candidates, therefore dousing these tensions in the interest of the party and the state.

Why OSUN Governor Is At War With Predecessor was last modified: January 6th, 2020 by City People

How My Role As Miss PEPEYE Gave Me My BIG Break – Fast Rising Actress, YETUNDE BARNABAS