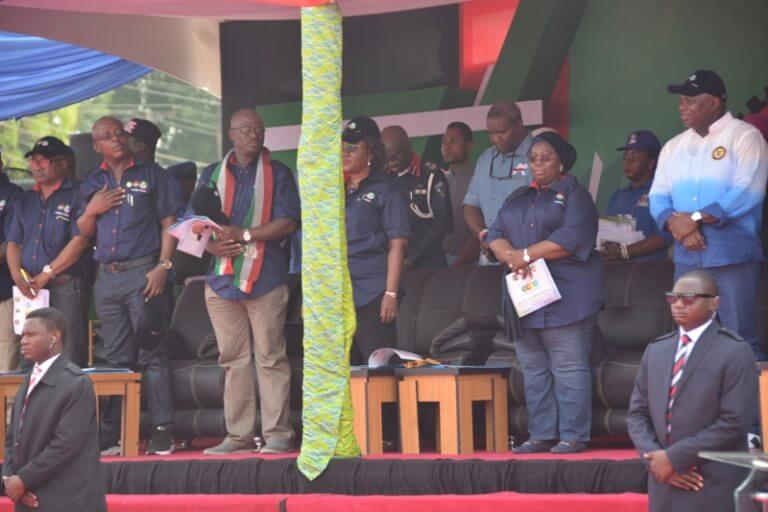 Lagos State Governor, Akinwunmi Ambode on Tuesday charged the Organised Labour to be realistic and reasonable in their agitations and struggle for better wages.

The governor spoke at this year’s May Day celebration held at the Agege Stadium, Agege area of Lagos, Southwest Nigeria.

According to Ambode, “There will always be is a place for agitations and struggle and it is a fact that only those who dare struggle may win. Yet, these agitations and struggles must be focused on realistic and reasonable goals that are pursued in the appreciation of the competing interests that government has to continually balance.”

He said his administration had continued to partner with the leaders of the Trade Union Congress (TUC) and the Nigeria Labour Congress (NLC) and would continue to consider all the requests of labour as “we work together for the peace, progress and prosperity of all workers in Lagos State, all Lagosians and our State.”

Ambode urged the organised labour to continue to show understanding while rightly insisting on the due and just entitlements of their members, just as he called on all the stakeholders in the management of the nation’s economy to redouble their efforts and continue to explore innovative means of addressing the economic challenges in order to make life easier and more comfortable for the Nigerian workers who were the development and growth partners of the government.

On the theme of this year Workers’ Day celebration, “Labour Movement in National Development: Dare to Struggle, Dare to Win,” the governor said it was not only apt but also timely.

Workers’ Day: Ambode Urges Labour Unions To Be Realistic In Agitation was last modified: May 1st, 2018 by Damilare Salami