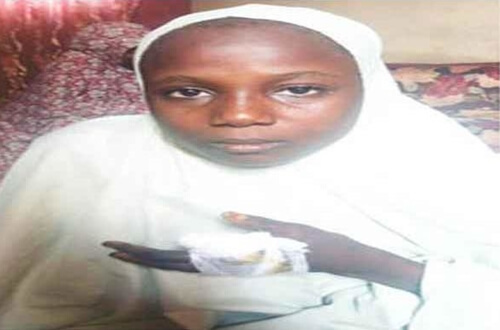 According to a report by DailyTrust, a Junior Secondary School III student, Safiya Abbas Ahmed, has had her finger amputated after applying lizard droppings to a festering knife cut wound on it.
A source in the school who said the Education Ministry has already waded into the matter, said Safiya was allegedly advised to apply lizard faeces and beans by a matron as local treatment in the absence of prescription drugs.
15-year-old Safiya,  a student of Government Girls Junior Science Secondary School, Miga, Jigawa State, was unable to sleep owing to the pain from the wound but she could not be taken to the school authority for immediate medical attention as the principal was said to have warned the staff against taking any student’s complaint to her after school hours.
Disturbed by her condition, as she sobbed all through the night, the matron in her dormitory introduced her to the lizard faeces concoction as so-called traditional medicine. This, however further worsened the girl’s condition as her forefinger became swollen.
Despite her deteriorating condition, two days after, Safiya could not get any medical attention because the school had no clinic, and the principal was said to have left for the weekend in Kano.
Realizing there was no help at sight, the source said, Safiya pleaded with one of her teachers to call her father to come and pick her from the school for medical attention.
“Safiya could not even attend the school’s morning assembly on Monday but stayed back in one of the classrooms crying in pain. Her cry fortunately drew the attention of the principal and that was when she realized the gravity of the girl’s situation. The school called the girl’s father and the authority released her to him,” said the source.
Malam Abbas Ahmed took Safiya to the General Hospital in Jahun where it was diagnosed that infection from the first aid earlier applied had ovewhelmed ed the finger.
Seeking for further diagnosis, the worried father decided to try elsewhere and took his daughter to Rasheed Sekoni Specialist Hospital, Dutse, but the result came out same: that the finger be amputated.
Narrating how it all started, Safiya said on the fateful day, she had observed a voluntary fast and that in the process of cutting onions to prepare a salad dish, she sustained a knife cut on her left index finger. She reckoned that the cut was not so serious.
But later in the night, she started experiencing pain from the wound and that the matron allegedly told her she could apply lizard faeces and beans as medicine which she did.
According to her, she sustained the injury on Thursday night but that a purported warning by the principal that nobody takes any student’s complaint to her while at home stopped Safiya from making her condition known to the school authority until the following day, Friday.
The pain was gradually increasing but after seeing the principal the following morning, she reportedly told the girl that there was no treatment for the cut in the school but gave her office keys to the school health prefect to get some pain relievers for her. Thereafter the principal was said to have left for Kano for the weekend.
She could not sleep on Friday night due to severe pains. In the morning, she pleaded with a teacher to telephone her father and tell him her condition.
She said her father said he would be on his way to pick her up but she told him she would not be released as the principal was away. He went to the school on Monday.
“On Monday morning, the principal observed the wound and said she did not know that it was that bad. She asked me if she should call my father, I told her we have already spoken and he was on his way to pick me.
“As I could not stop crying, she had to come and see me again immediately after the morning assembly.
“When my father finally picked me from the school we did not stop anywhere but the General Hospital in Jahun. The health workers queried why we did not seek medical attention on time. At a point they said they cannot handle the case.
“My father took me to a private clinic in Dutse, where we were first told that the finger was damaged and the only option is to amputate it. He took me back to Rasheed Shekoni Specialist Hospital, Dutse, where the amputation took place because they had made the same recommendation earlier.”
Speaking, the mother, Sadiya Sale Yusuf, said “When we took her to hospital we were told that the problem was as a result of infection and if the finger was not removed it will affect the rest of the hand.”
She said they have reported the matter to the State Universal Basic Education Board (SUBEB), which oversees junior secondary schools in the state, where they were told the case would be taken to the state Ministry of Education for necessary action. “But since then we have not heard from the ministry again,” she added.
“We will not relent over the matter until justice is done to our daughter. If you look at what happened there was some act of negligence which we cannot condone,” she said.
When contacted, the state Commissioner for Education, Rabi Ishaq, said the ministry had already set up a committee to investigate the matter and report back for necessary action.
“We have constituted a committee to investigate on whether there was negligence on the part of the principal or any other official from the school,” the commissioner said.
Young School Girl Loses Finger After Using Lizard Droppings Concoction in Jigawa was last modified: September 7th, 2017 by Arinze Ago