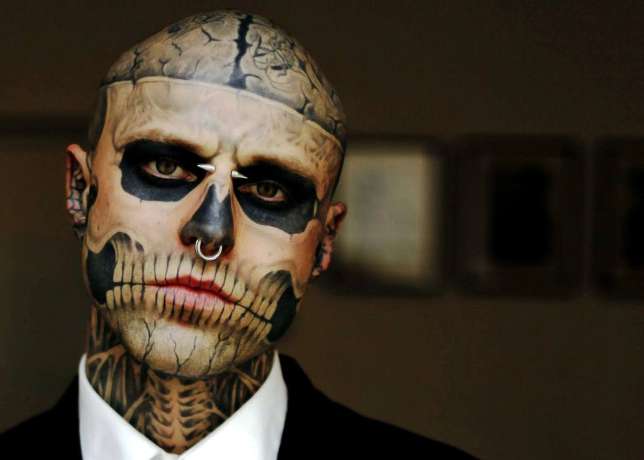 Popular model, Zombie Boy has been found in his Montreal apartment, six days before his 33rd birthday.

Zombie Boy is known for the intricate tattoo designs all over his body. His tattoo skeleton design made him a star in the fashion world.

Although largely, unconfirmed, several media outlets claim it was a suicide, bringing forward the issue of mental health following the death of other public figures; Chester Bennington of Linkin Park, Kate Spade and Anthony Bourdain who also respectively died of suicide.

On August 2, 2018, he posted a cryptic message on Instagram, it was to be his last. It reads, “o Damballalo we howl upon stars hung above we soul cast down the well of stone as fire laid betwixt two fatesof most drear less dire straights each breath cuts ice as flesh is weighed in front of deaths old narrow gates where bold and brazen last rites crate lo heed our wish of madness deep from os our prayers we kissed so stern and cold on metal shells release by moonlight glow — Zombie Boy”

At 15, the model, musician and actor — who appeared in 2013 movie, 47 Ronin starring Keanu Reeves — had been diagnosed with a brain tumor which he survived.

In an interview for The Mirror on October 30, 2016, he told Emma Jones that, “Aged 15, I found out I had a brain tumour. I was told I could die or be left disfigured; I guess this spiralled me into becoming obsessed with the morbid and macabre. As it happened, the operation to remove the tumour went without a hitch, but since then, I’ve known life was too short to not fulfil my dreams of tattoos and body modifications. 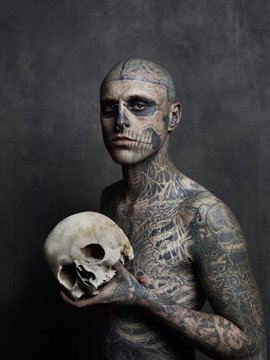 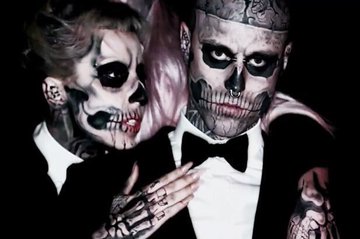 The suicide of friend Rick Genest, Zombie Boy is beyond devastating. We have to work harder to change the culture, bring Mental Health to the forefront and erase the stigma that we can’t talk about it. If you are suffering, call a friend or family today. We must save each other.

Twitter Ads info and privacy
Following the news, Lady Gaga sent out a Twitter post that reads, “The suicide of friend Rick Genest, Zombie Boy is beyond devastating. We have to work harder to change the culture, bring Mental Health to the forefront and erase the stigma that we can’t talk about it. If you are suffering, call a friend or family today. We must save each other.”
Postby

His management also released the following statement, “Rico was loved by all those who had the chance to meet him and know him. We received the unfortunate news at the beginning of the afternoon and members of the team have come to support his family and relatives in this dark and difficult moment. We want to present our deepest condolences… Thank you zb for these beautiful moments in your company and for your radiant smile.”

At the time of his death, the Science Museum, London planned to release an 11.5 foot sculpture of Genest in 2019. It was going to be called “Self-Conscious Gene” and created by Marc Quinn.

playZombie Boy during a photoshoot

Rick Genest was a champion for the misfits and vanguards. He lived his truth and was celebrated for it.

You love only Isabel, you just messing,...