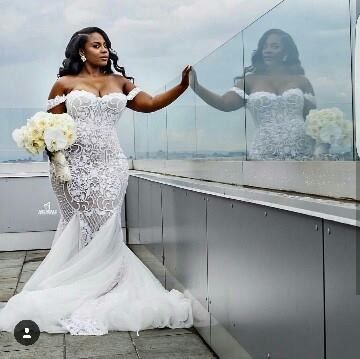 In the recent past, a lot of Nigerian rich kids and celebrity brides took pride in patronizing foreign bridal designers for their wedding gowns. But gradually, a crop of creative and highly skilled Nigerian designers took their craft a notch higher and now favourably compete with the foreign designers, especially in bridal wears. Gone are the days celebrity brides flaunt Vera Wang wedding gowns and the likes as they now go for some top Nigerian/African bridal designers who are making giant strides with their bridal collections. However, these couture wedding gowns don’t come cheap as some of their prices run into millions. City People’s  VIVIAN ONUORAH profiles the 10 leading  designers whose bridal collections are highly patronized by celebrity brides.

Deola Sagoe is a haute couture fashion designer from Ondo State, Nigeria. She studied at the University of Miami and University of Lagos with a Masters in Finance and Management. Sagoe began designing in 1989 and has gained international notoriety for her lively and colourful designs. Sagoe is a renowned designer with a great international repute. She frequently exhibits her couture collection at Cape Town Fashion Week and has been an invited guest of New York Fashion Week in the past. Sagoe has won the “Africa Designs” and the MNET/ Anglo Gold African designs 2000 awards for which she was nominated by Andre Leon Tally, US Vogue editor. She recently designed former Head of State Ibrahim Babangida’s daughter Halima Babangida’s wedding gown.

Lanre Da-Silva Ajayi  is the founder of eponymous design label. In nine years her passion for fashion has gotten stronger making the label a fashion favourite among the media, celebrities and fashion lovers.LDA the brand first arrived in the fashion scene in 2005 with iconic 1940’s couture signature designs – a result of what has evolved into a much more modern and cutting-edge brand and a full-blown fashion house. The brand has showcased locally in Nigeria and internationally. Lanre holds a Bachelor’s degree in Business Administration from Coventry University and a Master’s degree in Finance from University of Leicester. She has clothed many celebrity brides.

Yemi Osunkoya is the award winning designer behind the Kosibah label. Yemi established the Kosibah brand in London in 1991 and named the company in honour of his mother.  The name Cosiba comes from the Republic of Benin and is the day name of a female child born on a Sunday. Kosibah’s clientele is truly worldwide, although particularly well represented in the UK, Nigeria and USA.Kosibah specialises in contemporary and elegant couture bridal, evening and formal day wear using luxurious fabrics and sumptuous embellishments.  Yemi’s signature use of corsetry and boned bodices cleverly recreates the classical and elegant hourglass figure, producing gowns that curve, shape and flatter the wearer. All gowns are made to measure and made to order. He is currently one of the hottest designers celebrity brides go for.

Toluwaloju Olowofoyeku  known as Toju Foyeh also her fashion brand name was born in the late 80’s.She  developed a passion for fashion at a young age as she was surrounded by several family members who were into fashion while growing up. In the early ’90’s, her mother sold unique fabric pieces and her grandmother was a designer who attended the London College of Fashion. Toju obtained an LLB Law from the University of Reading, UK and an LLM from the University of Manchester, also in the UK.After graduation, she  decided to follow her passion by enrolling for degree programmed at the world famous Instituto Marangoni in Milan. After the degree  she returned to Nigeria to attend the Nigerian Law School before setting up her fashion business Toju Foyeh which has stealthily grown to become one of the biggest fashion brands in Nigeria especially for her bridal wears.

Talented designer Yemi Shoyemi is another big brand in the fashion world with specialty in wedding couture gowns. The Abuja based designer  studied Business Administration at the University of Abuja She started sewing at age five, practising with doll dresses and throw pillows .Asides making her mark with bridals, she is also known for her couture dresses for red carpet  , awards and a list events. She recently designed the lovely wedding gown of Oba Tejuosho’s daughter, Abisoye.

Mai Atafo is a Nigerian bespoke fashion designer who  caught the attention of the fashion industry for the creation of his brand, Mai Atafo and by enrolling the Leeds-based Savile Row Academy to further train as a tailor. Mai Atafo was born in Ile-Ife, Osun State. He spent his early life in Lagos, attended the University Staff School Benin then the Federal Government College, Ido-Ani, Ondo State Mai Atafo later earned a master’s degree from the City University UK in Information System and Technology.Mai Atafo, upon returning from the United Kingdom in 2002 worked in various positions in the marketing department at British American Tobacco Nigeria, In 2006 he left to Guinness Nigeria where he sat as Brand Manager as of his resignation in 2010.Before leaving Guinness Nigeria, Mai Atafo started a bespoke clothing label; Mai Atafo Inspired, that gained media acclamation by a pioneering clientele of mostly celebrities like Omowunmi Akinnifesi, Banky W, IK Osakioduwa and a host of others. He sat briefly as Fashion Editor for Genevieve Magazine.In 2011, Mai Atafo through his parent brand Mai Atafo Inspired, launched a wedding line called Weddings by Mai and is one of the hottest brands patronised by Nigerian celebrity brides at the moment.

The name  Olakunbi Oyelese rings a bell in the fashion world in Nigeria especially among brides as her bridals is the most patronized in Nigeria, She attended the renowned New York Fashion Institute of Technology. She launched her fashion label April By Kunbi in April 2010, Her label specialises in custom made and ready to wear attires ranging  from wedding gowns, bridesmaid dresses, evening and cocktail dresses to casual/active wear, sleepwear, footwear, accessories and lingerie.

Another female brand most celebrities don’t joke with for their red carpet dresses in Style Temple owned by Abuja based female designer Og Okonkwo.The stylish designer is a  Medical Laboratory Science graduate from the University of Nigeria, she also has a certificate in fashion merchandising. Asides making dresses for some entertainment celebrities, she is also renowned for making bridal wears especially for Northern brides.

Andrea Iyamah owned by Nigerian fashion designer Dumebi Iyamah, is a clothing line strongly inspired by color and ethnic cultures. With a flair for fashion and the arts, she advanced her tailoring skills and educated herself about fashion which later fuelled the genesis of the A.I. brand at an early age of 17.Although Andrea Iyamah is popularly recognized for its eccentric and unique take on swimwear, using vibrant colours and cuts inspired by an array of African cultures, the brand also specializes in ready-to-wear and custom made special event dresses. Strongly influenced by the brand’s African heritage, a blend of retro and various cultures inspired the colours and themes of the first official swimwear collection which launched in 2013.Located in Ontario Canada, the brand caters to females across borders and is well patronised by Nigerian celebrity brides.

5 Destructive Topics You Must Not Bring...

All The Things That Happen When You...