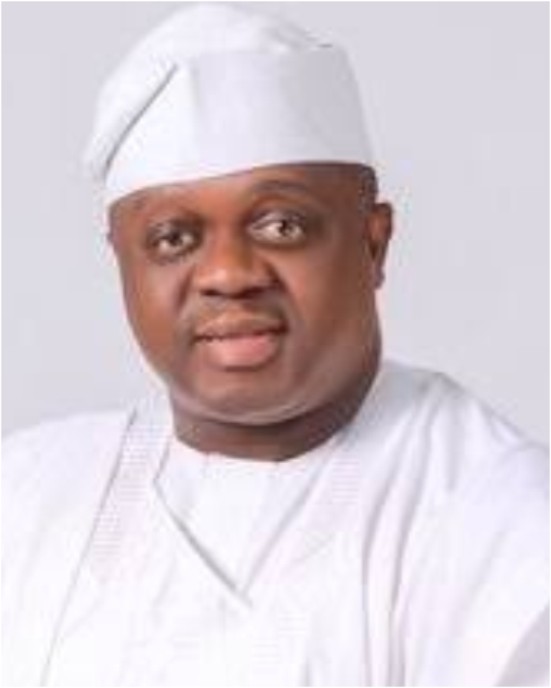 As the 2023 general elections draw near, politicians in Ogun State have started politicking and campaigns are in top gear to contest for different posts. Ogun Central senatorial district is one of the districts that will cause a lot of chaos, considering the powerful and strong contenders from the districts. Another factor is that some political Godfathers already have their own candidates who are also running under the same party.

These aspirants also are not new in politics as some of them have contested and held one or two political posts. They will all have to rally for support from the 6 Local Government areas under Ogun Central senatorial district namely: Abeokuta-South, Abeokuta-North, Obafemi-Owode, Ifo, Ewekoro and Odeda in the forthcoming primary election.

BUNMI MUSTAPHA brings you the list of 10 top politicians aspiring for the Ogun central senatorial seat.

Senator Olugbenga Obadara is the aspirant to beat in the race. He is a ranking Senator. The son of the first Executive Chairman of Odeda Local Government, Chief Joseph Olajide Obadara, is planning his come back to represent Ogun central senatorial district, come 2023.

Whilst in the Senate, he was the Chairman of the Privatisation and Commercialization Committee and the only Chairman of a Senate Committee from the South West of Nigeria.( He was a member of ECOWAS PARLIAMENT and the representative of ECOWAS in the UNITED NATIONS.  Before coming into politics, he was a thoroughbred Corporate player with the following achievements both in Nigeria and internationally.

He is the Founder and Chairman of LUCINDA MEDIA LIMITED, the owner of SWEET FM 107.1, the first Entrepreneurial and Business Radio Station in Nigeria. ( He later debut in the Nigerian telecommunications business becoming Managing Director of Imperial Telecommunications which pioneered pre-paid call cards and electronic directories in Nigeria.

Although former Governor Ibkunle Amosun who is the current Senator representing Ogun Central is yet to announce is interest to contest for the Presidency come 2023, he has dropped hints on who he prefers to take over his current position.

Emerging details have it that Taiwo Adeoluwa is being positioned to replace him at the Senate if he goes for the Presidency.

Barrister Taiwo Adeoluwa served as the Secretary to the Ogun State Government (SSG) in the 2 terms of Amosun as the Governor (2011 to 2019).

The holder of a Master’s Degree in Law from the University of Lagos is the first politician to hold a back-to-back position of SSG in Ogun State.

Inside sources reveal that Senator Amosun is preparing Adeoluwa as a worthy successor, as he’s about to declare his ambition for Presidency.  Two other challengers for the ticket of the All Progressives Congress (APC) have sprung up in the rival faction headed by Governor Dapo Abiodun.

Barrister Adeoluwa was said to be nursing the ambition to contest for Senate before now, but when former Governor Amosun showed interest in contesting after leaving office, he held on and waited for 2023 to contest.

It is an open secret in the Amosun camp, that Adeoluwa is the preferred successor if the Presidential ambition flies.

Salisu Afolabi Shuaib, the Chief of Staff to Governor Dapo Abiodun is also gunning for the post of Senator representing Ogun Central.

The Chief of Staff is banking on his relationship with Governor Abiodun to get the party ticket to contest for Ogun Central.

Fondly called SAS, between 2011 and 2014, Salisu served in the cabinet of the former Ogun State Governor as Deputy (and later Acting) Chief of Staff.( He holds a 1986 second class (upper) degree in Computer Science of the University of Lagos, from where he also got two master’s degrees – an MBA in 2003 and an MSc in Computer Science in 2012.( A consummate intellectual, Salisu has diverse and extensive knowledge of the corporate world, public service and not-for-profit organisations. ( A Certified Business Intelligence Consultant and a fellow of the Computer Society of Nigeria, he has attended several conferences and delivered papers on corporate governance, ICT and management across four continents and is a respected voice in the ICT industry.( He is credited as a pivotal partner in the restoration of the integrity of the Joint Admissions and Matriculation Board through computer-based tests. Before then, he led the World Bank project that midwife the transport sector transformation in Lagos State and was the main ICT consultant in Edo, Ekiti and Kano States and the FCT at different times. In his previous “incarnation”, Salisu was a banker at the defunct Equatorial Trust Bank and Pacific Merchant Bank.

Olumide Osoba is a member of the House of Representatives, representing the Odeda/Obafemi Owode/Abeokuta-North constituency in the 9th National Assembly.

He is the son of former Ogun State Governor, Chief Olusegun Osoba. Has also been at the forefront of legislative efforts to give the Nigerian children a better tomorrow in the scheme of governance in Nigeria. And it’s really no shock that the quiet lawmaker is being touted for a big political assignment come 2023.

Olumide, who is following in the footsteps of his respected father, might be walking his way to a historic reckoning in Ogun State politics going by the long list of projects facilitated and completed by him in the last few years of legislative assignment.

Chief Olumide Aderinoku is the Akinruyiwa of Owu Kingdom. Chief Olumide, a realtor and businessman is also another strong aspirant whose ambition is to represent Ogun  Central senatorial district. He is also a strong member of the PDP and has the backing of the majority in the party.

Olumide has made his intention known for more than a year now and he is serving as the district’s most effective representation his willingness to offer himself for service inspired him to create the Olumide and Stephanie Aderinokun Foundation with his wife, a project that has touched every aspect of education, youth empowerment, business funding and non-interest loans for traders.

He has shown to be a leader who does not hesitate to speak up, do something whenever he sees something that is not right and not fair. This golden jubilee feat signals his quest for more service to the people.

The Foundation has instituted financial scholarships for students in higher institutions who are indigenes of Ogun Central Senatorial District; summer coaching lessons for secondary school students across the six Local Government Areas in the Senatorial District, and has distributed learning materials to children in primary school and hosting a quiz competition for the 2021 Children’s day. Born on August 18, 1971, in Lagos, Olumide Aderinokun had his elementary school at Albalti Nursery and Primary School, Papa-Ajao, Lagos. He then proceeded to Mushin Boys High School, Isolo, Lagos and finished his secondary school education at Apata Memorial High School Isolo, Lagos where he obtained his Secondary School Certificate.

He travelled abroad for tertiary education and attended the University of East London where he obtained a B.SC (Hons) in Business Studies.

Aderinokun entered politics in 2011 when he lost his bid to represent his party at the Nigerian House of Representatives on the platform of the People’s Democratic Party (PDP). He tried again and won the primaries to represent Abeokuta North Federal Constituency on October 3, 2018.

Aderinokun is married to media personality Stephanie Coker. They have a daughter who was born in November 2019.

Another strong contender for the 2023 Ogun Senatorial district is Professor Yemi Oke. Information has it that Oke has been consulting major political actors and notable leaders in Ogun State and particularly Ogun Central Senatorial zone

He also has requisite political experience, having been exposed to national and Ogun politics in the early 80s through his late father, Chief Kasali Oke and late Uncle, Chief Muftau Osayemi (Baba Oja). He began playing active politics in 1989 under the Zero party era and thereafter twice contested for the Abeokuta South Federal Constituency for the House of Representatives in 2007 and 2011. He has also served in several agencies, commissions, bodies and other statutory institutions in Ogun State and at the Federal level as a technical expert and consultant.

PYO, as he is fondly called, has written 10 major Law textbooks on Energy Law, Electricity Law; International Institutions, and over 120 law articles in international and local journals. He is the Managing Partner/Founding Principal, MJS PARTNERS, which also has other subsidiaries.

Adebola Sofela is another aspirant for the Ogun Central Senatorial District. He is a strong member of APC, Emmanuel Adebola Sofela popularly known as SHOFFI has consulted the leaders of the party to make his intentions known and to ask for their support.

Adebola’s career is filled with 32 years of post-graduate experience that spans banking, financial services, and telecommunications.

He worked in the banking industry up until August 2011, rising up the ranks to Divisional Director and General Manager at Equatorial Trust Bank Limited (Now Sterling Bank PLC). Afterwards, he transitioned to the telecommunications industry as the Group Treasurer and Director of the Executive Office at Globacom Limited. He held his position at Globacom Limited until February 2018.

Adebola also served as the Managing Director/CEO of Bridge Capital and Investments Limited. He was able to hone his entrepreneurial drive in financial advisory services, stockbroking, investment management, tax advisory services and financial consulting. He committed his time to regularly working with SMEs and as a result, became very acquainted with the problems they encounter with Development Financial Institutions. He provided tailored and customized solutions to these companies and assisted them with overcoming the challenges of accessing financial assistance.

After an extensive career in the private sector, Adebola is now utilizing his skills and making an impact in the Public sector. He is currently the Managing Director and Chief Executive Officer of the Lagos State Number Plate Production Authority, the flagship state corporation that produces vehicle number plates and aluminium based signage. He has held this position since August 2019.

Olatorera Majekodunmi-Oniru is making giant strides in the race. She is for now the only female who is vying for the senatorial seat under the Ogun Central Senatorial District of the APC. She has shown strong commitment and efforts towards her ambition for 2023.

According to her, 2023 will usher in a new election cycle in the country, and young Nigerians must be ready to take over the baton and lead painstakingly.

READ ALSO: WHY MANY FEEL THERE WON’T BE ELECTIONS NEXT YEAR

Why Many Feel There Won’t Be Elections Next Year

Why I Called My Autobiography Double Jeopardy – Dr DOYIN OKUPE