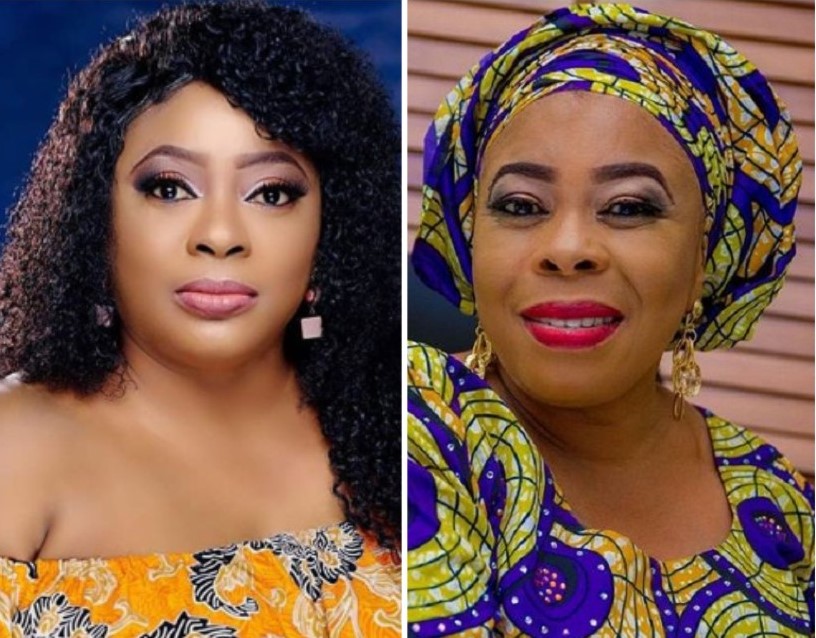 •Details Of Their Plans In The US & CANADA

Ayo Adesanya and Toyin Adewale are no doubt veterans in the movie industry, they both feature in English and Yoruba movies. These two multi-talented ladies have paid their dues in the industry, thereby commands lots of respects from their colleagues and junior colleagues in the industry. Toyin Adewale is very successful actress, her birthday will be coming up June 11th, and arrangement is in the top gear to celebrate this friendly and hardworking icon. A grand celebration will be held for her in the U.S., where she presently resides, as she relocated few years ago with her husband and her daughter while her sons stayed back to pursue their career over here. Her son Mayorkun, the mayor of Lagos is a successful music act under the popular musical label DMW. He has won several awards home and abroad, and highly celebrated in Nigeria, and the second son Ayobami Adewale popularly known as Ayo Freeman is also an artists and repertoire, his main job is matching an artiste with the right producer to make a hit song lots of Nollywood stars especially the ones living in Houston Texas will be turning up for the grand celebration of Toyin Adewale Golden Jubilee’s celebration.

Ayo Adesanya will also be celebrating in grandstyle, as she is already making all the necessary celebration for her Golden Jubilee on August 11th, it is really going to be a big celebration of an icon, as aso-ebi will be sold for the party, all the big names both in the English and Yoruba industry will be turning up for the party,  she maintains a very cordial relationship with lots of her contemporaries and younger colleagues in the industry. After the Nigeria celebration, she will be hosted to a special birthday bash in Toronto Canada by her friends and great fans over there. It was gathered that one of the most expensive Fuji act will be at the bandstand for the Nigeria party while another popular U.K. based Fuji act will also thrill guests at the Canada party.

Ayo Adesanya besides being an actress is also a producer and a movie director, she was born 11th August, 1969 in Ijagun Ijebu, Ogun State.

She feature in both English and Yoruba movie frequently, she is gifted, skillful, creative talented in acting and interpreting roles given to her by movie producers and directors she is so hardworking and talented, that she takes up to two or three characters in a movie and still interprete each role so well. She bagged B.A. in Mass Communication from University of Ibadan, started acting in 1986 doing school drama and stage play.

She was once married to Goriola Hassan and later divorced, the union produced a son Niyi Iremitide, who is prsently 13 years old.

Besides her exceptional acting skills, Ayo Adesanya is beautiful, friendly and down to earth. Toyin Adewale was born in June 11th, 1969, she worked as a literary crities for the Guardian Post Express and Daily Times.

She writes in both English and German. Born in Ibadan, Oyo State, had her M.A. in Literature from O.A.U., she was co-founder and cordinator for several years of the association of writers of Nigeria.

Toyin is no doubt, one of the most respected actresses in the Yoruba section of Nollywood, she enjoyed a career and life devoid of scandals, dirty drama and controversies she is married to a songwriter and film director who has been in the industry for over 30 years.

Her acting career started in 1988, and also feature in both English and Yoruba movie, especially, English soap operas. She met her husband Sunday Adewale in 1988, when she was a student of Remax Institute in 1988, they got married and celebrated her 20th anniversary in 2013. Her marriage has so far lasted for 26 years and still counting, one of the very few Nollywood marriages that has stood the test of time.

Before she relocated to U.S., she was the CEO of Tastylee Catering Service, which she ran for close to 20 years, and the catering outfit, has catered for over 100 celebrity’s parties in and outside Lagos.

Toyin started stage performance with the likes of Ben Tomoloju, Anta Laniyan Salome Eketunde, Yinka Davies and lots of others.

She relocated to U.S. few years ago with her husband and their only daughter, while the two boys stayed back in Nigeria and she has been featuring in movies shot in U.S. by nollywood stars based there.

Life Has Taught Me A Lot At 50 – Popular Actress, TOYIN Adewale

IDIA AISIEN Talks About Life As A...

How I Composed My Hit Song, Olorun...