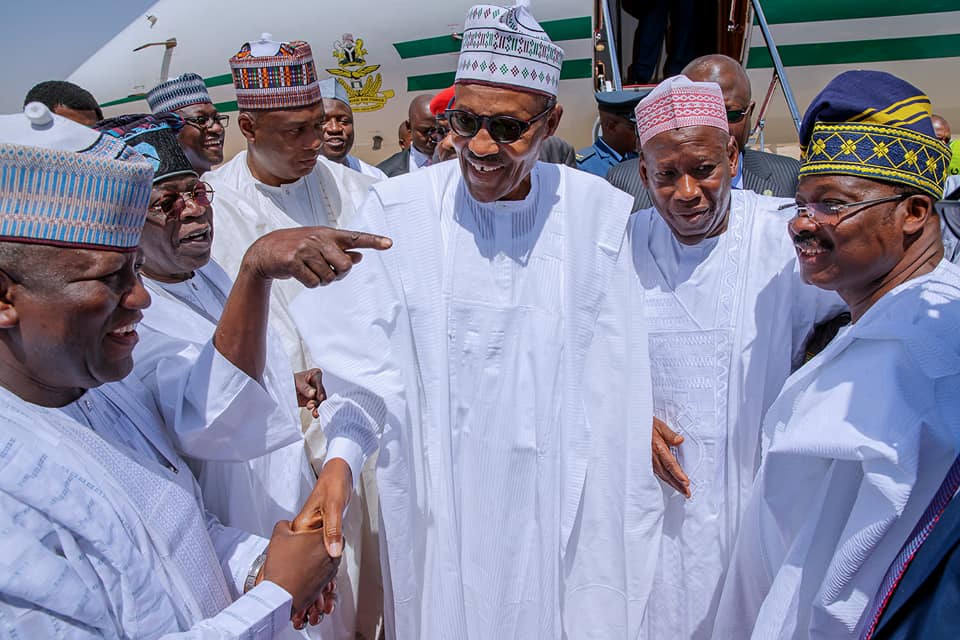 A faction of Afenifere, the Yoruba socio-political group, on Tuesday endorsed the candidacy of the All Progressives Congress presidential candidate, Muhammadu Buhari, less than three weeks to the presidential election.

This was in opposition to an earlier posture of the leadership of the group led by Reuben Fasoranti, which has backed the candidate of the Peoples Democratic Party, Abubakar Atiku.

The two endorsements, supposedly representing the opinion and interest of the Yoruba race and the people who live in the South-west region of the country, is another confusion propelled by politics and interests other than those of the people.

The faction, led by 93-year-old Ayo Fassanmi, who hails from Ekiti State and a well known member of the Afenifere, is obviously receiving the backing of the national leader of the APC, Bola Ahmed Tibunu, whose longstanding disregard for the Afenifere leaders over political differences had reached a bitter peak.

Mr Fasanmi and his group claim their support and endorsement of the president for a second term is due to his remarkable performance in the last years of the administration.

To underscore the calibre of support it enjoys, the group’s endorsement ceremony was attended by important persons in the region such as the Vice President, Yemi Osinbajo, as well as the Deputy Governor of Lagos and Osun States, Idiat Adebule, and Yetunde Onanuga, and a former minister, Demola Seriki, who represented Mr Tinubu.

The presence of Messrs Osinbajo and Tinubu at the event underpinned the seriousness the political gladiators attached to the endorsement of the president, suggesting that the action of the group could automatically translate to a resounding victory for the president in the region.

That came after the Fasoranti group expressed its willingness to support Atiku Abubakar, giving credence to the fact that the present political powers could not wish away the influence of the Afenifere in their effort to deliver the region to the APC come February 16.

Although the players in this new movement are not new in the game, the fact that they do not have another name, other than Afenifere, further spread the mist of confusion over the region’s political horizon.

Mr Fasanmi’s recent outspokenness against the Afenifere group became profound following the suspension of the governorship candidate of the Social Democratic Party in the last governorship election in Osun State, Iyiola Omisore.

Mr Omisore, a former deputy governor in Osun State and a member of Afenifere, was suspended for backing the APC during a rerun election, and helping the ruling party regain the lead and eventually win the election.

Afenifere, under the leadership of Mr Fasoranti, suspended the former senator for a year for abandoning the mandate of Afenifere backed SDP and pursuing the interest of the APC.

Mr Fasanmi, in a statement, in reaction to Mr Omisore’s suspension, declared that the Fasoranti-led group lacked the powers to issue such suspension. He also said the group should no longer speak for the Yoruba because “they are presently clinging to a conservative politics which negates the principles which Obafemi Awolowo stood for”.

“It is laughable and disappointing for anyone to desecrate the hallowed name of Chief (Obafemi) Awolowo with conservative political tendency as being espoused by the Fasoranti and Ayo Adebanjo group that has crossed the red line,” said Mr Fasanmi, who was a member of the House of Representatives in 1964-1966 and a Senator in 1979-1983.

“The spirit of Chief Obafemi Awolowo will never forgive whoever has taken steps to bastardise the legacies he fought for all his life. They should not put Yoruba race on sale. The Yoruba race is comfortable with the progressives as being represented by the All Progressives Congress, where the Yoruba is having the chunk of appointments, which has never happened even when Chief Obasanjo was president.”

Afenifere leaders are not taken by surprise at Mr Fasanmi’s onslaught.

Femi Okurounmu, a chieftain of the group had in December 2018, accused Mr Fasanmi of allowing himself to be compromised by Mr Tinubu and had become a stooge of the APC at a time he ought to be giving directives to younger politicians.

He is believed to have left Afenifere since 2003 after South-west governors chose to make a deal with President Olusegun Obasanjo and lost out. And according to Yinka Odumakin, who is the spokesman for the group, Mr Fasanmi had not been involved in Afenifere activities in the last 10 years.

However, Afenifere is backing Mr Abubakar basically for his articulation of the agenda to restructure the country, a position the group had sold as its political agenda for the region.

Although it had backed Mr Buhari when he contested in 2011 on the same grounds, Mr Buhari lost the election to Goodluck Jonathan.

The group chose Goodluck Jonathan for president in 2015, and endorsed his candidature after promising to implement the 2014 report of the national conference, particularly the clause on restructuring of the country. But Mr Jonathan lost the election to Mr Buhari.

The political dispensation offers a number of interesting scenarios. Howbeit, it presents a test for Afenifere’s current standing in the eyes of the Yoruba people.

Undoubtedly, Afenifere, is at its defining moment. Its consistent intervention and speaking loudly on issues affecting the region portrays it as a major voice of the region.

There is also the assumption that the group which stands as the most politically salient legacy of Obafemi Awolowo, the then Premier of Western Nigeria, still has the ears of the descendants of Oduduwa. However, the existing allotropes of the Afenifere movement appear to be giving a lie to its claims that it stands for the Yoruba unity.

Not a few have mentioned the decline in influence of the group.

It had a mission to inform and propagate the principles and ethics of the party to their people who neither speak nor understand the English language. It has the genuine commitment to ensure the people had the good things of life.

Individual leaders of the group are generally well respected, not only because of their age, but also because they had excelled in their chosen fields and made individual contributions to the development of the country.

However, not many of the region’s constituents are sure the group represents their concerns and political and economic aspirations.

Reasons for the decline in the influence of the Afenifere have been suggested by some leaders in the region as the parade of pecuniary interest by some elements within the fold, following the gradual passage of the respected founding fathers of the group.

While the radical thrust of the Afenifere philosophy as driven by the Awolowo, unified the common regional interest of the Yoruba people and provided leadership, political education and economic aspirations; the current state of the group, seems to be well distracted by divisive and narrow political interest to which the people themselves have no stake.

While the pristine Egbe Afenifere was sagaciously said to equal the defunct Action Group, the party formed and fired by Awolowo, the elements of the present day Afenifere are scattered by partisan politics of widely differing political ideology.

As has been observed, the poor showing of Alliance for Democracy at the 2003 elections, where the PDP attained ascendancy in the region at the expense of the AD, which was the adopted political party of Afenifere, also stirred a whirl of centrifugal forces further tearing apart the hitherto united body.

Such was the reason for the emergence of the Afenifere Renewal Group, which assumed a task of uniting the disenchanted members and renewing the vision of the founding fathers.

It also became a platform for the opposing voices of the contending elements within the wider Afenifere fraternity. As it seems, the bigwigs and leaders with national clout had often shared opposing political interest against those of the natural leaders of the group.

At the end of the dark days of the military, it was thought that Afenifere will fully regain its life after it was reformed with the late elder statesman, Abraham Adesanya, as its leader and Bola Ige, also of blessed memory, was his deputy.

Its outlook fundamentally resembled the original Afenifere so that its agenda was adopted by the Alliance for Democracy, at its creation in 1998, as its manifesto.

With the passage of Pa Adesanya, Mr Fasoranti was made the leader of the group In November 2008 at a meeting in Ijebu Igbo, Ogun State. Shortly after the emergence of Mr Fasoranti as the leader, some members of the group, came up with the Afenifere Renewal Group (ARG) which stood for years in opposition to the Fasoranti group.

Those who have reasons to disagree with the mainstream Afenifere have opined that the group had not always been an all-inclusive umbrella for all political tendencies in the South-west, but was only for those who pledged allegiance to its principles.

As this notion gained prominence, and with continued contending voices, the influence of the group continued its plummet.

There was a glimmer of hope for the group when Mr Tinubu paid a surprise visit to the Akure country home of the Afenifere leader sometime in November 2017.

Mr Fasoranti and other members of the group received him, giving the impression that the era of unity for the group had come.

Mr Tinubu’s visit at the time coincided with the period of his travails at the hands of the president and the APC leaders who seemed to have forgotten his role in ensuring Mr Buhari’s election.

Momentarily, the sudden warfare existing between Tinubu and Afenifere on one hand and with Governor Rotimi Akeredolu of Ondo on the other hand came to a halt.

During the visit, Mr Tiinubu said Mr Fasoranti is a respected Yoruba leader who deserves respect, care and support especially in his present age.

When asked if it was for political realignment ahead the 2019 elections, he insisted his visit was private to seek Mr Fasoranti’s “wise counsel on a number of issues”.

That experience did not last.

Now that the political interests and aspirations of the region’s leaders are irreconcilable, as evidenced in the contrast of political platforms and ideals, Afenifere is again shredded along these same fault lines.

However, would the endorsement really sway votes? Not a few think the macabre dance of endorsements only works to line the pockets of the elements within the groupings, and really have no bearing on the electorate whose minds have been made up on who would earn their votes.

This is the time for politics. Every move matters so long as it counters the opposition. Nothing is taken for granted and no effort is spared in reaching the goal.

The expediency of the time supposes that all men to themselves would be until the storm of the elections are over. This is the picture that Afenifere currently cuts before the eyes of the mass of South-west voters.

The house is divided, but yet to completely fall apart.

But the Fasoranti-led group is still offering the remnants of Afenifere adherents some hope and a home, to serve as the denuded conscience of the people.