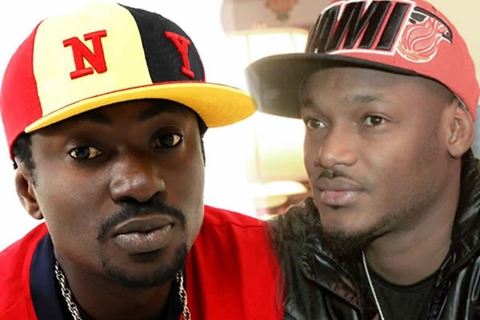 A letter sent through his lawyers, Seun Omotoba & Co, Nigerian musician, Innocent Idibia, popularly known as 2face or 2Baba, demanded that his former bandmate, Blackface should apologise to him or get sued after making series of song theft allegations against him.

According to the letter dated May 5, 2Baba said that Blackface has a week to apologise to him and his manager, Efe Omorogbe, or be dragged to court over all the defamatory remarks he has made about him.
While speaking exclusively to LIB in a reaction to the letter, Blackface, real names Ahmedu Augustine Obiabo, says he has received the letter from 2Baba’s lawyers but vows never to apologize.
“They sent me that letter some days ago asking me to apologise. Rastaman apologises to nobody man. Rasta will never apologise to them because they are filled with evil and fuckery so they should go to hell and anything they want to do they should do but I know that my lawyers should have served them already. What am I apologising for? Somebody takes your music and then you apologise? Is that for real?
“They are really playing with themselves and I think the manager is putting him in a whole lot of trouble. They know they are in a whole lot of trouble. They took a lawyer from Oshodi bridge to write something for them who does not even know how to weigh the case and know what to even write. Illiteracy is around them. They are crazy. They don’t even know what they are doing.
“The evidence is there that they sang my song and somebody else published it. It is my song and somebody else published it. I am not even talking about African woman right now. I am talking about Let Somebody Love you. That song shouldn’t have been released without my permission because it is my song.
“The manager went to publish my song. I don’t know what kind of pilfering they are doing because they are industry crooks. They are robbing the industry of a whole lot of things. That is what they are doing,” he said.
Below is 2Baba’s letter to Blackface; 2baba’s Lawyer Writes Blackface To Apologise And He Replies ‘Go To Hell’ was last modified: May 12th, 2017 by Arinze Ago