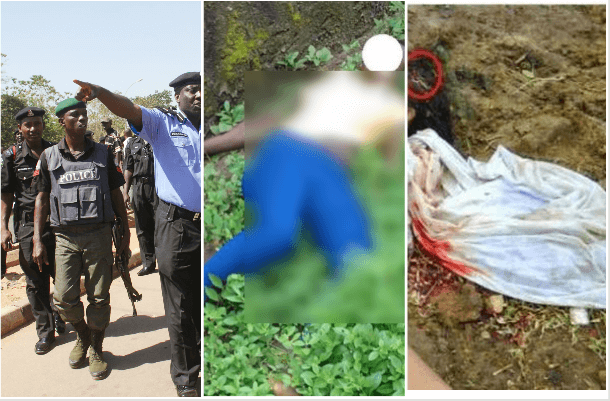 The residents of Okpoko in Ogbaru Local Government area of Anambra State are now living in fear over the discovery of three female bodies dumped beside a canal in the area with their private parts missing.

The corpses were discovered in the morning when the residents were going to their respective places of work. P.M.EXPRESS gathered that what baffled the residents, was the similar manner their private parts were removed and their corpses dumped beside the Sakamori carnal in the area.

Some of the parts removed were the breasts, tongues, vagina and others before the remaining bodies were dumped by the unknown persons perceived to be ritualists. The identity of the victims were not known as the residents claimed they were not known faces in the area.

According to the residents who spoke on the incident, it was one of the residents who saw one of the corpses and raised alarm which attracted other residents who went there to check if they would be able to identify the victims. The resident said that it was when they were still there that two other corpses were also discovered and the parts were removed like the first one they saw.

The incident triggered fear and panic because of the manner they were brutally murdered and dumped there. They had to contact the police who went to the scene and saw what happened. Their corpses were later removed and taken to the mortuary for autopsy report.

P.M. EXPRESS gathered that the incident has caused serious panic and tension within the Onitsha metropolis as the residents were now scared of moving around freely.

Some residents wondered what would have caused such wasting of human lives in that manner. The few residents who spoke to our correspondent attributed it to the Anambra governorship election coming up in November. They said that it was due to the election as some politicians may be performing some rituals with human parts to win election. But their claims cannot be verified.

When our correspondent visited Okpoko Police Division, the police confirmed the incident and said they have removed the corpses and taken to the mortuary for autopsy report. The police also said the identity of the victims were not yet known as nobody has come to report of their missing persons to ascertain if they were part of the victims.