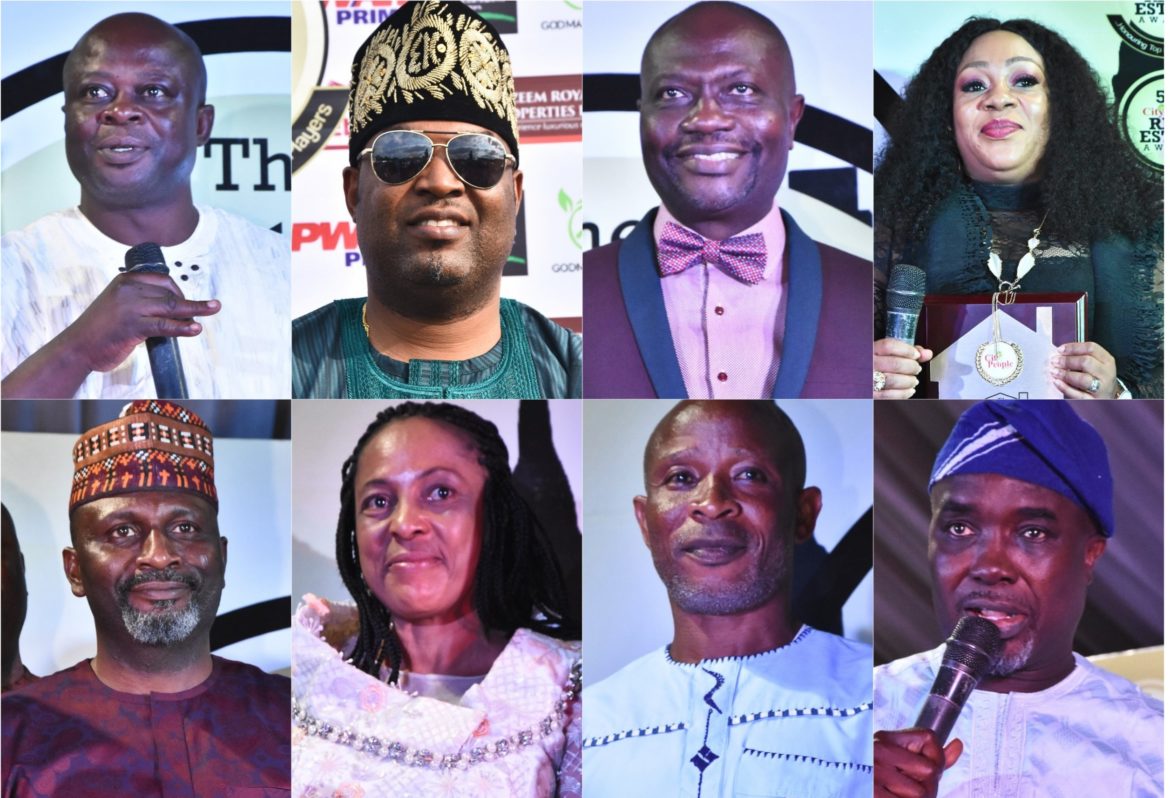 Lagos State is the hub of real estate in Nigeria. This is evident in the huge number of property players in the industry. In the last few years, many young, vibrant, players have emerged and they have changed the face of the industry. They are not only young, but full of ideas, and innovations and this has enabled them to be above many other players who started before them.

These individuals through their companies, have built several estates, opened up new communities and cities within the Lagos State and environs. This week, City People will be unveiling 50 of them who are making good impact.

The first name on the list is Dr Kennedy Okonkwo, the CEO of Nedcomoaks Properties. This is one man, who has singlehanded built many housing estates and has also opened up many communities in Lekki corridor of the state. A few years ago, he was in Forbes Magazine Africa, where he spoke about issues affecting real estate in Nigeria. Dr Kennedy is a big property developer, who has built more than 1,000 housing units. In the last few months, he has completed many housing projects in the Lekki-Ajah axis.

Let’s also tell you about Mr Richard Nnyong, who is popularly known as Lekki gardens. As we all know, he had a problem years ago when one of his houses collapsed and was charged to court. But he’s back stronger and bigger, and the company has been rebranded. Lekki gardens is a big name in the real estate sector and whenever you hear about Paradise court, it’s Lekki gardens.

At present, they have worked and restructured all the loopholes that could be of danger in the future and they now have capable hands in every area. As for projects, they are one of the few real estate companies with many big housing projects scattered around the country.

Another top property who has continued to do well is Aare Adetola Emmanuelking, GMD, Adron Homes & Propweties. He is another top real estate player who has been playing big in the sector over the years. He is the Managing Director of Adron Homes & Properties. His property firm is all over Lagos. Almost on a daily basis, he starts up a new housing estate. Now, he has over 40 offices in Lagos, and in the last few months sold many landed properties. His wife, Olori Aderonke Emmanuelking, the Executive Director of Adron Homes & Properties, also plays a very important role. Otunba Yemi Lawal is another big player in the property sector. He plays big in the Oniru & Ikoyi areas.

Let’s also tell you about Mr Bamidele Onalaja. He is the Managing Director of RevolutionPlus Property Development Company. He is a top property player, who has distinguished himself. Recently, he extended his real estate arm to Ibadan where he now plays big with other players there. In Ofada Mowe, he is currently building a block of a housing unit. And he has also acquired more than 6 estates this year where they sell land. We can’t talk about Revolution Plus Property without mentioning Tolulope the amiable wife of Mr Bamidele Onalaja. She is the Executive Director of the company. They co-run the company and their combination has yielded positive results.

Babatunde Gbadamosi is the developer of Amen Estate Phase 1 & II. He also contested the 2019 Guber election in Lagos. Talk of a big estate where celebrities live in Lagos, Amen Estate would also be mentioned. Now, houses are currently selling at Phase II of Amen Estate. Amen Estate is on Eleko road before Ibeju Lekki town. His wife, Sade, is the Financial Director of the company. They have both done well this year.

Adetoro Bank-Omotoye is another name who has distinguished himself in the built sector. He is the MD of Cruxstone Development & Investment Ltd. At present, the company is working towards another massive project that will change the face of real estate on Victoria Island. The project’s name is Cruxstone Towers.

Chief Emmanuel Okafor is the MD/CEO of Marcopolo Properties in Lekki. Marcopolo is a sole property development company and it has been in existence for over 22 years. Chief Emmanuel is one of the pioneers of property development company in the Lekki-Ajah axis. He has been consistently building there and other highbrow areas in Lagos. Recently, he built a block of units at Chevy-View Estate in Lekki where they are currently selling.

Chief Samuel Odinamadu is also playing big. He’s the Chief Executive Officer of SKC Properties Ltd. He’s one of the leading property development players in Lagos. He’s currently building housing units at Orchid Hotel Road opposite Eleganza Bus Stop, Ikota, Lekki, Lagos. He is one of the property players who have done well so far this year.

We cannot also forget Chief Murphy Osuala, the Managing Director of Empire Homes, the popular Property Development company in Lagos. He’s currently doing massive projects behind Chevron head office in Lekki, Lagos. He also has another housing estate at Orchid Hotel Road, opposite Eleganza House, Lekki. Chief Murphy has been in the real estate for decades and he is still waxing stronger by the day.

Another person, who has done well is Mr. Bashir Jimoh, Managing Director of Bashmoh Homes. Bashmoh Homes has land that’s currently selling in and out of Lagos. Recently, they acquired big Properties in Magboro and Ibadan. This property firm is one of the leading property companies when it comes to sales of land, as it has built plenty of trust in the minds of people. Segun Olusanya is the MD of Schemelink Properties Ltd. He is also doing well in the area of land acquisition and sales.

Adeniyi Adams is the MD/CEO of Knightstone Properties Limited. Knightstone is into land sales and housing development. It has just completed a couple of housing units in Ajah axis. Mr Adeniyi is a real estate guru, who has travelled far and wide to deliver a lecture on real estate and other related topics. He’s well respected among his contemporaries.

Ben Odunzeh is the MD/CEO of EUC Group, a pan-African real estate firm. A few months back, the company signed popular actress, Juliet Ibrahim, as a brand ambassador. Mr Ben is currently the biggest landowner in Ibeju Lekki, Lagos. He acquires large expanse of land and sells at affordable rates. He has also moved to the Eastern part of Nigeria recently where he’s equally doing well. He’s one of the leading property players this year, who have been very active in the sector.

Engr. Lekan Aderinwale is also doing well. He is the MD of Structmatics Engineering, a reputable housing construction firm. Engr. Lekan is a young structural engineer who has carved a big niche for himself as one of the best brains in the sector. Currently, he builds houses in Lekki axis. He has become the toast of real estate Investors.

Sir Olu Okeowo is the CEO of Gibraltar Construction. He has several blocks of flats on Rumens road in Ikoyi. He builds only in the highbrow locations in Ikoyi, Lagos. He’s one of the few property players who have never compromised on standards. The Gilbraltar boss is one of the leading players in that sector, who has been consistent.

Chief Emeka Uzoeto is the CEO/MD of 1st Homes Limited; a reputable construction company. Chief Emeka is undoubtedly one of the top property players in Lekki at present. He has built over 50 housing units this year alone. He has ongoing housing projects in Osapa London, Victory Park, Agungi, Chevron area, all in Lekki. He has become a strong developer in that axis.

Engr. Toyin Adeyinka is the Managing Director and Chief Executive Officer of Sparklight group. Currently, they have massive housing projects in Magboro that are selling at affordable rates. He is a man with over 30 years experience in the real estate sector.

In Lekki-Ajah axis, precisely in Chevy-View estate, we also have another property guru, who has been doing wonderful housing projects in the last 5 years. He is Chief Ishmeal Emeka Udenka, Chairman of Lucky Gardens Estates. He is another top player in that industry.

Another name in the industry that has been doing well over time is the Chairman of DPKay Homes & Properties, Prince Dele Akinola. He has many housing units developed in Lekki axis, and he also has landed properties in Lagos currently selling at affordable  prices. We can’t also forget Aare Adeleke Adebesin, Chairman of Kings International Homes & Properties. He is one of the big boys in the property sector. What about the MD of Yankees Construction & Co., Mr David Ezeodo? He is a top property developer, at Osapa London, to be precise.

Mrs Elizabeth Grace of Godmade Homes is another top player in that sector. What about the owner of Luxury Gardens in Osapa, Dr Mrs Rita Onyejesi? She is one woman who has disguished herself in that sector. Dennis Oberabor is another player, doing well. He’s the MD of PWAN Premium. Jeffrey Agbim is also doing well in the area of construction. He is the CEO of Jedmoon Properties.

Hakeem Ogunniran is the CEO of Eximia Realty Co Ltd. He set up this company a year ago, shortly after he left his former post, UPDC. And he has continued in the real estate sector.

The list won’t be complete without the name of Prince of Osapa London, Kazeem Austin Eletu-Odibo for his outstanding projects at Osapa community. He has positioned himself as a role model for other developers in that area. He has spent over 500 million naira on roads and drainages, at Osapa London.

Which Is The Best Move Between IBEJU-LEKKI...

Showbiz Stars Who Own Big Mansions In...