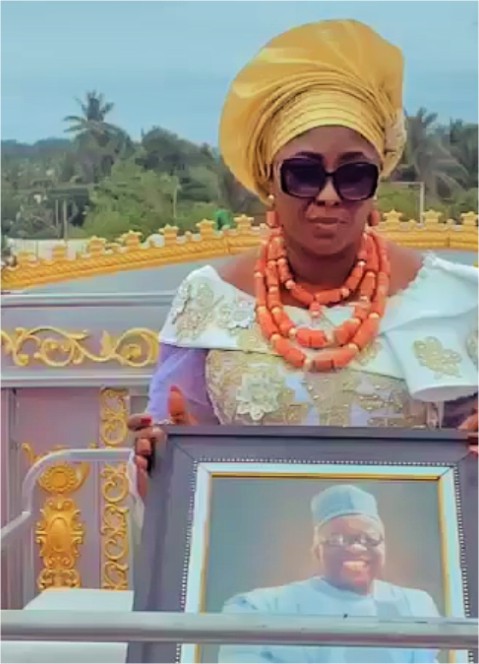 The burial commenced on Monday 19th of April, 2021 which was the opening of the mourning house at the deceased residence at no.13 Secondary School Road Akamkpa town. By exactly 7am community elders and women had taken vantage positions as they accorded honour to a man who was a Chief who lived a life of service to his people as an educationist and community leader. While the preparation of other activities was on top gear The Redeemed Christian Church of God on Friday 23rd of April, 2021 held a well attended service of songs at the residence of late Ntufan Dominic Omin Omin with several goodwill messages and tributes coming from well placed government officials and those who benefited from the tutelage of the deceased while he was alive. From Port Harcourt, many social clubs which the first daughter belongs to including Port Harcourt Recreational Club 1928, Golf section that has Women League of Women Golfers played major roles in making sure that Mrs. Tari Bozimo, one of their own, accorded her late father a befitting burial rite.

On the fateful day of interment Mrs. Tari Bozimo widow to late High Chief Gordon Bozimo Bayelsa State born former Chairman of Board of National Youth Service Corps Scheme, NYSC and former Chairman of Nigerian Agricultural and Cooperatives Bank who also was Board, BoT member of Peoples Democratic party-PDP and Chief Executive Officer CEO, of Lotus Hotel and Bozgmero Estates Abuloma Port Harcourt in Rivers State, staged a fairy tale burial carnival for her late father which had a luxurious Mini Open caravan driven hearse which conveyed her in a large motorcade along the streets of Akamkpa the Council Headquarters of the rocky quarry rich community and tourism haven of Cross Rivers State South-South region of Nigeria. The good hospitality of the Ejighalam ethnic nationality in Cross River state was at display as many dignitaries who graced the occasion had enough of sumptuous cuisine of the good people of Akamkpa to their delight as they had the ceremony turned a good jolly spot for celebration of life of a worthy community leader in the pedigree of late Ntufan Dominic Omin Omin who was born on the 12th of July, 1941 and died on the 13th of March, 2021 having celebrated his 80th birthday before his demise.

The first son Mr. Dominic Omin junior who led a Church outing Service on Sunday 25th of April, 2021 also played host to dignitaries who accorded the late community leader final rite according to Christian doctrines of The Redeemed Christian Church of God Akamkpa. The thrills and funfair of the undertakers made the burial proper glamorous indeed which is a good testament of how the late Ntufan Dominic Omin Omin raised successful children with his surviving wife who retired as a school teacher of repute.

How Gov. BUNI Bounced Back As APC...