9 Reasons Your Woman May Be Cheating On You 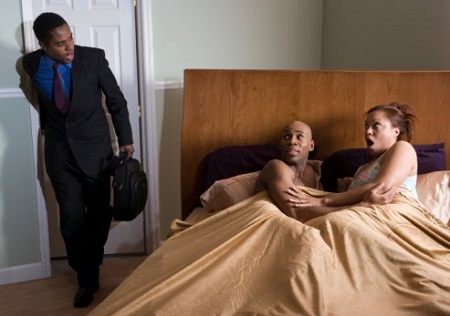 One of the biggest tragedies that can befall any man is to find out that the woman you call your wife has been having an affair. In all honesty, most men don’t think anything of it when they cheat on their wives, as far as they’re concerned, it’s a man’s world. So long as they have not chosen to marry that other woman as a second wife, then wifey shouldn’t grumble about anything. But when the situation is reversed and they find out their adorable wife has been rolling in the hay with another woman, then all hell is let lose! Now, why would a woman want to cheat on her man? Statistics have shown that only a small percentage of women actually cheat on their husbands, the number of cheating husbands is far greater. Yet, there still are a small chunk of women who cheat. What could be the reason(s)? Here are some factors we think could make your woman, whether you’re married or not, cheat on you and defile your marriage or relationship.

*You treat her badly. If you’re the type that treats your woman like she’s a piece of trash and demean her at every given opportunity, making her break down emotionally, then you’re certainly pushing her into the arms of another man outside. This is a situation that, if it persists for long, then your marriage or relationship is heading for the rocks.

*You abusive physically. In these days when the world is standing up against men who physically abuse their women, you can be sure you’re only going to leave your woman no other choice but to seek comfort and affection elsewhere.

*You don’t love her anymore and you can’t hide it. At first, the woman might think she can make you change and love her again, but as time goes on she realizes that no matter how hard she tries to please you, you can never bring yourself to loving her again. And she can’t leave you because of the kids. So, what does she do? She stays in your house, sleeps in your bed, but sneaks out to meet another man who still finds her charming.

*You don’t show her any respect. This is something every woman craves for in a relationship. Respect is important to every woman, so once you begin to disrespect her constantly, shouting her down all the time in the presence of people without giving a hoot how she feels about it, then you might just be pushing her into arms of another man.

*You don’t even listen to her. This is another issue women hate to deal with in their marriage or relationship. They simply can’t stand it when their man never listens to them or seek their advice in matters that bother on the family. The moment she finds a man who gives her attention and listens to her, she’ll fall for him.

READ ALSO: ALL MY MAN WANTS FROM ME IS SEX & NOTHING ELSE!

9 Reasons Your Woman May Be Cheating On You was last modified: December 14th, 2020 by Wale Lawal

All My Man Wants From Me Is SEX & Nothing Else!

Crediometer will be expanded in the next 3 years – CEO, George

My Man Only Remembers Me When He...