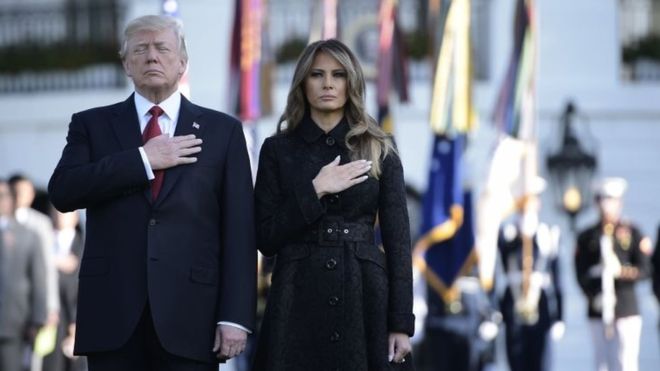 President Donald Trump has presided over his first 9/11 commemoration in office, marking the 16th anniversary of the attacks.

He and first lady Melania observed a solemn moment of silence at the White House and later at the Pentagon.
Thousands are gathering nationwide to mark the deadliest attack on US soil.

“Our values will endure, our people will thrive, our nation will prevail, and the memory of our loved ones will never, ever die,” Mr Trump said outside the Pentagon.

Mr Trump joined Defence Secretary James Mattis and General Joseph Dunford, chairman of the Joint Chiefs of Staff, at the Department of Defense to remember the lives lost on 9/1

1.
“The terrorists who attacked us thought they could incite fear and weaken the spirit. Those who try will soon join the long list of vanquished enemies who dare to test our mettle,” he sai

d.
Earlier, Mr Trump appeared at a White House for a commemoration that took place at the same time relatives of 9/11 victims, survivors, rescuers and others gathered at New York’s 9/11 memorial on Monday at 08:46 local time (12:46 GMT) to mark the exact time the first plane struck the World Trade Center’s North Tower.

Two beams of light shoot into the sky in place of the Twin Towers to mark the 11 September attacks
The second plane slammed into the South Tower at 09:03.

The names of the 3,000 killed were read aloud at the 9/11 Memorial and Museum as bells rang out in memory of the dead.
Each year on the anniversary, two light beams illuminate the sky in place of the two towers.

Mr Trump and the first lady later observed a moment of silence at the Pentagon at 09:37, when US officials say American Airlines Flight 77 crashed into the building.

The fourth plane went down at 10:03 in Shanksville, Pennsylvania, where crew members wrestled hijackers for control of plane, forcing it down in a rural field instead of its intended target in Washington.

Vice-President Mike Pence and Secretary of the Interior Ryan Zinke are due to appear on Monday in Shanksville, where ground was broken a day before for a 93ft (28m) tower at the Flight 93 National Memorial.
The Tower of Voices will remember the 33 passengers and seven crew members who died on Flight 93