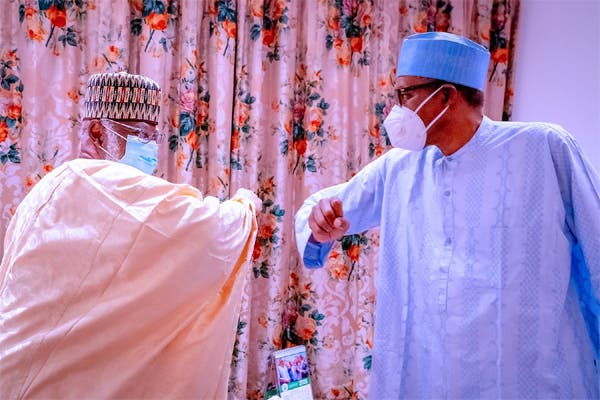 A former Head of State, Gen Abdulsalam Abubakar, and President Muhammadu Buhari, Friday met in Abuja. The reason for their meeting was not disclosed, but it will not be unconnected with the security situations, economic hardship and other social maladies affecting the country.

Bashir Ahmad, Personal Assistant on New Media to the President disclosed this on his twitter handle. According to him: “President Muhammadu Buhari receives in audience former Head of State Gen. Abdulsalam Abubakar (rtd) at the State House, Abuja.”

Meanwhile, Nigeria in the past few months has experienced spate in kidnapping. For instance, on 11 December 2020, over 300 pupils were kidnapped from a boys’ secondary boarding school on the outskirts of Kankara, Katsina State, and northern Nigeria.

Again, on February 26, 2021, about 300 female students of GSS Jangebe in Zamfara state were abducted by gunmen. On March 12, 2021, gunmen invaded a Federal College of Forestry Mechanisation in Mando, Kaduna state, and abducted 39 students.

Most of these students have been released through the intervention of security agencies. The 39 students are still in their captive camp.

Yesterday, parents of the 39 abducted students of Federal College of Forestry Mechanisation in Mando Igabi Local Government Area of Kaduna State, have appealed to the state governor, Nasir el-Rufai, to negotiate with the bandits and secure the release of their wards. Recall that the governor had always insisted that his government would not negotiate with bandits, insisting that they needed to be completely routed by security agents.

He Got My Friend Pregnant, Should I...