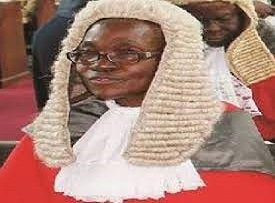 A Federal High Court in Abuja has scheduled judgment for April in the suit by the Chief Judge of Ondo State, Justice Oluwatoyin Akerdeolu.

Justice Akeredolu, in the suit marked: FHC/ABJ/CS/2016/2021 is claiming among others, that the Ondo State Governor, the state’s Attorney Gneral and House of Assembly were plotting to remove her from office under the pretext of investigation the allegations made in a viral video by Olupelumi Fagboyegun, alleging that the Chief Judge influenced his detention for about three years.

Justice Inyang Ekwo adjourned for judgment on Friday after lawyers to parties, including Jibrin Okutepa (SAN) for plaintiff; Ngosoo Uchegbu (for the AGF), and Tunde Laaro (for the NJC), made their final submissions.

Justice Akeredolu alleged among others that the decision by the state government, through the former Attorney General (AG), Charles Titiloye, to refer the allegations made against her and the state’s judiciary by Fagboyegun in the viral video to the House of Assembly for investigation was an illegal act designed to remove her from office.

Okutepa had in an earlier submission before the court, noted that the Ondo AG claimed to have investigated Fagboyegun’s allegation, without hearing from the CJ, and stated that he (the AG) found that Fagboyegun was granted bail on March 18, 2018 when he was arraigned before the Magistrate Court and was never detained as he claimed