Adesua Etomi and other Nigerians clamour for the return of singer Cynthia Morgan! 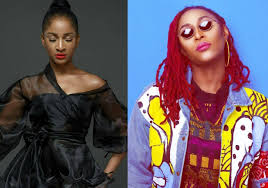 popularly known by her stage name Cynthia Morgan has been noticeably absent from the music scene for a while now and even her social media appearances are so limited.

This has led some Nigerians to ask for the whereabouts of the talented artiste who is known for her fusion of pop, hip hop, dancehall and rap.

Nollywood actress Adesua Etomi woke up thinking about the German juice crooner and she appeared on twitter with her curiosity asking where Cynthia Morgan was.

Her tweets had awoken the curiosity of many others who also asked the same question.

“Where is Cynthia Morgan?”

Although Morgan appears on Instagram once every blue moon, the 26 year old star has not been as active as she used to be. She also hasn’t dropped a hit recently and now we are all curious and eager to have our girl back

Adesua Etomi and other Nigerians clamour for the return of singer Cynthia Morgan! was last modified: April 18th, 2018 by Igbokwe John

Why Olamide shouldn’t release an album this year!