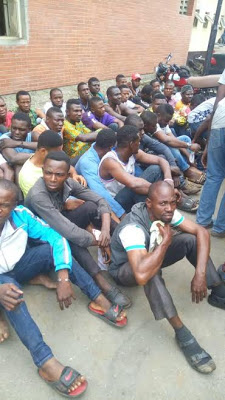 The Oyo State Police Command says Ibadan residents should stay calm over recent killings being linked to ‘Badoo boys’ that once terrorized Ikorodu in Lagos State.

According to Punch, the residents of Abatakan, Ojoo, Fatokun, Moniya, Olomowewe, and Akingbile have been living in fear in the last few days.

As a consequence, the residents have resorted to returning home early from their daily activities and remain indoors, while advising visitors to call them on the phone before venturing into the areas.

A resident, who spoke on the condition of anonymity, said, “People in my area now bolt their doors around 5.30 pm; whoever wants to visit must call and be properly identified.

“Even those, who sell consumables, now ask their customers to call them before they can open their doors.”

About six people have been reportedly killed in three operations in the last month by hoodlums suspected to be members of the gang in different locations in the affected areas.

Apart from the six, who lost their lives in strange circumstances, Punch reported that a woman was hospitalized with a very deep cut allegedly sustained after she was attacked by the hoodlums.

The victim, according to sources, is in a coma as of the time of filing this report.

The spokesman for the Nigeria Police Force in the state, Olugbenga Fadeyi, said, “I want to appeal to residents not to entertain any fear over this development as the police will apprehend the suspects soonest.

“Residents of the state, including journalists, should not be too quick to compare the operation of these attackers to that of Badoo boys of the Ikorodu, Lagos, experience. We should not engage in anything that will create fear in the hearts of the people.

“I am saying this because people tend to believe the story and maybe running helter-skelter when the case has not actually degenerated to that level.

“Already, the command is clamping down on some suspects; very soon, the police authority will definitely parade them. Again, people should be ready to assist the police with credible information though we have our officers, both uniformed and others in the neighbourhoods.

“People with credible information should endeavour to call our control room on 07055495413 and 08081768614 from every nook and cranny of the state to report distress situations.”

READ ALSO: WHY I ADOPTED SACK YOUR LANDLORD AS MY SLOGAN – LAGOS PROPERTY PLAYER, DEBO ADEJANA

Why I Adopted Sack Your Landlord As My Slogan – LAGOS Property Player, DEBO Adejana