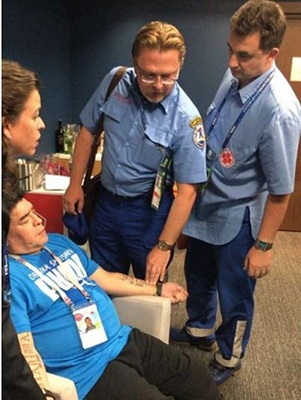 The Argentina icon – who has rarely been out of the headlines during Russia 2018 – believes Colombia were victims of a “monumental theft” and laid into the performance of the officials.

FIFA responded and described the 57-year-old’s comments as “entirely inappropriate and completely unfounded”.

A statement read: “Following comments made by Diego Armando Maradona in relation to Tuesday’s round of 16 game, Colombia v England, FIFA strongly rebukes the criticism of the performance of the match officials which it considers to have been positive in a tough and highly emotional match.

“Furthermore, it also considers the additional comments and insinuations made as being entirely inappropriate and completely unfounded.

“At a time when FIFA is doing everything within its power to ensure principles of fair play, integrity and respect are at the forefront of this World Cup and how the organisation is now run, FIFA is extremely sorry to read such declarations from a player who has written the history of our game.”

Jose Pekerman’s side received six bookings in a tempestuous match, but Maradona had said Colombia could feel robbed and questioned the decision of FIFA referees chief Pierluigi Collina to appoint American official Geiger.

Speaking to teleSUR , he said: “I saw a monumental theft on the pitch. I apologise to all the Colombian people, but the players are not to blame for this.

“Here is a gentleman [Collina] who is the one who decides to choose a referee by just Googling him. He cannot be put in to referee a match of this magnitude.”