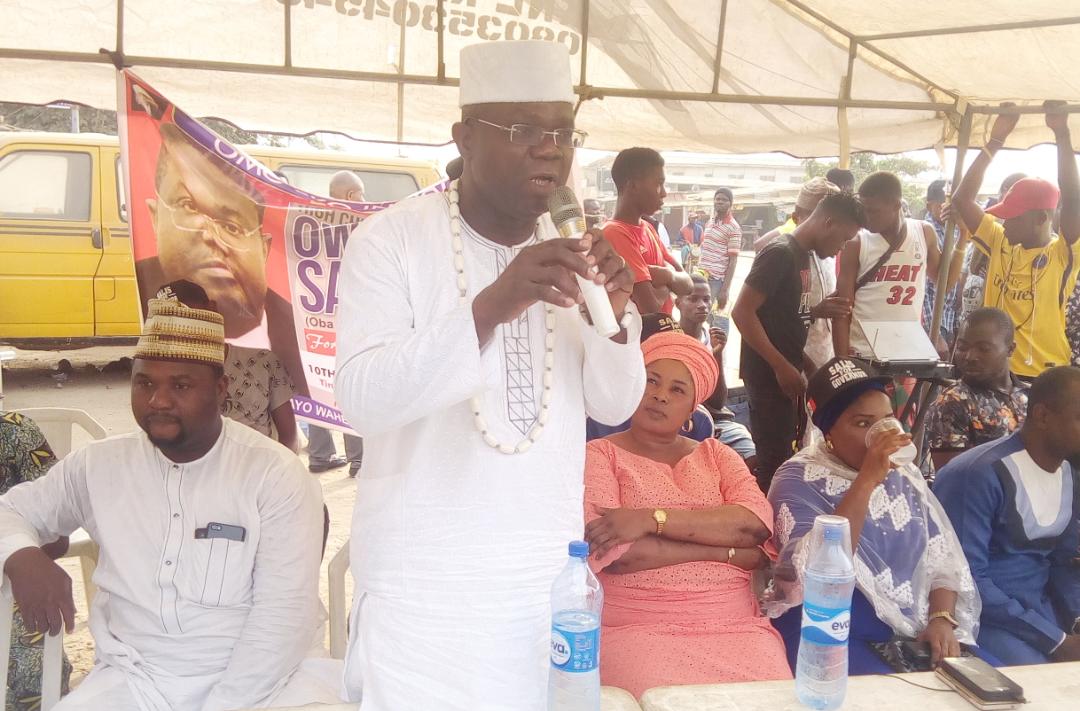 The Youths in Alimosho, the largest and most populated local government area in Nigeria have decried the rate of neglect and rejection of the current government in Lagos and have vowed to vote in the governorship candidate of Alliance for Democracy (AD), High Chief Owolabi Salis.

Okunola community in Alimosho went agog on Thursday at the arrival of Chief Salis who was welcomed by a mammoth crowd as he laid his mind bare to the teeming youths who came to welcome him.

Speaking at the event, Mr Tosin Afuwape who said had contested as a councillor in one of the wards in the local government on two different occasions said he had been a victim of imposition as his mandates were denied after the godfathers imposed their anointed candidate.

He further reiterated his commitment to leading other youths to vote right at the March 2 election and ensure that they monitor their votes to make sure that it counts this time around.

Popularly referred to as ‘Oba Mekunnu’ meaning king of the masses, Chief Salis revealed that should he emerge as the next governor of Lagos, his focus would be to bridge the gap between the rich and the poor by providing basic needs of life like job, housing, education and involvement of the people in the system of governance.

The man behind Salis foundation, which has empowered over 54, 000 youths across the state revealed how passionate he is about ensuring a better livelihood for all Lagosians while addressing the youths.

He said “I’m here to let the people know that the time has come for them to choose wisely, to let them know I’m contesting for the masses and that I want to be next governor of Lagos state. My slogan is ‘Eko a tu wa lara’ meaning Lagos will be comfortable for us all because I have the people in mind and the governance of the state will be centred around them. I’m also here to bridge the gap between the rich and the poor.

“We need to address this right now because the people are suffering in terms of provision of affordable and convenient housing. All of people are out there sleep under the bridges; people like us can afford to build our houses but what about the poor? In other countries of the world, there are provisions for them but not here. I hope I win this election and I’m sure going to do these for them (the people).

“I’ve been talking to some of the youths here and we’ve been doing some empowerments for them to take them (Alimosho youths) out of the streets, When we start the grassroots governance system, it has a lot in it to offer them, many of these youths will be out of the streets and be engaged because there will be a lot of jobs at the grassroots. So the ward executive council, a grassroots governance system recognised by the government is the solution. It’s a standing system that I’m going to practice and we are going to get funds from certain individuals in this state because they have so much money and put it in the grassroots, so that they can upgrade themselves.

“The situation is so bad for the less privileged, nobody cares about them, I am going to do it because this is the right time for them.”

Alimosho Youths Vow to Vote In Cheif Owolabi Salis As Next Governor Of Lagos was last modified: January 15th, 2019 by Damilare Salami