Home News All Hail The New ORIMOLUSI OF IJEBU-IGBO
News 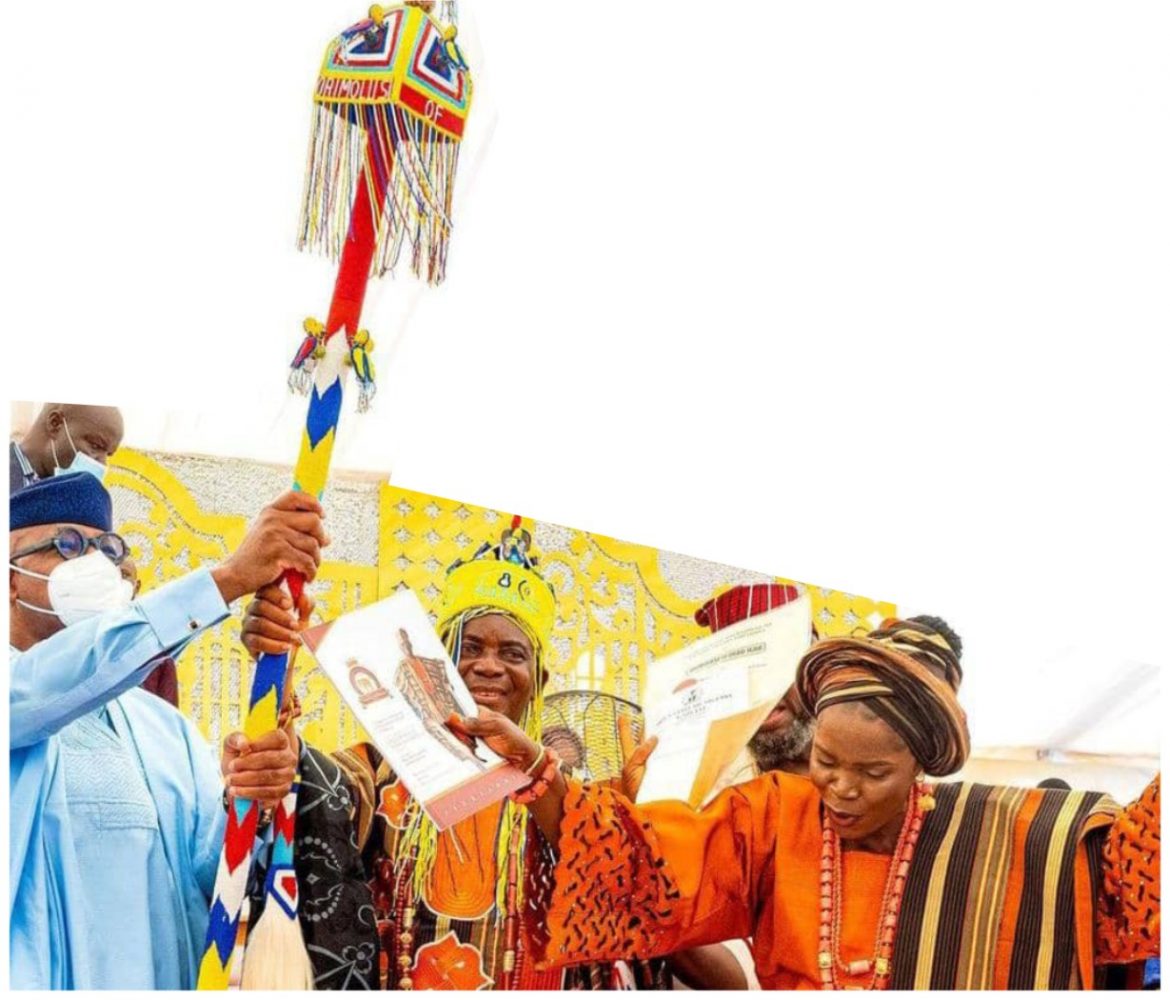 •Details Of The Coronation Of OBA LAWRENCE JAIYEOBA ADEBAJO

Ijebu Igbo now has a new King after 28 years. On Wednesday, 23rd February 2022, Ijebu-Igbo came alive when the Coronation, Installation and Presentation of Staff of Office To His Royal Majesty, Alaiyeluwa, Oba Lawrence Jaiyeoba Adebajo was done by Gov. Dapo Abiodun, the governor of Ogun State. The event which took place at Abusi Edumare Academy, Ijebu-Igbo, Ogun State attracted a lot of dignitaries across the country. City People was at the event with a powerful team who covered the historic event. See below the blow-by-blow account of how His Royal Majesty, Oba Lawrence Jaiyeoba Adebajo was installed. It was a colourful event.

For the sons and daughters of Ijebu-Igbo and even a first-timer to Ijebu-Igbo, Abusi-Edumare Academy is a school strategically located at the entrance of the town.

The venue had a gigantic canopy big enough to accommodate most dignitaries with a fence and gate for those invited only, also all guests were asked to dress in white for the coronation.  Other canopies were erected aside the gigantic Canopy within the venue of the event to accommodate different age grades that came to honour the new Orimolusi and also pledge their allegiance. There were two music bandstands, one inside the giant canopy and another outside. Also outside the giant canopy was a giant screen to enable people who cannot access the inside to watch proceedings.

As early as 8am in the morning of Wednesday, 23rd February 2022, people invited and even well-wishers started coming into the venue for the coronation of the new Orimolusi. At precisely 10am, most Royal Highnesses from other Ijebu towns drove in convoys to rejoice with the new king and show him, love.

SECURITY AT THE VENUE

Various security outfits were on the ground to provide protection and help in removing possible attacks, amongst these were the Nigeria Police led by a very senior officer, the Civil Defence Corps, Vigilante Service of Ogun State, Agbekoyas, Odua People’s Congress, Federal Road Safety for easy traffic flow.

Prior to the new Orimolusi’s arrival to the venue, different noises from drummers and people were dancing, some were taking pictures and it was all beautiful to behold.

The Ijebu-Igbo sons and daughters walked and danced, while some vehicles drove ahead from the city centre to the venue as all securities cleared roads for easy passage to the venue for the new King. It was a glorious and triumphant entry for Oba Lawrence Jaiyeoba Adebajo. While the chants of Kabiyeeeesiii ooo!! rent the air, the king responded by waving the horsetail(irukere) at the people.

As Oba Adebajo stepped into the venue, everyone within the coronation venue stood on their feet to announce Orimolusi’s arrival with his lovely Oloori beside him. This included all Kings present.

Shortly after the Orimolusi and his Oloori had taken their seat within the venue came the Executive Governor of Ogun State, Prince Dapo Abiodun, He came with his large entourage and immediately he came into the hall, he was welcomed by his Deputy, Engineer Noimot Salako, the Secretary to State Government as well as the Honourable Commissioner for Local Government and Chieftaincy Affairs. Governor Abiodun freely greeted all the royal fathers who stood to honour his arrival, moved to greet the new Orimolusi, before taking his seat at a special stage arranged specially for the occasion.

Within the gigantic Canopy is a special stage where special seats were arranged for the representative of Awujale who happened to be the Dagbunrewe of Idowa, Oba Yinusa Adekoya, a white three(3) seater executive seat for the executive Governor, a white double seat where the deputy governor and the secretary to Ogun State Government sat, another white executive chair where the Honourable Commissioner for Local Government and Chieftaincy Affairs sat. The new Orimolusi and his Oloori were seated a bit far opposite the high stage specially arranged for the governor.

Some eminent persons made speeches at the coronation. They include The Coronation Committee Chairman, Chief Femi Dinah (FCA) who welcomed all guests and appreciated all who, one way or the other, worked towards the coronation. The next to speak on behalf of the Chairman, Board of Trustees, Ijebu-Igbo Council of Elders was Professor Ogunye, he went into how the litigations were handled and how God helped to resolve with the wisdom from the Council of Elders. The Ijebu-North Local Government Chairman was not left out. He thanked the Secretary to the Ogun State Government, Mr Tokunboh Talabi for his efforts.

The Awujale of Ijebuland who was represented by Oba Yinusa Adekoya, the Dagburewe of Idowa sent a message. He excellently enjoined the Orimolusi to work cooperatively with other sectional obas in Ijebu-Igbo for him to have peace. Awujale prayed that Orimolusi’s reign will be peaceful and successful. Awujale classified Alayeluwa Lawrence Jaiyeoba Adebajo to be lucky as over forty(40) Ijebu Obas came to rejoice and witness his Coronation. He also prayed for long life for the new Oba.

In another goodwill message, a former Deputy Governor of the state and Senator Alhaji Adegbenga Sefiu Kaka spoke eloquently. He surprised all present with perfect prayers in Islamic, Christian and traditional ways.

Goodwill’s message came from the Honourable Commissioner for Local Government and Chieftaincy Affairs in Ogun State, Hon. Abiodun Afuwape. He congratulated Governor Dapo Abiodun for the coronation after twenty-eight (28) years. He appreciated all those who worked relentlessly for choosing a widely acceptable candidate in Oba Lawrence Jaiyeoba Adebajo and wish him well.

His Excellency, The Executive Governor, Prince Dapo Abiodun told the gathering after singing praises that the coronation meant so much to him so he flew in that morning from Abuja purposely to present the new Orimolusi his staff of office. The governor shocked and surprised many sons and daughters of Ijebu-Igbo with the story of how the title Orimolusi came about to replace the old title known as Oloja’gbo. He expressed his joy as a prince that the twenty-eight years of no Orimolusi ended in his time. He prayed for a successful reign for the king and announced the admission of the Orimolusi into the Council of Obas in Ogun State. He thereafter presented both Staff and Certificates to the newly installed king while the whole hall chanted Kabiyesii ooo!!!

ACCEPTANCE SPEECH BY THE NEW ORIMOLUSI

The newly installed Orimolusi, in his acceptance speech, thanked the Almighty God, referring to God as King of Kings. He thanked the governor and everyone. He further sought the cooperation of all sons and daughters of Ijebu-Igbo to move Ijebu-Igbo to a laudable height. He referred to a word mentioned thrice by Awujale in their previous meetings testifying to the dexterity and zeal of the Ijebu-Igbo people with a right king of which he would be. He extended the hands of the royal hood to all contestants. He also eulogised a departed Prince, Late Prince Sadiku and asked for a minute silence in his honour.

As a custom in Ijebuland, every newly coronated Oba must dance to Gbedu as a way of acceptability. The representative of Awujale of Ijebuland and Dagbunrewe of Idowa, Oba Yinusa Adekoya and other Ijebu Obas present joined the new Orimolusi show their dance skill as they danced Gbedu for all to see.

All Hail The New ORIMOLUSI OF IJEBU-IGBO was last modified: February 28th, 2022 by City People

Meet The Super Big Boys Who Spray At Parties

How OBJ & OONI Rallied Round OLU...