Meet The Super Big Boys Who Spray At Parties 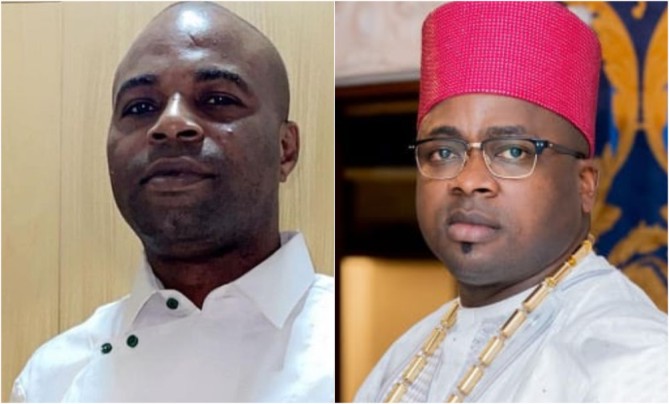 It has become a recurring decimal at Lagos parties right now as super-rich big boys now compete with themselves on who spends the most on the party stage. This act has gradually crept into the society like a colossus that you must be decked with wads of note to spray at any party you are attending. There are some set of big boys who spray at parties like money is going out of fashion, in fact, they don’t spend in pieces anymore, they spend in bails. They are very rich and their businesses can be likened to Oil and Gas, Real Estate and Night clubs. One party that literally threw everyone off balance in fact, it gave some millionaires run for their money was when the king of nightclub, Obi Cubana hosted thousands to his mother’s burial in Oba, Anambra State. It was a party which was been talked about for weeks in fact it trended online that it was topping Google list as the most searched event. Naira and foreign currency became like water flowing everywhere, in fact, many invited and indigenes of that town shared in the money largesse as he was throwing money in bails to the crowd.

Let’s also talk about the most popular male caucus at a party right now, it is no other than NURTW Boss, Akinsanya popularly known as MC Oluomo. He is a socialite per excellence. He knows how to party hard and so also loves to enjoy himself. He has become a regular face at major parties, especially in Lagos. When MC Oluomo gets to any party, you can be sure that the tone of the party will change, everything moves in his direction. In fact, musicians at the parties always praise sing him till he leaves the party. He spends heavily on the party stage.

He does not move alone, he moves with this legion of big boys who are top members of his cabinet in NURTW while some are not members. Who are these big boys? They also have their own followership too in their respective positions, some who are his right-hand guys who party with him are Koko Zaria, Kudety Asiwaju, Sego, Adesina Okanlomo, Abacha Ijoba Deptford, Akintoye Benson, Jimoh Buhari, Tantolohun, comrade Ibrahim Yusuf and many others

When they storm any party, they light up the party, they appear in expensive outfits and spend lavishly as if it is going out of fashion. They sit together and many people always struggle to get their attention. They always want to snap pictures with them and connect with them. They are the toasts of many musicians at parties. On their table, you are sure of sighting the most expensive cognacs on their table. They drive expensive cars and live life to the fullest. On this list is the chairman himself, MC Oluomo whose real names are Alhaji Musiliu Akinsanya.

There is no gainsaying that MC Oluomo is always the star of Owambe parties. In the last 1 year, his calendar has always been full and he still gets invites to many parties as we speak. Many people always want him to be their guests, he loves his entourage and never look down on anyone. In this caucus is his closest dude, Kokozaria whose real names are Alhaji Ganiu Ayinde Oyedepo.

Alhaji Ganiyu Oyedepo is known in the Nollywood industry and Lagos social circles by the nickname Koko Zaria. The father of four is a talented Nollywood Actor, NURTW chieftain and entrepreneur based in Lagos. The over 50 years old Lagos big boy was born in 1970 on the 20th of May to the illustrious family of Oyedepo in Omu Aran, Kwara State.

His father Alhaji Oyedepo is from the popular Oyedepo family. Koko Zaria is also known by the following nicknames: Zargarza Koko Zaria and America Boy. On his arrival to Lagos, he joined the transport business and union and quickly rose through the ranks to become one of the top men of the union. At the moment, Koko Zaria is a National Union Of Transport Workers (NURTW) Chieftain. He is currently the deputy chairman of the Lagos chapter of the union. His boss is Alhaji Musiliu Ayinde Akinsanya alias MC Oluomo, his number 1.

Koko Zaria is also a politician and he is affiliated with the ruling All Progressive Congress (APC) party. What about Kudety Asiwaju? He is also one of the party rockers, his real names are Sulyman Atanda Ojora, the Asiwaju of Ojora Kingdom. He is also very close to MC Oluomo and of late they have been attending parties together. The dark in complexion big boy is the Deputy Chairman, NURTW in Lagos State and naturally, he enjoys a very close relationship with his boss, MC Oluomo. Another business he does is auto business, he is the CEO of Kudety Motors. So also is Alhaji Shittu, the state Vice Chairman, of NURTW. You will always find him among the MC Oluomo caucus.

Also is Sego whose real names are Alhaji Adio Adekunle Olanrewaju. He is the treasure of the Union. Whenever you see Kudety, he will be there as well. The trio of Mc Oluomo, Kudety and him are popularly referred to as the 3 pillars of the Union. He was both together with MC Oluomo in France recently.

Popularly nicknamed Tantolohun, Alhaji Wasiu, the great money spender at parties is also part of this caucus. He is close to MC Oluomo and many of the musicians always sing praise him. He is known to share a great friendship with Fuji act, Pasuma.

Comrade Ibrahim Yusuf is the powerful finance director of the Lagos State NURTW, you will always find him in the company of Kudety Asiwaju as well. He is popularly called Ibro Alaba. Popular hotelier, Adesina Okanlomo who is a core businessman is not part of the Union but very close with these big boys, in fact, a few weeks back when he celebrated his birthday, many of them showed up at his residence. The dark-complexioned big boy has rocked the party scene with this caucus in the last few weeks. MC Oluomo was one of the people who graced his private birthday. He is always seen with another big boy, Jimoh Buhari. He is very popular in his area Abule Ado. He is the CEO of Chillers Hotel and suites.

Popularly called Sanni Abacha Ijoba Deptford of London, Eedriz Bamidele is another cool big boy who calls the shot within this caucus. He is well travelled and shuttles greatly between Nigeria and London. He is also well connected. The light in complexion big boy celebrated his 45th birthday not too long ago. He is very close to MC Oluomo. When you mention the MC Oluomo caucus, then celebrity big boy, Akintoye Benson’s name must crop up. The chubby and dark in complexion man is very close to MC Oluomo. In the last couple of months, they have been stepping out together. He dresses well and is always the toast of musicians too as they sing to praise him at parties. He has been attending parties back to back and is well-loved within the caucus. Comrade Nataniel Akintoye Benson is also one of the top shots in NURTW. One of the fashion accessories he does not joke with is his sunglasses. He is also well travelled.

Not forgetting the light in complexion, Jimoh Buhari, you will always find him within the MC Oluomo caucus. He is well connected and attends parties too. He is always seen with Comrade Akintoye Benson. He is also part if the big boys who run NURTW with mc Oluomo. He is the Chairman of NURTW, Oshodi branch E. Other Big Boys who are also part of this big boy caucus are, Sulaimon bush, Kamal Bakare (pappy), Ismail Oyeleye, Justo and Skibo, they also dazzle everyone at parties. They are very close to MC Oluomo. Smart Olayinka also belongs to the Mc Oluomo nation. He is a proud supporter of MC and he is unapologetic about it. He is also one of the top big boys in Oshodi.

Cubana’s image-maker, Chief Priest’s name is synonymous with spraying. He sprays any celebrant silly and he is unapologetic about it. He is also one of the big boys who spend in bails. A few ways back, this young millionaire celebrated 40 years and it was also another party where money spinners competed with themselves. E-Money made a statement with his 40th birthday and was amazingly put together. What of the stylish King Gushi, Oba Saheed Elegushi, he is surely on this list. His own type of king is different, he readily supports people who are in need. He is one of the super-rich big guys who spend heavily at parties. Another set of friends who belong to this category was the 2 above. The show off for the 40th birthday was huge and many supported him. Socialite per excellent, Sati Ramon is on this list, he is very popular within the social scene. He is one of the big spenders at parties, he is one of the favourites of King Wasiu Ayinde whenever he is praise-singing. Another big boy is Akinsiku of Lagos, whose real names are Oba Dosunmu. He is one of the closest allies of Oba

Saheed Elegushi. He is one guy who also enjoys praise-singing from Kwam 1. He spays heavily at parties. Nollywood actor whose spraying prowess got many people wondering lately is Zubby Micheal. He has also joined the league of big boys who mesmerized their fans with some cool cash. He was seen spraying heavily at his birthday party a few days back. Young millionaire and Igbo Big Boy, Jowizaza readily made this list, from his lifestyle, you will know he has not come to play when it comes to money, he is one of the big boys who turn party stage to money stage. Another big socialite is Ibadan big man, popularly called Onimaalu, his spraying prowess was brought to the limelight sometime last year when he sprayed in bails endlessly at a Lagos function. He is one guy musicians love to praise sing. On this list is Island Big Boy, Aare Bashiru Fakorede, he is one of the many happening guys on the island and who spends big. Not forgetting popular socialite, Olasheu, he was last seen at Lagos hotelier, Shina Okanlomo hotel opening where he spoiled the celebrant and musician silly with numerous bails of money.

Not forgetting to mention Ijebu Bigboy, Turaki Abiodun, his 40th birthday was huge and was another avenue to show off his wads of note. On this list is another set of big boys like Fuad Oloto, Oba Ota Awori, Delta Big Boys, Ayiri Emami and Counterpart Ksele, they are all celebrity big boys who spend heavily on party stage.,

READ ALSO: HOW TINUBU PLANS TO CELEBRATE HIS 70TH BIRTHDAY