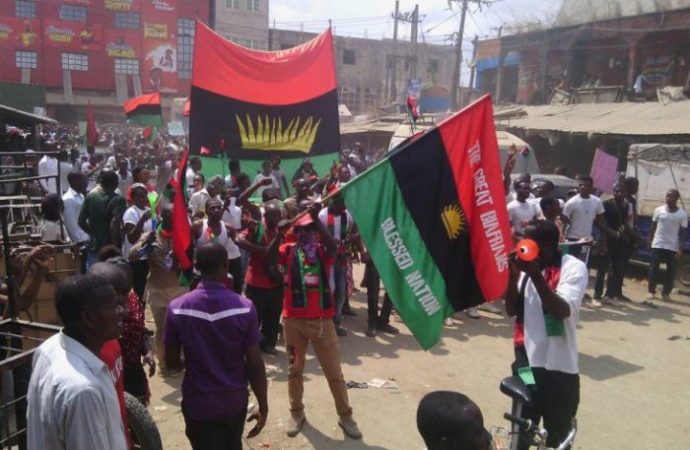 The Anambra State Police Commissioner, Garba Umar has warned that security agencies in the state will deal decisively with any group that threatens to disrupt the upcoming governorship election in the state.

Recall that the Indigenous People of Biafra, IPOB, had recently asked people of the state to boycott elections in the state and the South East in general until a referendum is granted by the Federal Government.

However, Umar, in a statement he issued after a meeting of the Heads of security agencies in Anambra State said such directive will not be tolerated.

Umar warned that security agents will not fold its arm and watch “disgruntled elements truncate” the peace in the State which they are working assiduously to maintain.

The statement reads, “Our attention has been drawn that some misguided elements have perfected plans to disrupt the relative peace through streets protests and to declare that the Anambra State Governorship Election Scheduled for November, 2017 will not hold.

“This is to achieve their selfish political aggrandizement thereby threatening democratic processes causing serious security threats in Anambra State in particular, and the Country at large.

Biafra: We will deal decisively with any group trying to disrupt elections – Police fires back at IPOB

“This is unacceptable and would not be tolerated. In as much as the Command and sister agencies respect the Right of individuals to freedom of expression and peaceful assembly, we would however not fold our arms and watch disgruntled elements truncate the peace in the State which the Law Enforcement Agencies are working assiduously to maintain.

“It is to be noted the Governorship Election has been scheduled for November, 2017 by the body responsible for elections in Nigeria and that is the Independent National Electoral Commission (INEC); and is the only competent authority that can make any pronouncement regarding the conduct of elections.

“To this end, the security agencies wish to assure the good people of Anambra State that the Election shall hold as scheduled peacefully and successfully. We will not hesitate to deal decisively with any individual or groups under any guise that will disrupt public peace.

“Finally, members of the public are enjoined to disregard such pronouncement and go about their lawful businesses. The security agencies further assure Ndi Anambra and all other residents in the State of their readiness to protect lives and properties.”

‘You are a son of darkness’ – APC replies Peter P-Square, calls for their arrest