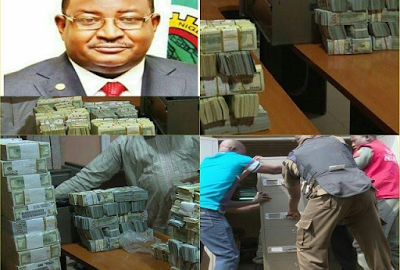 Former Group Managing Director of the Nigerian National Petroleum Corporation (NNPC) Andrew Yakubu has dragged the Economic and Financial Crime Commission (EFCC) to court over forfeiture order. LIB recalled that a Federal High Court sitting in Kano and presided by Justice Zaina Abubakar on Tuesday, February 14th, ordered the forfeiture of the sum of $9,772,00 (Nine Million, Seven Hundred and Seventy Two Thousand United States Dollars) and 74,000 (Seventy Four Thousand Pound Sterling) recovered from the former NNPC boss to the Federal Government.
In response, the former NNPC boss dragged the agency to another federal high court sitting in Kano State seeking redress on the forfeiture order. Counsel to Mr. Yakubu, Mr. Ahmed Raji, who spoke through Barrister Abdulkarim Maude said his client had applied for motion on notice seeking the court to vacate the forfeiture order earlier granted by Justice Zainab.

Confirming the development, spokesperson to EFFC in Kano, Idris Nadabo said the case is coming up on March, 7th, 2017 at the Federal High Court sitting in Kano.

Operatives of the anti-graft agency had on February 3, recovered the loot stashed in a large fire proof safe at a house belonging to Mr. Yakubu. The surprise raid on the facility was sequel to intelligence which the commission received about suspected proceeds of crime believed to be hidden in the slums of Sabon Tasha area of Kaduna State