How The APC Will Take Over EKITI From The PDP 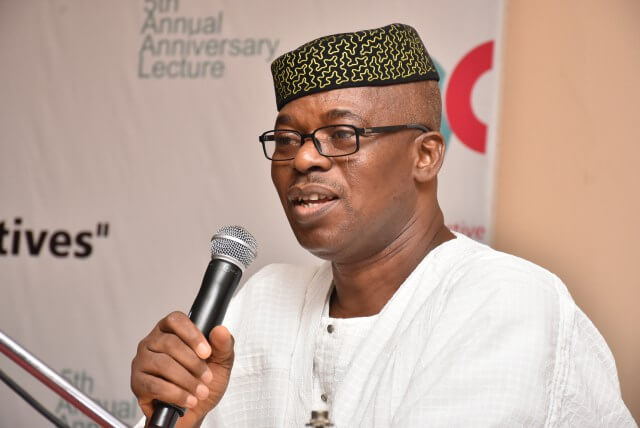 •Popular EKITI Guber Aspirant, Engr. SEGUN ONI
Engr. Segun Oni was the former Governor of Ekiti State. He is an APC top shot and a member of the national exco. He is one of the aspirants jostling for the party ticket to fly the APC flag for the governorship in the forthcoming July elections in the state. City People has gathered that he stands a good chance of clinching the party ticket at the primaries. He also stands a good choice of winning the governorship election if fielded. This is because of the solid legacy he left behind as Governor.
Last week, City People Publisher, SEYE KEHINDE spent an evening with this very refined gentleman during which he revealed his governorship ambition and plans. Below are excerpts of the interview.

Today you are in Abuja. Tomorrow in Ekiti and you could be in Lagos next. You travel around the country a lot by virtue of being a member of the national exco. How has it been juggling your various assignments?

We thank God. We are just trying to do the bit that we can, contributing our own quota to the political process.
The 2 dominant parties in Nigeria, the APC and PDP have been going through a lot of challenges, especially APC.

What do you make of all these challenges?

It is to be expected. There cannot be a human situation that will be dynamic without challenges. There will always be challenges, it is part of the growth process. This party came out of 4 or 5 different parties. We had become one. We are lucky. We worked very hard and God gave us victory at the elections. That is not all. Winning election is just the beginning, we now have to produce a blend and that is what continues to be the challenge. We would get over that.

A few days ago, Pres. Buhari gave APC leadership a shocker, over the issue of tenure elongation. What do you make of that?

Personally, my attitude is that since there are about 3 court cases, we should leave talking about it. Commenting on it will be subjudice. Let’s allow the court to resolve it.

Your name is being mentioned as one of those frontline aspirants for the governorship of Ekiti State. How far have you gone? What is the picture looking like?

The picture is looking good. I want to thank God for that. We are there. We are firmly on the ground. If you try to sample peoples opinion, everywehre, you will know the extent to which we are wanted. So, we thank God for that and we would contin ue to work on that.

Each time people say to you Eng. Segun Oni you’ve been there once, why would you want to go back there again, what do you say to them? why do you want a 2nd term?

My main reason for contesting again is because I don’t want my party, the APC to lose the elections. I believe there is this preponderance of goodwill, people are talking about, it means that could be converted to electoral win if it is required. My attitude is, nothing prevents me from running. Other people are running also, whoever the party chooses, it gives the party the opportunity for choice.

Each time you look back at the Ekiti State you left behind how does it make you feel? Has the state moved forward or not?
I am grateful to God for giving me the opportunity that he gave me to lead the state. Now, what people say overwhelms me. It means I have been appreciated. The service I gave is been appreciated by the people. It takes the grace of God to be appreciated.

As you go around campaigning and meeting people what is the message you tell them?

We are also looking at a new economic order. We are going to focus more on the young ones, the youth, age 18 to 40. We would put everything that we’ve got into ensuring that their lot is better. We assume that they should be able to cope but we are not doing anything special for them to help them to cope. The competitiveness is weighted against them. But we would do our best. We want to lift them.

What is the biggest challenge facing Ekiti State today?
To ensure that we convert the human resources to economic advantage, to productivity, because, people when they are productive are an asset to any entity. We want to find a way of ensuring that our own people are productive, not idle.

Whats your assessment of Gov. Fayose’s years in government?
No. I won’t say anything. I have made up my mind that I am not going to say anything or assess the regime in place in Ekiti.

Why?
Anything I say, they will say what else can he say. If he does not criticise him, who else will criticise him. As far I am concerned I want to concentrate on what I want to do and the niche that we have identified.

So, do you mean there is no positive thing you can say about the Fayose regime? Must it be negative?
Positive or negative, the way I see it is, if I don’t want to say negative, I should not also bother to say positive. As far as I am concerned I want to concentrate on what I want to do, the niche that we have identified that we believe will make the difference.

Within the Ekiti APC, the number of aspirants coming out looks huge and unwiedly could the party not have managed it?
No, I disagree with you. The huge number shows that we have a viable party because there are parties now that are looking for candidates and they are not getting. So if we have this number of aspirants, the first indication is that we are a very viable party.

You’ve been governor before. What are the lessons that you learnt in office?
The lessons are numerous but the summary of everything as far as I am concerned is that Service is the main thing. Give your Service to the people. Leave them and posperity to judge you. Continue to give service conscientitiously. Service is the key thing. Service is the crucial thing. Give your service as honest as possible, as best as possible without trying to exploit the society and without trying to corner the opportunities of government for personal use. The slogan is give your service and leave the rest to posterity.

That is a very important legacy. There are quite a lot of important things. Some of the legacies of cause have been taken out but that is one that is still on.

Ekiti State has produced many Professors and Lecturers, but how come all of that has not been reflected in the running of the state?
Yes, Ekiti State has made a lot of contributions to academia but Nigerian mentality has suddenly become monetised. So monetised that if you describe somebody as a Professor in a particular field, the next thing they will be asking is how much money as he brought. The monetisation mentality has taken over. It has denigrated values. That a state that has the highest number of Professors per capita doesn’t seem to look important is part of the value system we must change. We have a state where virtually every community will be able to point to one or 2 professors.

Many people believe that it will be difficult for the APC to beat Gov. Fayose and the PDP in Ekiti. They feel Fayose is so popular that if he fields anybody for governorship the person will win landslide. How do you react to this?

(He smiles) No. No. No. This is not true. If you go to Ekiti and see for yourself you will know it is an exagerated view.
Let me tell you very, very clearly and I want you to investigate it and I want to throw this as a challenge to the Press. Go on the street of any town or village in Ekiti and go and conduct your own mini-surveys, your mini-polls and ask: what are the expectations of the people?

It is then you will realise that this assumption is not right. Its not going to be tough at all. The only thing is that the people of Ekiti are only adding a Caveat which I am hoping that my party will listen to. They are saying if you field so, so, so, you will have no problem in the elections and they are saying it very loud and they are not mincing words. So, if we do what Ekiti people want, the people will do what we want. And it will be like water flowing down the hill. Its going to be pretty easy for us.

More specifically sir what are the Ekiti people saying?
Haa! it not me that will tell you. I will not say it because it will be very vain of me, very vulgar of me to say the Ekiti people are saying this. Try and find out. Let anybody or group of people go out and verify. At situations like this, nothing stops the NUJ from coming out and saying we want to do a poll and try as much as possible to make it to be very, very objective, professional. you can say this is our poll. I believe the people are talking out.

How The APC Will Take Over EKITI From The PDP was last modified: April 2nd, 2018 by Seye Kehinde

Ghost is out for Revenge! Watch Teaser for Season 5 of Power on BN TV