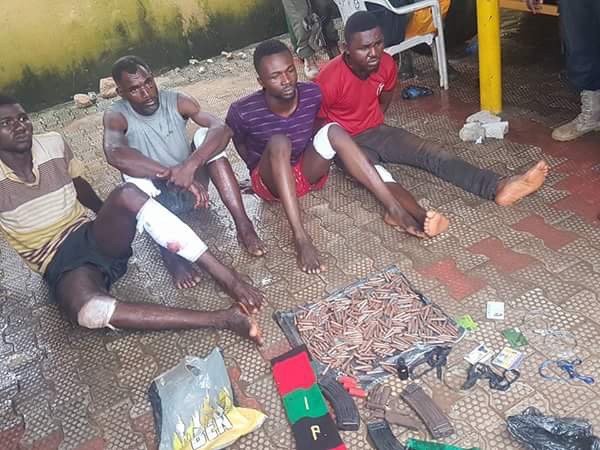 A Nigerian soldier who deserted his post to become a Biafra Security Service trainer has been arrested by the police for armed robbery. He was arrested in Anambra alongside 28 suspects over cases of kidnapping, armed robbering, cultism and other related vices.
The suspect identified as Ebeje Nnamdi was formerly a soldier with the 20 mechanized Battalion, Taraba State.
Parading the suspects on Thursday at the police headquarters in Amawbia, the state Commissioner of poliyce, Garba Umar, said one of the suspects, Chukwudi Nwabundo, invaded the house of one Peter Chukwuemeka of Isiokwe village, Aguleri and abducted one John Ifediora of Umuganagu village to Iyi Oji shrine where he was subjected to torture.
He said the police detectives, acting on intelligence, stormed the bush at Aguleri and successfully rescued the victim.
“Police teams were promptly dispatched to cordon the area. The area was thoroughly searched where two suspects were arrested on the spot and the third suspect who sustained gunshot injuries was certified dead at the hospital.” he said. He said the suspects confessed to the crime and would be charged to court accordingly.
Umar listed exhibits recovered from them to include 336 rounds of 7.62 x 39mm AK 47 live ammunitions, 3 Eympty AK 47 rifle magazines, 1 locally made double barrel pistol with two live cartridges, IPOB wears ( headgear, mini flag, muffler), charms and ATM cards.
Other suspects paraded by the police included a 6-man gang of armed robbers over attacks and killings of policemen at nipping points, robberies at fuel stations and various points including the armed robbery at Bukachi filling Station Eziowelle on 31st August 2017.
The police commissioner attributed the success story recorded by the command to the review of its strategy on crime fighting, intensification of patrol and surveillance visibility policing.
Army Deserter Who Became Biafra Security Service Trainer Arrested for Armed Robbery (Photos) was last modified: September 8th, 2017 by Arinze Ago