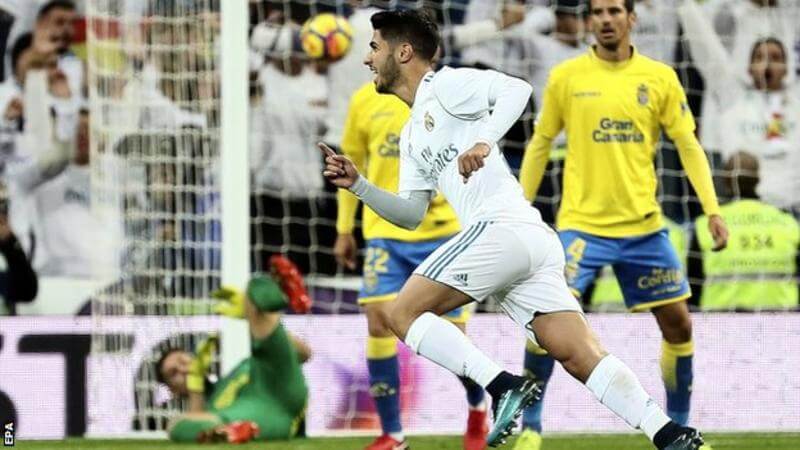 Marco Asensio scored one of the best goals of the La Liga season as Real Madrid bounced back from their loss at Tottenham to defeat Las Palmas.

Real have yet to hit the performance heights that led them to last season’s league-European double, but on Sunday the display was far better than they managed in midweek.

Casemiro’s header gave them the lead before Asensio’s 30-yard rocket of a shot put the home side in control.

Cristiano Ronaldo, who provided the assist for the third, looked frustrated on the pitch having had few goal-scoring opportunities, although he did go close with a shot that curled inches wide of keeper Raul Lizoain’s left-hand upright.

Real had 14 efforts in the first half, but the only goal came when Casemiro headed in after a corner was inadvertently flicked on by Jonathan Calleri.

It was 2-0 11 minutes after the restart when, from Lizoain’s punched clearance, Asensio struck a ferocious 30-yard drive into the top corner which left the home fans gasping.

And Isco rounded off the scoring for Los Blancos when he slotted in from Ronaldo’s low delivery in the 74th minute.

Real are now third, level on points with fourth-place Atletico, and eight points behind league leaders Barcelona, who have 31 points.

Asensio Leads Real Madrid Back To Winning Ways With A Stunner Against Las Palmas was last modified: November 6th, 2017 by Damilare Salami