Home Entertainment At 64, I Am Not Ready To Quit Singing Yet – Gospel Music Star, Evangelist FUNMI ARAGBAIYE
Entertainment 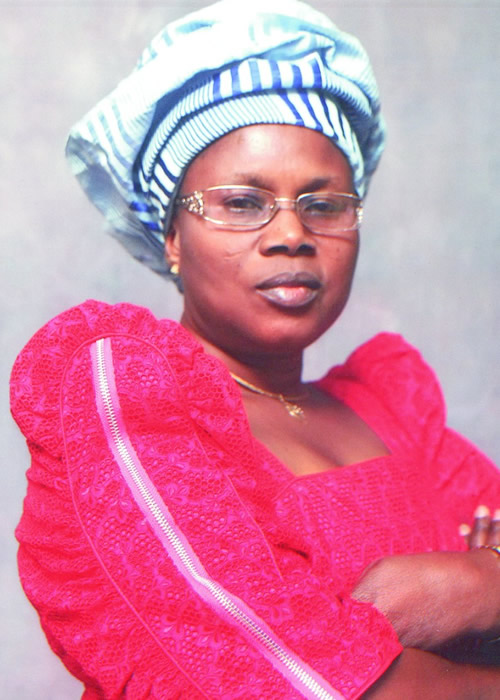 Evangelist Funmi Aragbaiye is 64. But you won’t know. She’s that far gone in age. She looks sweet. She’s aging gracefully. She looks so refreshingly young. Over the years, she has maintained her pretty young look. She is natural in her ways. She hardly makes up and she has left her ebony complexion to glow, using Shea Butter (local Ori). And her voice has remained sonorous, giving her songs the much-needed vitality.

She is a gifted music act who sings rich Gospel music.  She is the President of the Gospel Musicians Association of Nigeria (GOMAN). Since the 80s, she has been rocking the gospel scene, with one track after the other.

Few weeks back, she spoke to City People Publisher, SEYE KEHINDE in the comfort of her Ibadan home about her 35 years in music which has seen her winning awards, after awards. Below are excerpts from the interview.

What have you been up to in the last few months?

My activities have been dominated by the church and social programmes, performing with the band, traveling all over the country and even outside the country.

What has been your sustaining power all these years?

It’s God. Without God, in one’s life, you can’t get this far. My Civil Service experience has also helped. I worked in the Civil Service from Government Press in 1972, to Nigerian Herald, from Nigerian Herald in 1976 to Sketch Press Ltd. We left Sketch in 1980. my husband was then appointed as the Chief Press Secretary to late Chief Adekunle Ajasin. So, I now transferred my services from the Sketch Press to the Ministry in Ondo State. I worked in the Ministry of Finance, Ministry of Commerce and Industry, Education Department of Establishment and Training and many other ministries. When the Shagari Coup took place we had to return to Ibadan. So instead of returning back to Sketch, I transferred to the Oyo State Civil Service, where I worked in similar departments, in virtually all government departments.

At what point did you go into Gospel music?

Let me say that the foundation of what I am today was built at Ilorin, I was along Amilengbe Street, Ilorin in those days, where you had the ECWA Church. That is where I started singing. But I have been singing all the way from All Saints School, Ondo, to Ilorin. But my music career started at the ECWA Church in Ilorin because I like their sonorous voice and like the message of their song. They always play it on a raid in those days. That was how I got interested in music. After I left the place, I continued. I started writing and composing songs and in the 80s, I think it was 1982/83, the Lord called me into the Music ministry. At the initial stage, I was like, no. I am not going to go, because I wasn’t interested and I didn’t know what God had in stock for me at that time. But when God says Yes, no man can say no. So it was not until 1983 that I started writing all these songs you are hearing today. God started showing me what will happen in this country.

You will recall that I became popular through one of my songs Sioni Ilu Ayo, Jerusalem Ilu Ogo. On side 2 of that album, that came out in the 80s, is Olorun Igbala, Olorun Ayowa then Let Your Peace Reign Oh Lord, We Pray Thee. God showed me a lot about the Muslims, killings the Christians in North. I reduced it into a song. My calling has to do with preaching the Gospel of Jesus Christ on earth. Preach against the ills of the society. That is why I like to talk about happenings around me because if you say you are truly called into Ministry, it shouldn’t just be praise and worship alone. You should be able to talk about various topics and happenings. The source of my inspiration is God and the Holy Spirit. That is why all my songs are spiritually inspired because there are calls and there are calls. Mine is a divine call.

How many albums do you have to date?

I have almost 30 now. I just released the video of one.

How have you found being President of Gospel Musicians Association of Nigeria (GOMAN)?

It is a call to serve. We are going to be 3 years this December we did inauguration year before the last in December. The experience has been ok. It is another ministry entirely, putting people together from all works of life, different types. Trying to make them know how to be a member of an association like GOMAN, through your contributions and attending meetings. A lot had gone wrong in GOMAN in the past. That is what I am trying to do now, putting things right. The challenges have been getting the popular artistes to attend meetings. Nobody is interested in anything.

At what stage is Gospel music now?

At the stage at which we now use modern technology to record, as against the olden days when we use manual. Digital is always cleaner and clearer. In those days when I was going to start, I didn’t start with the mindset of I want to make money or I want to be glamorous. We regard it as Call to serve, in those days. But these days, the difference now is that people want to come up, they want to sing at all cost. That is why you find them singing commercial music. You can’t eat your cake and have it.

You have your own style of singing and dancing, stagecraft. How did it evolve?

When I was going to start I told God that I wanted to be unique and I want to be on my own. I don’t like to copy people at all. That is why at all times I have more than enough songs to sing. People will always want you to sing common choruses so sometimes I put it in. But definitely I am just on my own and it is a talent from God. That is why I said there are calls and there are calls. If you have a divine call upon your life you will be unique, you will stand out among others. If it’s about songs you will always let people know that you have something to say.

One of your albums was a big hit years back. Did you think it will sell millions of copies?

I knew it was a good song. When I released Olorun Igbala, the first one where you had Cioni Ile Ayo, I knew it was good. That was released and distributed by Decross Gospel Music, owned by Evangelist Prof. Ebenezer Obey. When I released the 1st one, I was just lucky. That was the 1st one that brought me to the limelight. And it became an instant hit. I am talking of Cioni song. It was the 1st one and it became a big hit. It was like everybody has been waiting for it. It sold a lot. It was so popular. The song still remains an evergreen song till today. I wrote the song in 1983 and it came out in 1989, under Decross label. It was after it came out and it became a success that Sony Music decided to snatch me from Decross Gospel Label. Then, we did Mo gbo Ipe Olorun mi. When that one came out, that one sold millions. It sold a lot. It shook the gospel music industry to its very foundation. It was produced by Laolu Akins. The production quality was perfect. That was why it sold a lot. The publicity was massive since then it’s been up, up, up. That is where you have the popular song Eba wa tun aye wa se ooo. I was caught up in the studio when the June 12 crisis started. The Lord said to me, Minister to my people with Psalm 53. When that song came out the SSS were after me. I did the song at the wedding of Simisola Diya. He is Lt Gen. Oladipo Diyas son. That was Gen. Diya was No 2 to Abacha. I ministered to the people. The programme was held at the National Theatre in Lagos. It was gathering of all the who is who.

When they wanted to start the reception they said only Funmi Aragbaiye will perform. The committee in Abuja and the Committee in the South West said Funmi Aragbaiye should perform. In fact, some musicians had to use my name to enter. It was so tight. I like singing to suit occasions. That is the normal thing. I wanted to sing choruses that everybody will dance to. God said to me, don’t do that. Don’t start with such a song. God said to me your purpose at this gathering is to come and minister to these people, running this country, leading everybody astray, punishing everybody. I said ok ooo. God, I will be your own voice. But people will complain later. They may not be happy with me singing, preaching songs. When I started, the hall went up in noise. Everybody stood on their feet dancing, rejoicing, praising God. They were clapping. Some of the guests kept saying: Sister Funmi, we are enjoying Jesus in your life, fire on. It got to a stage that day that the SSS people came to meet me that, “Madam, you are abusing our leaders. They are the people gathered here. You have been invited here to come and rejoice with us, not to abuse our guests.”

There were many Governors, Ministers, top dignitaries there. Your songs are too strong. I told them at a point that I will put off my engine if you try to disturb me because I had told Gen. Diya before attending that programme, that I will be coming to perform because I like his person. I don’t want to deal with soldiers, police people, security chiefs. He said madam, you must be a tough woman ooo for saying that right before me. I said yes. I don’t hide my feelings. They went to him to report me that I am singing songs abusing and criticising his government and everybody is dancing, clapping for her. He said they should handle me with care that I am a tough woman. If she has told you she will switch off her engine she will do it. She already told me all these. She hates embarrassment. She already told me that if they embarrass her at the gate, she will just turn back. So they came to me to ask me to change my song to usher in the Bride and Groom, so I did. The SSS people said yes this popular gospel song I changed to is better. I now told God. God, I have delivered your message. That’s Funmi Aragbaye for you.

READ ALSO: HOW I GOT MY STAGE NAME, TAIYE CURRENCY 26 YRS AGO

At 64, I Am Not Ready To Quit Singing Yet – Gospel Music Star, Evangelist FUNMI ARAGBAIYE was last modified: September 17th, 2018 by Seye Kehinde