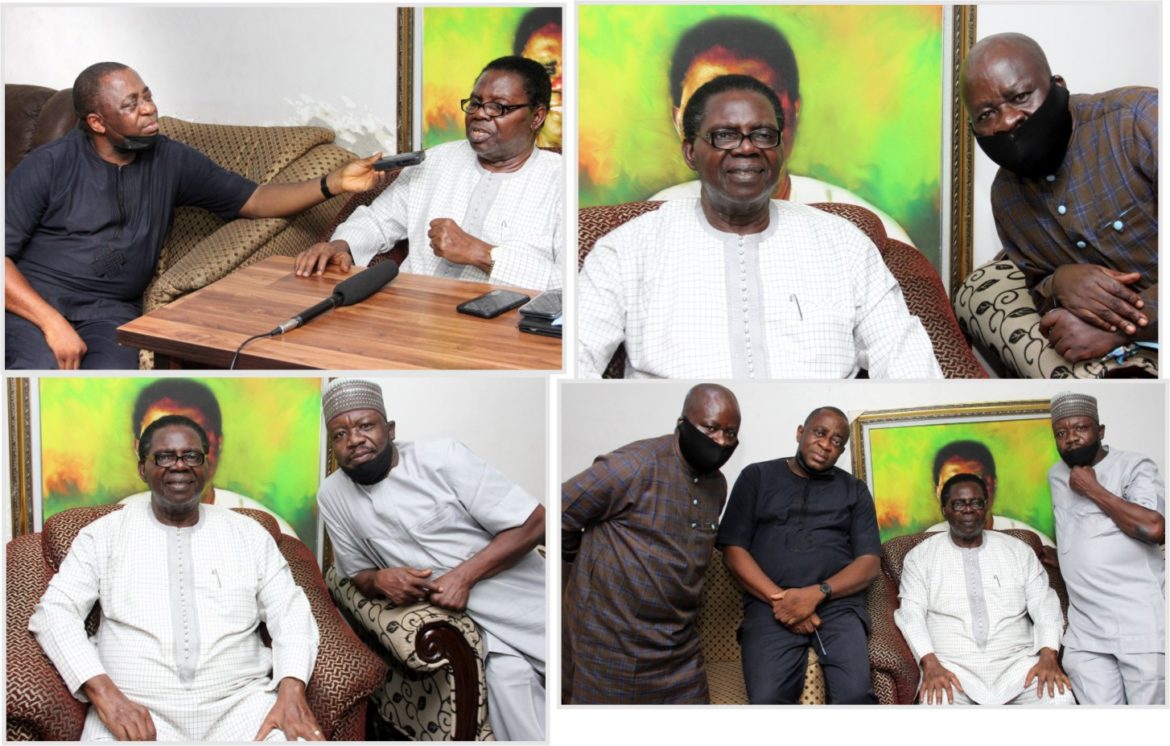 •Reveals What Many People Don’t Know About Him

On Wednesday 6th October, 2021, the Management of City People Magazine stormed the private residence of Chief Commander, Ebenezer Obey to present him his Grand Commander of Music in Nigeria Award in honour of his meritorious career spanning over 60 years. The event was part of the ongoing City People @ 25 anniversary.

After the presentation of the award, City People interviewed Evangelist Ebenezer Obey on life at 79. It was a happy Ebenezer Obey that revealed what many people don’t know about his life.

It is very revealing. Below are excerpts of the interview.

Looking at your entire music career, how many albums have you released?

By now it is difficult to arrive at the total because we continue to add and release the special recordings. Apart from this we have released 500 CDs and the evergreen music puts it in the right perspective, how many thousands of songs we have put together. Apart from the whole numbers from the ’60s, we continue to release special request recordings. Now people want to have something for themselves to keep for record purposes. Knowing the talent God has given me, many come for special releases. As we do that it has added more numbers to our catalogues.

What was your first album and what year was it?

The first album I released was in the year 1963, it was the story of a young man who went out at the midnight to rob a shop, unknowingly to him the owner of the shop had electrocuted the shop even though he had the instrument to disconnect the trap set for him. Unfortunately, he knew only part of the trap and he thought he had seen through but another trap set by the shop owner caught him so, he was there till the next morning. The crowd gathered and were able to put off the light and get his body. It was an alarming topic and I thought to compose a song so people can learn that it is best to work with our hands and not emulate the thief that lost his life.

The response was not bad. In the olden days, a single is 2 minutes 45 seconds. Just like I have told my story. Decca West Africa happened to be the company I decided to work with. I had to trek all the way from Mushin to Olosha, Alakija, Alakara, Moshalashi through to Yaba and Lagos office of Decker West Africa. I had to cross the Ido terminal and at Ido, I crossed to Carter Bridge. The Carter Bridge was the only bridge then. I took that to Idumota and journey to Adudu Oki. Getting to Adudu Oki, I saw the gateman who did not want me to enter. I told him I came to record and that my record will sell.

After I explained to him God entered into his heart and asked me to go upstairs. I got upstairs and met the secretary typing. Imagine someone who has been trecking as I was sweating profusely. The lady looked up and went back to her typing I told her “my name is Ebenezer Obey, I am a future star and my record will sell”. She said I had to come back to see the artist manager as he is on leave.

I told her how I got there but she insisted.

As we went back and forth Mr. Kres pressed his Intercom and he asked her to send me in. I was so happy so I entered with determination. When I entered I prostrated and I told him “good afternoon sir, my name is Ebenezer Obey, I am a future star and my record will sell, don’t pay me just release my record”, he kept looking at me and pressed his Intercom and called Mr. Ogunbayo to come and see me. I also told Mr Ogunbayo that my record will sell. With the way I was expressing myself, the man looked at me and said “this man is talking with so much confidence, I think we should give him a chance”. Mr. Ogunbayo also agreed. In those days you have to take your band, we don’t have what we have now that you record your demo. Artistes who were not yet artists are not allowed to go into the studio.

We were taken under a big tree to listen and to pick. Thank God that was how it started. What they do in those days is they will record all the songs in different dimensions. Mr. Ogunbayo will have to check the band, a band is like a rudiment you have to guide like a shepherd. That is why to be a Pastor, is very close to what we are doing as a musician.

The only difference is you can’t say you are a Pastor without the knowledge of the word of God. So before I started my evangelistic path, late Arch Bishop Benson Idahosa called me and said what God told him about it and told me to pray about it.

He said he was going to send me on a course because as an Evangelist you have to go and observe so you will be taught and trained and when I was called I was not doing anything and I did it with my whole heart, this was in 1992 when I was 50. So you have to guide the band by having fellowship and rehearsal, if you don’t do that you won’t be able to move with the time. If you don’t do that they will get tired of you. So, I thank God that after so many years, we are still relevant.

As a professor of music, do you still deliver lectures?

Yes, I do. At Olabisi Onabanjo University. What I was asked to do is to lecture about Ebenezer Obey’s music and nobody can do that more than me that even lecturers sat down to learn how I compose songs.

How has life been after the death of your wife, late Madam Juliana Obey?

During the 10 Year Remembrance of my wife I was in the hospital in London. We planned to celebrate it but thank God the children and everybody was able to pull through with it. When your wife leaves you, there will be a big vacuum that is very hard to fill. In my case, my late wife understood me the most. She made home pleasant for me.

When I go out and come home I have peace at home. I work with all my heart so when I am at home, I need rest and my wife understood that so she would make sure I had everything I need. There is nothing anybody can do but I miss her. I thank God.

How do you plan to celebrate your 80th birthday next April?

Everything that God wants for man, man must appreciate God so we need to thank God for life every day not only on our birthdays. But on such a landmark and historical event in one’s life when one clocks 80, one should thank God. I celebrate my birthday every year because God has been so good to me. It may be in the church but I have to thank God.

If it is not music what would you have been doing?

God knew it was music and he brought me into music that is why I am in music, if I come back again I want to do music and the work of God.