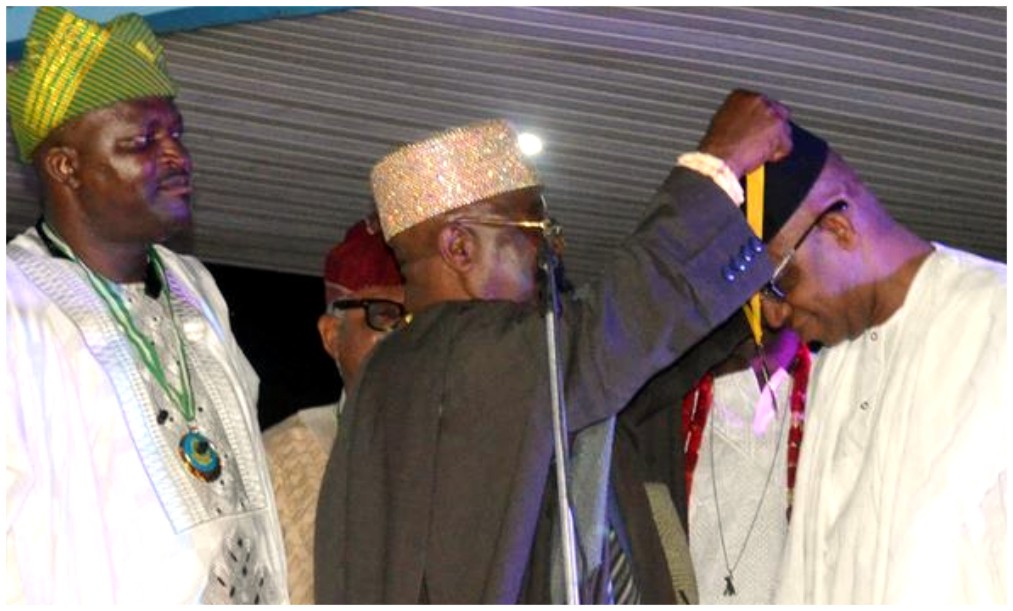 Last week, the whole of Abeokuta the Ogun state capital was agog as Abeokuta sports club, the oldest social club in west Africa inaugurated its new excos and vice patrons. The event, which was held at the Garden of the club was graced by top personalities and celebrities from and outside Ogun State. Ogun state governor, Prince Dr Dapo Abiodun was the special guest of honor, while former President Olusegun Obasanjo was the chairman of the occasion. Other dignitaries at the event were: The Alake of Egbaland, Oba Adedotun Aremu Gbadebo who is the life patron of the club; the new Agura of Gbaguraland, Oba Saburee Bakre and Alhaja Adebisi Edionsere, while Yinka Ayefele was on the bandstand. BUNMI MUSTAPHA brings you the gist from the event.

The governor of Ogun state, Prince Dr Dapo Abiodun was the special guest at the event. For the first time, since he became the governor, he stepped his foot into the oldest social club in West Africa with his entourage and he was given a warm welcome. He promised to have listening ears when next the club comes calling and also not to be far from the club which has many elites and professionals as members.

Alake of Egbaland, Oba Dr Adedotun Aremu Gbadebo is the life patron of the Abeokuta Sports Club.  He did not only came to witness the inauguration of the new exco but also to facilitate with the new vice patrons who were also inaugurated. He came with his high chiefs and they all spent quality time there.

Former President Olusegun Aremu Obasanjo was the Chairman on the occasion. Although he was out of the country, but he sent a representative to the event. In his goodwill messages, he congratulated the new president, Deacon Atilade Bolarinwa. He said he had no doubt that given his impressive leadership qualities and wealth of experience, which he has gathered over the years as a Baptist deacon, ICAN district society chairman and a leader in the Lions Club International, among others, he would discharge the responsibilities associated with the office with integrity, diligence and uncommon sense of duty and commitment, which the presidency of the club epitomizes.

Over the years, an Ogun-based event planning outfit has been in charge of co-ordinating Abeokuta Sports Club’s major events. At the inauguration, they were fully in charge of planning and co-ordination with beautiful and we’ll trained ushers who added colours and they are, no doubt, good at what they do.

OBA BAKRE STEPS OUT WITH HIS OLOORI

Oba Saburee Babajide Bakre is the new Agura of Gbaguraland, Abeokuta, Ogun State. He was installed king in a massive celebration that literally shot down Abeokuta a few weeks ago. He stepped out at the event with his beautiful wife, Oloori Omobolanle Bakre and they both sat close to Kabiyesi, the Alake of Egbaland.

The first female speaker of Ogun House of Assembly, Honourable Titi Oseni Gomez, was also among guests who graced the event. She came with her husband, wale Gomez and A few of their friends.

Mrs Ibiyemi Adesoye, the former marketing director and general manager of OPIC, was also among Ogun celebrity women, who graced the event. She stepped in with a few of her friends towards the end of the event.

The two masters of ceremony of the day added glamour to the event as they were both perfect with their presentations, although this is not the first time Tobi Joseph and Adejoke Shomoye would joint anchor events, but at that particular event, they waxed extraordinary. Tobi Joseph is a popular on-air personality, one of the pioneer presenters of the first private radio station in Ogun State, Rockcity Fm, while Adejoke Shomoye, otherwise known as Ewa Ede is the convener of Ewa Ede CATHY Foundation, she is also into local fabrics and Aso Oke.

CASH MADAM NOT LEFT OUT

Alhaja Adebisi Edionsere, popularly known as Cash Madam is one of the pioneer members of the Abeokuta Sports Club. Besides, her son, Engineer Mutiu Adebowale, otherwise known as MT, who was a former President of Abeokuta Sports Club was also inaugurated as one of the vice patrons of the club. She came with her friends to celebrate with the new exco and her son.

Hon Adijat Adeleye Oladapo, a two-term Ogun House of Assembly member, and the first female to head a section inside Abeokuta Sports Club since inception, was the past mayor of Moonlight section. She is also the first female to be on the club exco. She is the social and publicity secretry of the club. She is also known to be very stylish and fashionable. She was a cynosure with her style and physique at any event she graces, but she changed her fashion to something unexpected, at the event she was dressed in a three-piece agbada with a cap to match. Her hair was neatly packed like a bride with a flawless makeup to compliment it.

THE OUTGOING EXCOS GOT PARTING GIFT

The past president, Mr Akin Ajayi, during his exit speech, listed the achievements of his administration, which he said was possible with God and his exco members. He thanked them for their unflinching support as it was always teamwork all through his tenure. He later presented awards to each member of the outgoing exco to appreciate them for supporting him.

At the early hours of the day, there was a lawn tennis competition between Abeokuta Sports Club and the Abeokuta club. At the end of the day, Abeokuta Club emerged the winner. After the sporting activities, the new visitors’ lounge was commissioned by a former head of service, Chief Odulate OFR, before the inauguration proper.