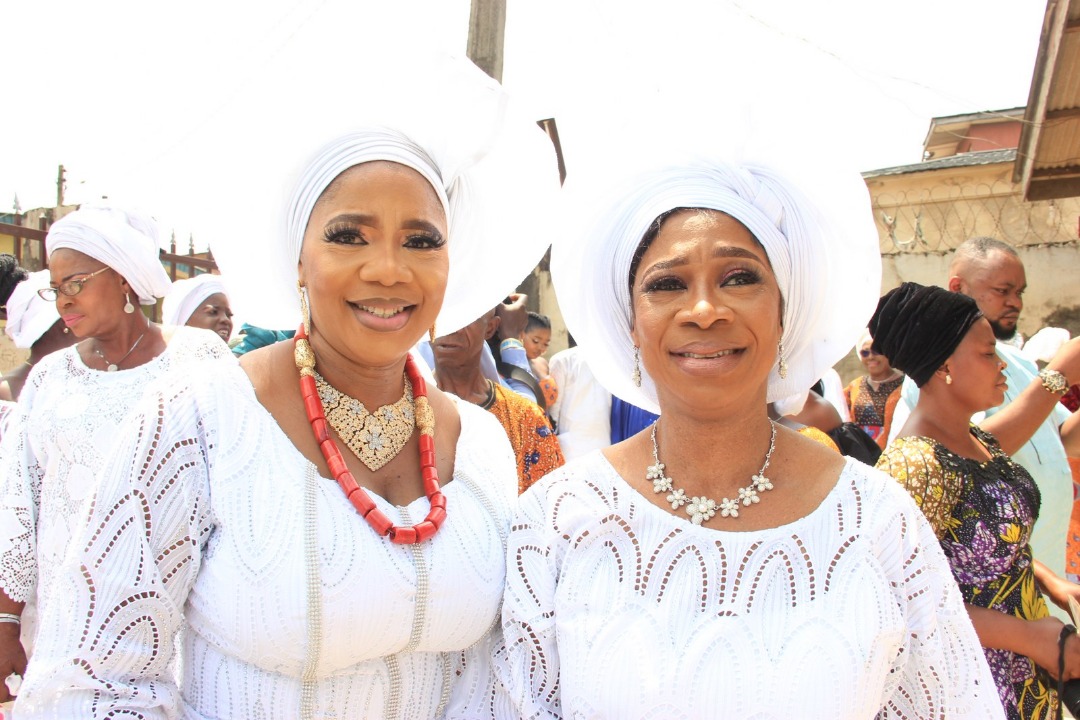 The children, family and friends of the late Madam Rasheedat Iyabode Olajire Raji made a huge statement on Thursday, October 14 and Friday, October 15, 2021, as they threw memorable funeral rites for their beloved mother. Starting from the Christian wake, the event experienced a huge turnout so much that the entire Aga community of Ikorodu was practically locked down. The event wasn’t just about the crowd alone, the people that mattered in the society trooped in to celebrate this well-spent life.

Many Nollywood actors, businessmen of high repute, friends of the popular Lagos businessman and philanthropist, Mr. Osifo Samson, members of the Arcade club and several other people left their businesses to grace the event.

City People’s Brands Editor, DAMILARE SALAMI 08155134152 alongside Senior Photojournalist, ABDULRASHEED SANNI was there and in this report, he brings you the full gist of all that went down, enjoy.

The late Mrs Rasheedat Iyabode Olajire was a renowned stenographer, typist, teacher and businesswoman in her days. She started life quite well by establishing her school of stenography where she taught people about typing, stenography and secretarial studies as well as shorthand. The school was known as Orekoya Stenographic Institute. In 1975, Mama Rasheedat moved with her husband to Lagos from Ibadan, she was married to Apostle Rufus Akinwale Raji and her school and other businesses also moved alongside her to Lagos. She single-handedly trained her children when she lost her husband at his prime in 1989. Mama hailed from Ijebu Igbo in Ogun State, she died as a passionate follower of Christ at age 72 and attended Ibukunoluwa Baptist Church in Ikorodu. The church was the closest to her house and the most convenient for her to attend at old age. She was survived by three beautiful daughters, their spouses, grandchildren and siblings.

The Ibukunoluwa Baptist Church in Ikorodu may not be very popular but it came to the limelight as every road led to the place on Thursday and Friday during the wake and funeral service of Mama Raji as she is fondly called. Everyone in Aga community, Ikorodu knew that something huge was happening as a mammoth crowd thronged to the church to celebrate a life well spent. At the wake keep, mama’s children were dressed in white and were well united with other family members to give their beloved mother a befitting burial rite.

Mama Raji was committed to mother earth at the Ikorodu cemetery. It was strictly a family affair. Only very close family members were allowed to access the place to avoid overcrowding and also uphold the Covid-19 protocols.

It was a tough and difficult moment for Mama’s children and relations. Seeing a beloved mother’s remains committed to mother earth was a pretty tough sight. Tears flowed from the children, grandchildren and siblings of the deceased.

The undertakers employed to take care of Mama’s funeral were known as the last call. They are one of the highly regarded companies in the business in Lagos. Their performance was topnotch, the band members knew their onions and they brought their experience to the fore. They became the delight of many as they accompanied Mama’s children in a dance round Aga in Ikorodu. It is a traditional way of celebrating a life well spent.

Anyone at the event would notice the style statements of the pretty babes and celebrity men and women that rocked the Ankara Aso-Ebi that was selected to celebrate this great woman in death. It was an orange and navy blue Ankara with a touch of red. Celebrities like Opeyemi Aiyeola, Tunde Dickson, Aisha Raji and many others were stunned by different styles of the Aso-Ebi.

The beautiful auditorium of AI Royal Event Center was practically transformed as guests were taking their place one after the other. It was a spacious and well air-conditioned auditorium and so, guests felt well relaxed and were in a better mood for a show of a lifetime. The auditorium also provided a conducive atmosphere for guests, there was enough space for parking, the convenience was top notch and the stage was large enough to accommodate the band and some guests.

Popular On-Air Personality, Ambassador Yomi Mate, best known and referred to as Ifankaleluya is a famous element on the air saves whose new innovation into the radio and TVs program poised to carve a niche for him amidst the competitive circle. Ifa as he’s fondly called is no doubt a force to be reckoned with in the radio and TV business as a sought-after Yoruba programmes presenter. His vocal voice remarkably stands him out of competition among his folks. Little wonder he always appraises himself while presenting as, “Ebora tí nì gbénú rédíyò dún yonmùyonmù” a clause that could be translated to mean, “A spirit dwells in radio with horrified voice”.

Through the Influence of Mr Osifo Samson, this ace broadcaster was contracted to anchor the event and he did that in style. Everyone at the event enjoyed his comedy; he was a good compere as well as an all-around entertainer.

Mega 99 Was On The Bandstand

Party lovers across the country know that Abel Oluwafemi Dosunmu, known as Mega 99 needs no introduction at any owambe. He is a popular Juju artiste and he is good at what he does. At the event, he was on the microphone for about five hours dishing different party vibes and praise-singing the society men and women there. His music completed the very entertaining evening. Many of the guests didn’t just let the music go by, they danced and had fun till the very dead of the night.

Osifo Samson is an Accountant and a Financial Management Expert and a Good Communicator with strong persuasion and Negotiation Skills. Formerly the Financial Director of Osafure (Nig.) Limited and also a Senior Consultant with Emma Elliot & Associates where he specialised in Investigating Financial Statement and Debt Recovery. He is the founder of Fosam Institute where he lectures Financial Management, Taxation, Financial Reporting and Management Accounting. He was formerly the Account Officer of Amigo International Limited. Presently, he is the Principal Partner of Osifo Samson & Co., a Financial, Management and Tax Consulting Firm whose analysts and consultants specialize in Management Accounting, Corporate and Managerial Finance, Management Consultant, Operational Management, Financial Advisory, Facilitator of Bank Loans & Overdrafts, Bank Charges Review and Reconciliation and Tax Management.

This highly respected businessman is the late mama Raji’s son-in-law; he is married to Mama’s second daughter. City People gathered that he was instrumental to the successful hosting of Mama’s burial. He facilitated how singer, Mega 99 and broadcaster, Ifankaleluyah were commissioned to perform at the event.

The party started properly with Mama’s first daughter, Olufunmilayo who stormed the dance floor in style. She was supported by all her siblings and other family members. Mr Osifo and his beautiful wife also joined and sprayed big. Trust Mega 99 to deliver when he is motivated, his delivery was mind-blowing.

It was time for Mr Osifo and his beautiful wife to rock it and they did in style. They were supported by his group known as the Arcade. They were the life of the party. The likes of Otunba Rotimi Osun, former Chairman, Ikeja LG, Alhaji M.A Fasheun, Barr Kalejaiye, Aare Olatundun, amongst several others. This dance session was more of a display of affluence than owambe. All the big boys at the event proved their worth spraying Mr Osifo and his beautiful wife.

Mrs. Adebunkola Ambode- Raji and Her Husband Too

Mama’s beautiful daughter, Bukola can’t pass unnoticed. She’s not just beautiful, she’s also a star. She is a top Nollywood actor and she pulled many of her colleagues to the event. They didn’t just attend; many of them came wearing the Aso–Ebi of the day. Her husband was equally very supportive, he was everywhere at the event, making sure that the guests were fine and well catered to.

The event was so lively and star-studded that many people will think that it was a movie premiere. From the young to the old and veteran actors, the Nollywood stars came in their numbers to show huge support for one of their own. Spotted at the event was Aisha Raji, Kemi Afolabi, Opeyemi Aiyeola, Tunde Dickson, Jide Awobona, Elemure, Ojoge and many more.

One of the biggest side attractions at the event was when veteran actress, Fausat Balogun popularly known as Madam Saje and singer, Mega 99 turned the stage into a movie scene and started entertaining the guests with beautiful and stylish dance steps. The guests had no choice, many of them brought out their phones to have documentation of the beautiful and memorable moment so that it doesn’t just fade away.