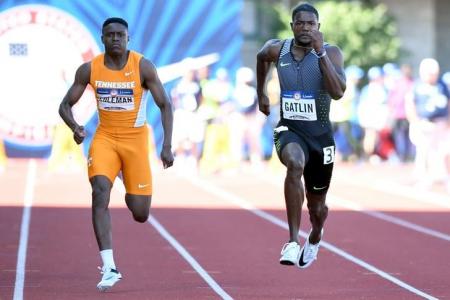 As the athletics world begins to ponder life without Usain Bolt, U.S. sprinter Christian Coleman offered hope of a bright future when he set a new 100 metres record in the College athletics.
The 21-year-old University of Tennessee runner became the ninth fastest man over 100 metres, posting 9.82 at the NCAA championships in Oregon on Wednesday.
Coleman, whose time equaled Richard Thompson of Trinidad and Tobago’s mark, broke the previous collegiate 100m record of 9.89 to advance to Friday’s final and is expected to make the U.S. world championships team.
He also has the year’s fastest 200m time of 19.85, posted into a headwind at a college meet in Lexington, Kentucky late last month.
Coleman showed great promise at the NCAA Indoor Championships in March, winning the 200m in 20.11, just outside Wallace Spearmon’s NCAA record of 20.10. He became the first man to sweep the 60m and 200m at the indoor championships since Justin Gatlin in 2002.

SEE ALSO: ARSENAL STAR, BELLERIN AGREES TERMS WITH BARCELONA, LUKAKU SET FOR RECORD CHELSEA RETURN
Jamaican sprint great Bolt is set to retire from athletics after this years’ world championships in London in August, bringing the curtain down on a career that delivered eight Olympic gold medals.
Bolt completed a ‘treble treble’ of 100m, 200m and 4x100m Olympic titles at the 2016 Rio Games, but had his 2008 relay gold stripped last month after team mate Nesta Carter’s re-tested sample showed traces of a banned substance.
The Jamaican holds the world 100m record at 9.58 seconds as well as the 200m at 19.19.