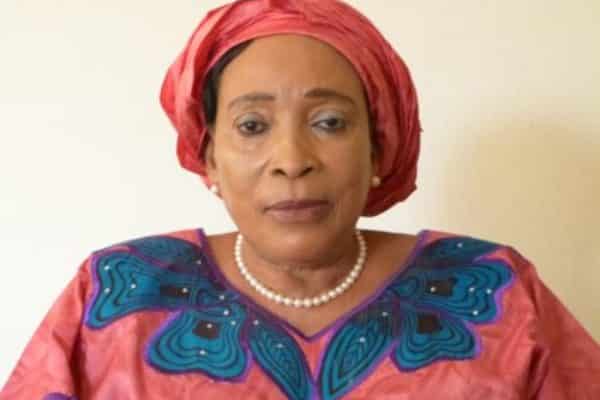 •For Her Husband Across SOUTH-WEST

Many don’t know that Hajia Amina Titi Atiku-Abubakar is a grassroot politician. She is. It has taken her husband’s forthcoming election to show the stuff Hajia Titi is made of.

Over the last 2 months she has covered over 30 towns and villages across the South-West, drumming up support for her husband.

It was inside the  Abraham’s Tabernacle Church built by OGD in memory of his father His Grace, most Rev. Abraham Adebola Daniel.

She did not mince words. She told the congregation at the service to vote for her husband and the PDP. And she went on, and on to talk about what her husband would do if he gets elected next month. Amina Titilayo Atiku-Abubakar, is the wife of former Vice President of the Federal Republic of Nigeria, His Excellency, Atiku Abubakar, who is now running for office to be the next President of Nigeria. She’s an advocate of Women and Child rights. She is the founder of Women Trafficking and Child Labour Eradication Foundation (WOTCLEF) and the initiator of the private Bill that led to the establishment of National Agency for Prohibition of Trafficking in Persons (NAPTIP).

Titi, the first wife of Atiku is upbeat and back on her groove, as you read. Her newfound vivacity stems from her dreams of a second chance in Nigeria’s power corridors as the race for the 2019 presidential election hots up. These days, Titi goes round Nigeria mobilising people, especially women to support her husband’s presidential ambition. That was why she came to Sagamu, Ogun state last week with a forty people team to represent her husband, who was the Special guest of honour at a former Ogun  governor,  Otunba Gbenga Daniel’s annual thanksgiving and memorial service.

After recognising the major  dignitaries in the congregation, the stylish woman proceeded with her speech.

“Ladies and gentlemen, my husband is the special guest of today, but unfortunately, due to the exigencies of work, because we all know that campaign has started, so he is not here physically, but his better half, that is me, standing in front of you.

We have to give thanks and glory to God, every year, our governor usually gives thanks to God, 365 days make a year, and it is God and marvelous in God’s eye that we should give him thanks and glory, that is why we are all gathered here today to give God the glory and thanks, because today many are not alive, so, we have to give God the glory and thank for making us to be among the living, so we thank you Otunba for what you have done. You know in Nigeria of today, I cannot, but do a little bit of campaign. You know my husband, Atiku Abubakar has been the only one propagating restructuring. He said it is only restructuring that could get this country united again, as the power at the centre is too much. The wicked ones as the ones suffering the poor.

“You know we women, we are very prudent, women I thank you very much, I also thank men too, women we look onto you on that day of election, please our mothers you have to come out, our place is not just the kitchen and the other room, please don’t make yourself clappers and dancers, we want to go for the best, and you know we women are very prudent.

“My husband is not here, but I know he is going to do more for the church, but let me just announce a donation of five million to the church. Our women, our mothers, our sisters, praise God, I am enlightening you that the time to release ourselves from the slavery is now , and it’s Atiku that can free us from this slavery, our children who are graduates without a job, Atiku will provide employment, the market women will; be empowered, you know great things start small, all our rural areas will be powered with electricity, and pottable water, including health centers, hunger will leave Nigeria , I Titi, a proud daughter of Ijesa, you know I’m from Ijesa and we don’t just make mouth, if we say we will do it, we will, because of is, I am appealing to you to come out on the 16th of February to vote for Atiku, we want to free ourselves from slavery. “

While her husband enjoyed his time as the nation’s number two citizen, Hajia Amina Titi Abubakar was one of the women, who dazzled the social scene with their presence. The aura of power followed her wherever she went, attracting a bevy of admirers desirous of getting the good graces of the stylish woman of means. But then, the life of influence and power came to a halt, and the fair-complexioned matriarch of the Atiku family took a break from the public eye, following her husband’s exit from office.

Chief (Mrs.) Amina Titi Atiku-Abubakar, from the Albert family in Ilesa, Osun State is a Yoruba woman born into a devout Christian home. She had her primary education in Lagos and her secondary school education at St Mary’s Catholic Grammar School in two, Osun State.

Her other educational accomplishments include a specialist course in Hotel Management at the Scuola International de Science Turistice in Rome, Italy, a Post-graduate Diploma and a Master’s degree in Business Administration from the University of Abuja. She was also awarded an Honorary Doctorate Degree of Entrepreneurship from Joseph Ayo Babalola University, Osun State. She is the first wife of the former Vice President of the Federal Republic of Nigeria, His Excellency Alhaji Atiku Abubakar, the Wazirin Adamawa and now the Presidential Candidate of the Peoples Democratic Party.

There is an interesting story about how she met her husband: In the early 1971, on her way back to Nigeria from the Republic of Benin where she had visited her aunt, she was passing through Customs formalities at the Benin-Nigeria border when the Customs Office demanded duty for the brocade material that was given her as a gift by her aunt in Benin. A disagreement ensued about the amount of the duty she was expected to pay since the material was a gift. One of the head Customs Officers overheard the argument and summoned the officers to bring the future Mrs. Atiku-Abubakar to his office. There, he dipped his hand into his pocket, paid the duty, gave her the receipt and said he hoped they could see each other again. They did see each other

again and got married in 1971. The union produced of four wonderful children – two sons and two daughters.

And the rest, as they say, is history.

In 1999, her husband became the Vice President of Nigeria and served for a period of eight years under the glorious Presidency of His Excellency Chief (Dr.) Olusegun Aremu Obasanjo, GCFR. During that period, Chief Mrs. Atiku-Abubakar founded the Women Trafficking and Child Labour Eradication Foundation (WOTCLEF).

While in Rome to further her education between 1986 – 1987, she saw many Nigeria girls on the street. After making inquiry, she realised that most of the girls prostitute for their madams, who often do not pay them.

The aim of the Foundation was to combat exploitation and trafficking of women and children. Since then, she has devoted her time to promoting and enhancing the services delivered by WOTCLEF to exploited and trafficked children and women in Nigeria.

It is instructive to note that this pet project of hers was the incentive for the enactment of the National Agency for the Prohibition of Trafficking in Persons Bill, which was signed into law in July 2003 by the former President, Chief (Dr.) Olusegun Obasanjo. It is also worthy of note that the little seed which she sowed then has now become a mighty oak as WOTClEF and NAPTIP continue to impact positively on our society by considerably reducing the scourge of human trafficking. So popular and impactful is her pet project that it has now become a household name not only in Africa but across the globe. WOTClEF’s commitment to the betterment of the Nigerian women and youth empowerment and safety is her life-long commitmentto the betterment of all in Nigeria.

The pet project she founded as the wife of the Vice President was also put on the back burner. The Women Trafficking and Child Labour Eradication Foundation (WOTCLEF), today, Titi has been going round giving motivational talks and people believe that Titi is trying to come back into the happening crowd.  She is fluent in Yoruba, Ibo, English and Hausa.